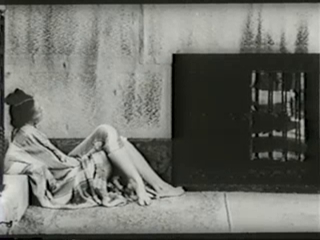 What to make of Moment to Moment, Robert Downey's 1975 sketch-format feature film? Following in the wake of rather more professional, organized and (relatively) big budgets romps like Putney Swope, Pound and Greaser's Palace, it in a sense marks a step backwards to the shambling, purposeless derangement of Chafed Elbows (1966) and similarly centers around a series of deft and goofy comic performances from Downey's writing partner and muse Elsie (L.C.) Downey. 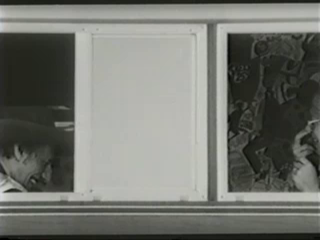 "Why don't you go outside and make a movie?"

In a sense, this 85 minute affair, available in its original cut as an AVI ripped from a DVD-R ripped from VHS (until recently the fate of most of R.D.'s films), or in a new re-edit on the Eclipse Box Set Up All Night with Robert Downey Sr., can perhaps best be understood as a love letter from Robert to Elsie. With her rumpled, flexible and somewhat piratical face (it's no surprise to see her don eye-patch and head scarf to impersonate a character called Granola) she seems the perfect vessel for Downey's morbid impishness. The film, shot on grainy 16mm b&w, mingles home movies (featuring a slumbering Robert Downey Jr.) and holiday footage with aimless skits, some only a few seconds or a single line long: Mrs. Downey's ability to transform herself via cartoon voices, unconvincing cockney accents and comedy walks allows her to feature in most of these, alongside veterans of improv and underground such as Seymour Cassel and Michael Sullivan. 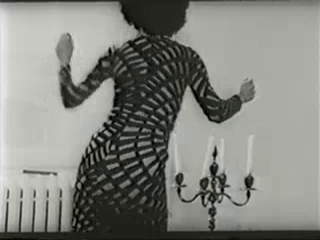 The sketches mostly avoid recognizable punchlines, crashing into one another via non-sequiturs and puns. There's undoubtedly a love of language on display, as expressed in the film's alternative title, Two Tons of Turquoise to Taos Tonight, (chosen because Universal threatened to sue over similarity to their John Travolta vehicle Moment by Moment, made three years later) and it's tempting to speculate on the method of creation involved. My own theory is that Mr. Downey may have set up shots of actors and then invented dialogue with them that seemed to match the faces. It also feels like the movie is driven more by a sense of visual, musical and verbal rhythm than by any other logic. There is a rhythm to comedy, and some comedians have gone so far as to suggest that once an audience is in step with it, you can almost say anything and get a laugh so long as the rhythm is right. At times, Moment to Moment is pure comedy rhythm, dispensing entirely with comedy content and attempting to keep the laughs coming or the audience watching just by following its own demented beat.

"These days, to be crazy, you have to be fucking nuts."

It's also in unspeakable bad taste, but that's part of Downey's sensibility, which is the broadest kind of satire, aimed at making everything seem ridiculous. This is, after all, a man who claims to have been discharged from the army at the height of the Cold War for faking a nuclear attack. Dispense with dull formulations like "You would have to be high to find this funny": watch it while straight and let it make you high, or at least confused, ennervated, itchy. Downey calls it "A film without a beginning or an end," but he's doing himself a disservice: it's also without a middle.