That Obscure Object Of Desire screens tonight at BAM as part of their Buñuel retrospective, July 11 - August 14). 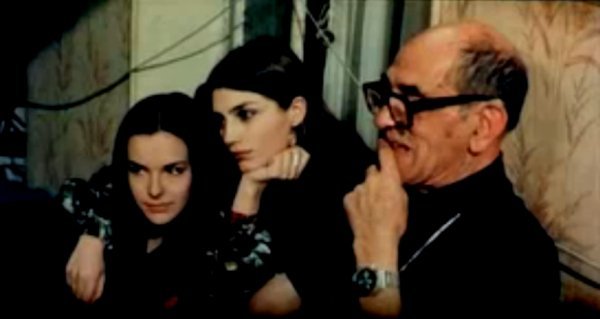 Pauline Kael may have dubbed David Lynch “the first popular surrealist,” but the honor is more accurately bestowed upon Spanish maestro Luis Buñuel. Though his Salvador Dalí collaboration, Un chien andalou (1929), is regarded as a touchstone of the movement, it was not until later in his career that Buñuel would exploit the very meaning of the surreal, brashly straying from his contemporaries’ aesthetically driven impulses. With the respectively never-ending and never-beginning dinner parties of his elliptical masterpieces The Exterminating Angel (1962) and The Discreet Charm of the Bourgeoisie (1972), Buñuel’s breed of Surrealism drew itself so close to the upper middle-class quotidian, it became far more subversive than any old melting clock. The conceptual hysteria of his films is in turn grounded by a simplified mise-en-scène; the surroundings are such that any outlandish yarn appears rooted in reality. As Michael Atkinson describes it in his Criterion essay on Diary of a Chambermaid (1964), “It was a worldview fraught with contradictions…visually Spartan and yet spasming with bouts of the irrational.”

One of Buñuel’s most clever conflations of reality and its surreal plane rests at the heart of his final film, That Obscure Object of Desire (1974), and his decision to cast two actresses as the singular, titular concept. The story goes that Maria Schneider originally won the role of Conchita, a terminally unemployed, romantic shyster of a flamenco dancer from Andalusia. Not long into production, Buñuel was at wit’s end with Schneider, so much so that producer Serge Silberman threatened to abandon the project all together. Like some ecclesiastical intervention, Buñuel got the idea to replace Schneider with Carole Bouquet and Angela Molina, as two sides of the same coin. The women not only differ physically – Bouquet is your fair French waif, while Molina is the voluptuous Spaniard – but their disparate dispositions foreground the character’s unpredictable nature. Of course, Buñuel’s casting liberties are never addressed by Conchita’s fellow characters, especially not our anti-hero, Mathieu (Fernando Rey).

As he did in Tristana (1970), Rey plays that predatory, bereft nobleman with an earnestness that belies his tactics. He is not nearly as manic as the magnetic Arturo de Córdova, his possessive, paranoid counterpart in Él (1953), but rather flabbergasted, endlessly stumped by the futility of his courtship. Though Mathieu first meets Conchita in his own home, where she has been hired as a chambermaid, it is notably not the first time the audience sees her. Again, as he does in Él, Buñuel utilizes a framed narrative to ensure both a degree of theatricality and a safety net in his relation of men scorned and women vindicated. Mathieu launches into his beleaguered history with Conchita after his first class compadres witness him dumping a bucket of water on her head as their train leaves Seville for Madrid. “Let me assure you,” he tells them, “I am not a lunatic.”

Fair enough. What he is, however, is a man possessed by the very notion of possession. Like many of his ilk, Mathieu does not want Conchita so much as he wants to own her. Hardly a surreal concept, and yet the way Buñuel banks off the actresses’ distinct personas, perpetually inverting the power dynamic, earns the film its most sneakily absurdist flourish. Buñuel accomplishes the unfathomable by dissecting and rationalizing what, to his protagonist, appears as utter flippancy. Though the interchanging of the actresses is arbitrary at first, they gradually settle into their roles. Bouquet is more or less the straight woman: she wears skin-tight culottes like a chastity belt to bed, and carries an aloof posture wherever she goes. She welcomes Mathieu’s advances, but only when the beneficiary is her mother’s malnourished pocketbook. Molina, by turns, oozes sensuality, openly teasing Mathieu with her body language as much as the literal. “I love you,” she says, “But I don’t feel like making love to you.” Readily capable of pulling herself back from the brink, she nonetheless represents the unbridled, the corporeal – a most fickle seductress.

The stakes in the duo’s dizzying dance are established early enough when Conchita tells Mathieu she is a mocita, which literally translates to “young girl,” though it’s meant to signify her virginity. She baits Mathieu with said object of desire in exchange for his security, but there’s nothing perverse about her withholding. As she explains it, “I belong to no one but myself, and I’ll stay my own.” In the film’s final act, after Conchita and her mother are deported to Seville, Mathieu buys Conchita a house to keep her from the lecherous, bone-headed tourists who hole up at the flamenco club where she moonlights as a nude dancer. Placing the deed and key in her possession, Mathieu is told to return at midnight the following evening for a surprise. What he finds is salacious in all the wrong ways. Enclosed in her courtyard, Conchita gleefully relishes her newfound freedom while Mathieu rattles at the front gate. “I can’t stand you,” she seethes. “Your slightest touch makes me sick.” When he fails to depart after this dressing down, Conchita fetches El Morenito, her guitarrista, and the two copulate over cobblestones.

At last, you’d think, Conchita’s motives are laid bare. But again, Buñuel pulls the rug out from beneath the viewer. The staid-as-usual Bouquet visits Mathieu at his compound the next day, just to make sure he’s alive. “I thought you loved me enough to go off and kill yourself,” she says. They go inside, and the erratic Molina appears in her place. “You think that by giving me a house, you own me,” she chides, echoing an earlier sentiment that she cannot be bought. Mathieu then pummels her until she exclaims that her indiscretion with Morenito was a “charade,” that she is—thank god—still a virgin. Hot blood running down her teeth, she smiles up at him: “Now I know you love me.”

Here, Conchita’s exquisitely inscrutable logic clicks into place. She never wanted Mathieu to express his love through monetary means, but only through his emotions, which he has now accomplished with this hideous display of jealousy. That Obscure Object of Desire is surreal insofar as it depicts an extreme that is horrifically logical: the inability to express one’s true emotions. The film presents a world in which a woman is capable of pathologically taunting a man who tries to buy her affection, if only because they cannot clearly communicate their honest desires to one another. Just how far removed from reality is this? Furthermore, it is Buñuel’s dual casting that would seem to play the absurd to its hilt, but by cleaving Conchita in two, he is able to at least somewhat rationalize her muddled actions. The presence of Bouquet and Molina becomes a surrealist red herring.

After the browbeating, the question then becomes how will Conchita and Mathieu live in affectionate harmony. Well, they can’t. Which is exactly why the nebulous acts of terrorism that punctuate the film (Revolutionary Army of the Baby Jesus, anyone?) finally serve their purpose. As our doomed couple strolls through a Parisian mall, idling before a woman who needlepoints a bloodstained tablecloth, the airwaves report the latest fatalities. The music swells, drowning out their exchange; Molina tags in for Bouquet one last time, and as they begin to bicker, Conchita and Mathieu are engulfed in flames. Without ever consummating that obscure object of desire.