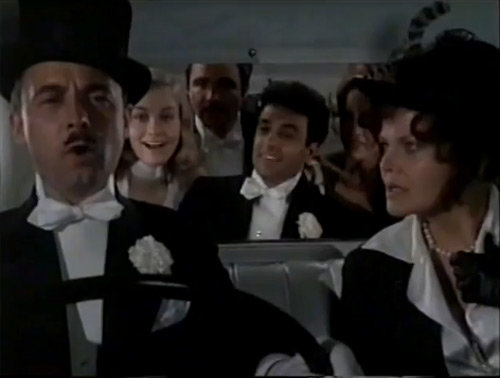 I saw Peter Bogdanovich's At Long Last Love (1975) at Anthology Film Archives as part of its Hollywood Musicals of the 1970s series and had that uncanny experience of falling in love with a movie that everyone else seems to hate. The movie is almost universally panned. Its Tomatometer score is just 10%, Pauline Kael called it "stillborn" and "vapid," and even my favorite critic, Jonathan Rosenbaum, called it "probably Peter Bogdanovich's worst film." But I couldn't help myself: I loved it.

Some people aren't interested in film criticism because opinions are subjective. To a certain extent, we'll always be imposing our own values onto works of art rather than drawing out the ideas and attitudes that we suspect rightfully belong there. But since our emotional response to a film often derives—even subconsciously—from our interpretation of it, our evaluations are trapped in a circular loop, since we're judging movies based on ideas we may have introduced to them ourselves. Did I enjoy this movie, I wonder, because I was imposing my own concerns onto an undeserving film?

Like a lot of movie buffs, I've always rooted for Bogdanovich because of the interviews he did with the old Hollywood directors, and though I like most of his movies, I've never felt a passionate connection with his work. He always struck me as a bit square. Unlike other directors of his generation, he seemed disconnected from the fervor of the 1970s. I imagine Robert Altman getting high on the beach with a cabal of mystical vegetarians, having a rambling 4 a.m. conversation about the best way to make blackberry wine. I imagine Cassavetes pacing frantically between stacks of unread teleplays on the floor in his study, Glenlivet in hand, gesticulating to Falk and Gazzara as if his brain were about to set fire to his eyebrows. But I imagine Bogdanovich strolling through a shopping arcade in Beverly Hills, stopping in front of a window display now and then to share a pensive exhalation with Cybil Shepherd over a particularly imaginative presentation of silk cravats.

That's why I was surprised when I finally saw the film; it made me begin to think of Bogdanovich as an avant-gardist. While he may seem merely to be replicating a 1930s musical, many of his stylistic decisions are strange, if not downright perverse. The significance of this formal perversity, though, is at the heart of my understanding, and thus of my judgment, of the movie. To me, many of Bogdanovich's stylistic decisions manifest a goofy nonchalance that functions as a kind of carapace against the impossibility of the romantic relationships on screen. Most people criticize the film for being fluffy and inconsequential, for having "bad" singers and "bad" acting. If, on the other hand, the inconsequentiality of these characters' relationships is not a mistake, but in fact the subject of the film, if the "bad" acting is not a mistake, but a commentary on the incompatibility of these relationships, then we have another story. To my mind, the film is not superficial, but is about how its characters wear their superficiality to stave off the inevitable disenchantment of life. 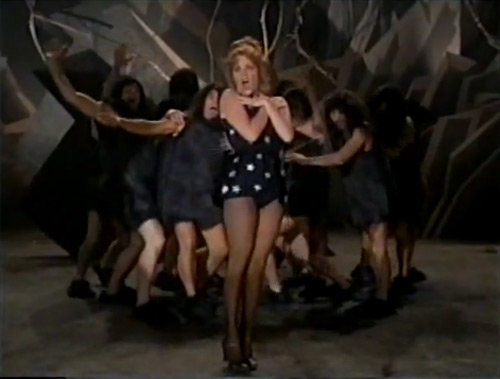 This description may seem farfetched for a movie that's so obviously just a lark. The characters are two-dimensional, the tone is lighthearted, and the plot is loosely strung together as an excuse to include as many Cole Porter songs as possible. And these aren't just the classics, but also some obscure ones with those introductory verses that emphasize Porter's loopy wordplay as much as his winking sophistication. Everyone sitting near me was laughing just as hard as I was when Madeline Kahn sang, "Find Me a Primitive Man", or whenever John Hillerman and Eileen Brennan reprised "But in the Morning, No." But occasionally, a kind of surrealistic nihilism showed through. When Burt Reynolds sang his verse for "At Long Last Love"—the emotional crux of the film—he was shaving in front of a mirror. As he asked himself whether his new affair was finally the real thing, he cut himself again and again, then dabbed at his wounds with strips of toilet paper until he'd made his face look like a ghostly shrub willow. Despite the scene's frivolity, I couldn't help but see his self-mutilation as a metaphorical suicide attempt. In this sense, the movie reminds me of some of the best Burt Bacharach-Hal David-Dionne Warwick collaborations, whose sugary surfaces mask a deeper interest in the alienation of modern life.

I hate to spoil the ending, but I think the conclusion makes plain what's really going on. The film follows a group of rich ne'er-do-wells in which two couples meet, switch partners, switch back again, then switch one final time. That is, Reynolds-Kahn becomes Reynolds-Shepherd, then Reynolds-Kahn, and then Reynolds-Shepherd again. In the final scene, as Burt Reynolds is holding Cybil Shepherd in his arms, he remarks that Madeleine Kahn never looked better, while Kahn and her Italian inamorato say the same about Shepherd. The two couples dance on as the music dissipates, then disappears. But since this is that rare movie in which the characters sing more than they speak, this descent into silence becomes all the more arresting. And then the movie is suddenly over. In the theater, I could sense people tensing up around me, confused.

The ending is unsettling on two counts. Reynolds' and Shepherd's wandering eyes suggest that they've been too cowardly to honestly express their love, so that anything they'll have in the future will be just as insincere as what they've had so far. But, even more disturbing, their wayward glances suggest that anxieties and regrets about one's choice in a mate is an essential aspect of every relationship. Falling in or out of love, the movie implies, automatically arouses one's curiosity about what might have been, which inevitably leads to dissatisfaction with what is. Even if they had been daring enough to declare their love, they eventually would have become equally unsatisfied with whichever alternate liaison they finally accepted. 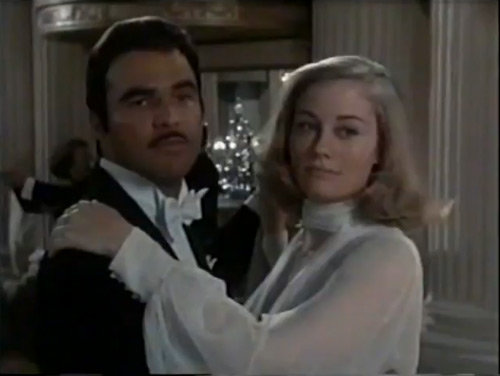 For me, then, since alienation and imperfection are the subjects of the film, they're also the guiding principles behind Bogdanovich's formal decisions. I see many of the attributes of the style that other critics describe as inept or unprofessional as Bogdanovich's commentary on the characters' incompatibility in a world defined by shallow surfaces.

Bogdanovich dresses his vast, empty sets, for instance, in an expressionistic manner meant to illustrate the emotional gulf that separates the characters. The exteriors are representations of interiors. The musicals of the 30s were shot in black and white, of course, and Bogdanovich tries to replicate their look even though he's shooting in color. In almost every scene, the protagonists are dressed mostly in white, dancing across sets draped in white, with just a few splotches of black here and there. These unrelentingly white sets create a gleeful atmosphere, but also an oppressive artificiality. The way Bogdanovich used color reminded me of the way William Wellman did in the grossly underrated Track of the Cat, in which the claustrophobia of a snowbound cabin is represented by various shades of beige and gray, punctuated now and then by one strikingly red coat. Bogdanovich's white-draped airplane-hangar sets parallel his characters' psychic enfeeblement. Rather than being a manifestation of Bogdanovich's vacuousness, I see the ubiquitous whites as a commentary on the vacuousness of the world that the characters are unfortunate enough to inhabit. 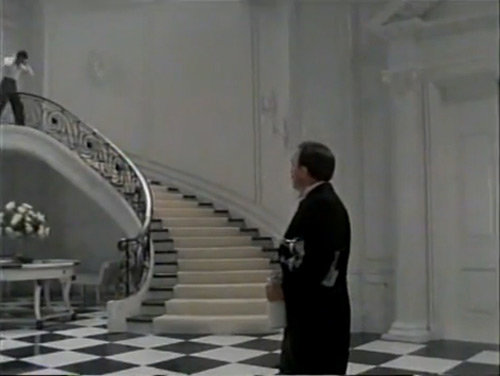 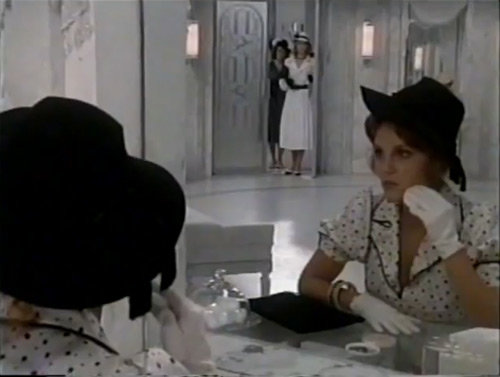 Bogdanovich's musical style also hints at the characters' unease. His use of direct sound makes the movie disquietingly unreal. He recorded the musical numbers, for instance, with his actors singing live rather than lip-synching to a previously recorded soundtrack, so we don't get the belting majesty of Liza Minnelli in Cabaret. Instead we get a sense of discontent, as if the singing and the orchestra don't belong together. Some critics complain that Burt Reynolds can't sing as well as Madeleine Kahn, but I think that the mismatched voices reveal the emotional disconnection between them. The incongruity of their voices becomes all the more important because of another willfully avant-garde decision on Bogdanovich's part: there are more words in the song lyrics than there are in the screenplay itself. Singing together defines their lives, and if that's the case, each of the couples becomes a perfect example of the truism that opposites attract but also that opposites can't possibly succeed.

The decision to record the voices live led Bogdanovich to another odd stylistic decision: it forced him to shoot in extremely long takes in which his camera follows his characters as they navigate themselves like somnambulists across the bare, sweeping interiors of the idle rich. As with a more ostentatiously modernist film like Carl Theodor Dreyer's Gertrud, these long takes emphasize how the patently empty exteriors match the characters' interiors and how the banality of time weighs down their lives. 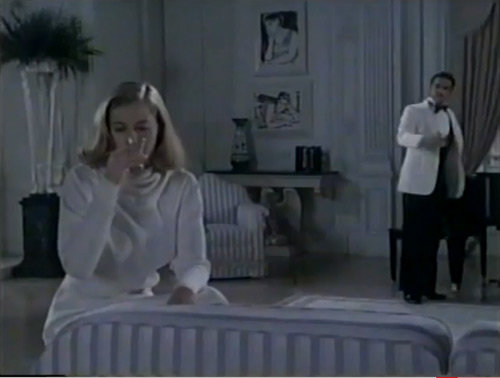 Now, whether or not you think Bogdanovich was making the same kind of commentary as Dreyer was about the fragility of human relationships has a lot to do with your assumptions about the tone of a European art film compared with a Hollywood entertainment. Gertrud's austerity—and its lack of songs in rhyming iambic pentameter—makes it easier for us to accept it as a critique of modern life. Bogdanovich's frivolity, I admit, makes my claims about the film more dubious.

Criticism often reveals more about the critic than about the film. It may be that I have detected depths that others have missed. Or it may be that in unconsciously accepting the idea that entertainment requires the characters to suffer to be considered art, I have improperly attributed ideas to a film that doesn't deserve them simply because I chuckled whenever John Hillerman opened his mouth. Then again, maybe I just have bad taste in movies.