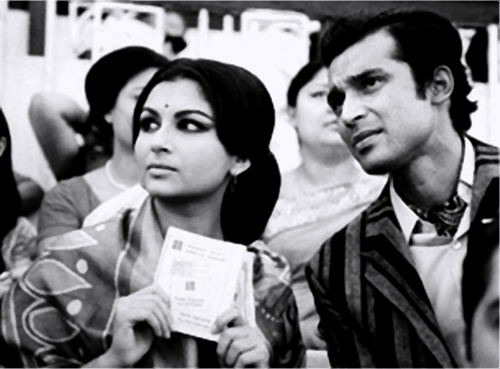 While the other two films in Satyajit Ray's Calcutta trilogy - Pratidwandi (The Adversary) and Jana Aranya (The Middleman)—show the bleak prospects of college-educated young men struggling to carve out their own futures in the charged, sociopolitical climate of early 1970s Calcutta, the middle film in the trilogy, Seemabaddha (Company Limited) poses a corollary problem: a gainfully employed professional trying to hold on to a position of privilege in the face of uncertainty. For sales manager, Shyamalendu Chatterjee (Barun Chanda), a promotion to company director in the Hindustan-Peters multinational corporation seems within grasp when a founding executive returned to England on an indeterminate leave to deal with a personal illness. Settling into a quiet, comfortable life with his beautiful, stay-at-home wife, Dolan (Parumita Chowdhury) in a company-furnished high rise apartment, Shyamalendu is eager to impress his visiting sister-in-law, Tutul (Sharmila Tagore) with the trappings of his success, introducing her to a rarefied world of country clubs (which, only ten years earlier, catered exclusively to foreigners), horse racing, and cocktail parties. Having already distanced himself from his old-fashioned parents by arranging separate accommodations for them in another part of Calcutta (presumably, to comply with company regulations against housing non-immediate family), Shyamalendu has already shown his willingness to put the interests of the company before his own—a willingness that is tested when an international contract that he had negotiated is jeopardized by the late discovery of a factory defect on products that that had been set for immediate shipment.

As in Kapurush, Ray examines the nature of privilege through the prism of colonial legacy, where social mobility is tied to an ingrained pursuit of imperialist ideals and rejection of cultural identity (in an early encounter, a factory foreman comments on Shyamalendu's towering stature over him in an office elevator, implicitly equating western physical attributes with his potential for success in the company). Ray also reflects this systematic erasure in the dissolution traditional family (a theme that also runs through Pather Panchali, albeit from the other side of the economic ladder), symbolized by the Chatterjees' separation from their only child, Raja, who was sent away to a Darjeeling boarding school, as well as their parents—and by extension, their ancestral roots in Patna—the elder Chatterjees having been uprooted from their home only to be kept at a distance by the status-conscious Chatterjees. Framed against the shot of Shyamalendu arduously climbing several flights of stairs to his apartment after the elevator is shut down for repair, Ray creates a pungent metaphor for the false equation of advancement and social progress, cultural assimilation and amnesia.