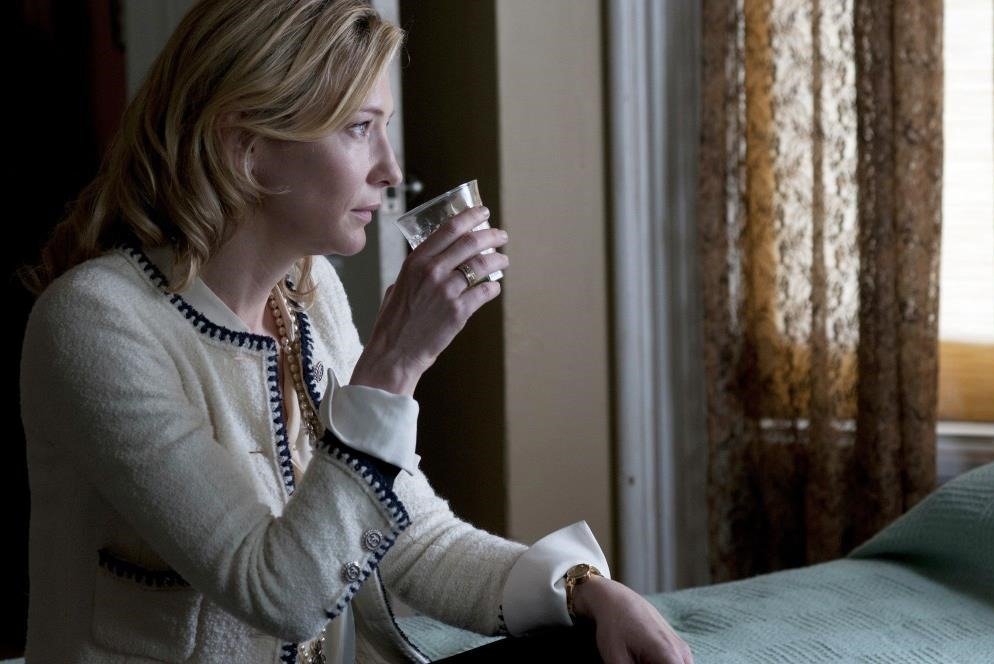 Woody Allen has never been much of a storyteller—often to the benefit of his material. The films of his that attract the most enthusiasm hinge upon moral dilemmas that simplify narrative into rich, familiar morsels. (Examples of these quandaries include: “Is the romantic attention of a flirty, neurotic copywriter worth the sacrifice of a precocious, sexually experimental schoolgirl?” and, more canonically, “Is a world in which very good things happen to very bad people worth living in?”) Other memorable entries in the Allen canon (Sleeper, Hannah and Her Sisters) are meanwhile loose collections of sketches whose pungency and social verisimilitude distract us from their (very forgivable) lack of cohesion. Allen, perhaps due his background in observational comedy, generates indelible human detail with aplomb, but his plots are often purely functional—receptacles that gather up the jokes and ethical musings into a recognizable if generic shape.

The titular character of Blue Jasmine (Cate Blanchett) reminds me of Allen in a way none of his other protagonists have: She, too, tells lousy stories. Allen’s depicted the frustrations of blocked authors and filmmakers before—this is in one sense all that he depicts. But none has been so pathologically inclined toward narrative clumsiness as Jasmine, who’s further unfettered by the artistic aspirations that complicate these earlier characters’ lack of talent.

Jasmine suffers acute denial through much of the film, first toward the schemes of her philandering and rapacious Wall Street titan-spouse Hal (Alex Baldwin), and then toward her own culpability in his downfall. The tales with which she regales friends, family, and herself through this ordeal always sound promising: After her less affluent but more emotionally intelligent sister, Ginger (Sally Hawkins) wins the lottery, Jasmine convinces her and her husband to participate in one of Hal’s bogus ventures, assuring them that low risk and high yield await them at the climax of their investment. Yet Jasmine’s stories remain, as even the most affecting of Allen’s output do, cracked with inconsistencies and implausible turns. At one crucial juncture, Jasmine deceives a wealthy, eligible suitor (Peter Sarsgaard) with a pristine but heavily doctored backstory—she claims she’s had a sparkling career in interior design, and a husband killed by the stress of performing surgery. These are easily—pathetically—verifiable facts, kept clandestine only by the anachronistic Luddism Allen insists upon. (Though the bulk of the action occurs in San Francisco, the city has been gutted of virtually all its tech-fetishism.)

We learn that Jasmine, like her pluckier sister, was adopted; even the story of her origins contains false starts and structural blemishes. But﻿ no story is more difficult for Jasmine to tell than the one that comprises her future. As the film opens, Jasmine arrives at Ginger’s humble home in the Mission District, in dire need of a safe house in which to convalesce. Substance abuse and a nervous breakdown have exacerbated Jasmine’s disconnect with reality to the extent that she can barely defend her decision to fly coast-to-coast first class despite her crippling debt. Attempting to rebuild and renew herself, Jasmine stoops to transparent and at times bafflingly circuitous fabulism. (As part of a plan to study decorating, a discipline for which her prior experience with finery has ostensibly primed her, Jasmine takes an evening class in computer skills—how else is she supposed to get an online degree?) Simultaneously, Jasmine re-lives the most sensual and traumatic events of her recent past—or so we can assume from frequent and paratactically interwoven flashbacks.

With these chronological leaps, Allen drills us deeper into Jasmine’s mind, withdrawing only for anemic sidebars featuring Ginger’s previous and current schlub-beaus (Andrew Dice Clay, Bobby Cannavale, Louis C.K.). And Jasmine’s mind is a jagged and glinty place, filled with gold-plated sinks and marble tubs; with strings and horns sonorously bleating “Blue Moon”; with fiscal subterfuge and social humiliation; with designer clothes and swimming pools as cool and lucid as precious stones; with city streets so empty they appear naked. These details, shot with a curiously soulless vibrancy by cinematographer Javier Aguirresarobe, are overwhelming enough from Jasmine’s perspective that they do not form an instructive pattern. She rants and raves and trembles in their thrall. She exhibits no control over her own story, and fails to learn anything from its punishment. Allen often cuts from biting flashbacks to awkward close-ups of Jasmine in the present, mumbling angrily to herself in mixed company.

Jasmine’s tendency to narrate her experience ad nauseum is a quality shared by other Allen characters; compulsory diegesis is an irritating weakness of his recent work. (Think of Marion Cotillard’s flapper girl in Midnight in Paris, retching up the film’s theme with her expressed desire to live in her own romanticized past, La Belle Époque.) Here, however, the tic is necessary, and fused with Blue Jasmine’s throbbing histrionic pulse. To make the stories she tells more believable to herself, Jasmine spitfires exposition recklessly, perfervidly, and arrhythmically, as though trying to dismantle the nearly Sophoclean arc she’s charted from success to disgrace. This frenzied externalization of caustic memory becomes one of her most hazardous coping mechanisms (plentiful Xanax pills and Stoli martinis with a lemon twist are others), a device she uses to keep from confronting what about the past she cannot change.

This self-centered loquaciousness is also the source of an ironic tension that feels quite new for Allen. While babysitting Ginger’s two boisterous sons, Jasmine wryly describes being administered electroshock therapy. (“Edison’s medicine,” she croaks out of one side of her liquor-moistened mouth.) Framed in vaguely boozy, downward-slung reverse shots, the boys lean in humorously towards their tipsy guardian—captivated, as we are, toward the force of her performance rather than the meaning(-lessness) of her words.

This dramatic irony—our awareness of Jasmine’s stage-y lack of self-awareness—courses through the film in other, deeper ways that universalize Jasmine’s plight. We may not recognize much of ourselves in Blanchett’s symptom-heavy acting, but we can identify with the manner in which Jasmine has chosen to yield and subordinate the story of her life to ignoble leading men, often without realizing she’s done so. Insofar as the movie is a response to the Bernie Madoff scandal, through which Allen himself lost considerable investments, the director wisely resists the urge to explicate or humanize the nefarious broker’s actions, instead fixing a slanted focus on how Madoff’s behavior might have been influenced by a pampered domestic partner.

This illustrates how those who enable miscreants can make more interesting protagonists than miscreants themselves.These tangential characters alone are both victims and accomplices, and their complicity is often more puzzlingly conscious than the unfathomable perversity of ringleaders. Hal, for instance, is rendered as little more than an unconscious slave to a dark impulse that is taken entirely for granted—his narrative is as primordial as it is illogical, and seems to involve very little volition or intention. Watch, for instance, the way Hal sidles, or rather slithers, up to a buxom trainer in front of his wife. There’s no evidence of conflict between Hal and Jasmine that would compel this behavior; it’s merely an outcropping of Hal’s twitching, lecherous instincts. Watch, too, the way Allen offers a somewhat too-diametric foil in the form of Ginger’s muscled mechanic-finacé Chili (Cannavale), who after brutishly tearing a phone from its socket out of lovesickness is reduced to a slobbering mess of tears in a produce aisle. Why does Chili’s affection for Ginger boil to such feverishness? We’re privy to precious little of their relationship. Chili merely seems hardwired for hard-nosed devotion, like Hal is for perfidy.

Jasmine becomes a poor storyteller because she internalizes—and thereby abets—the cheap narrative byproducts of her husband’s avarice (which, despite its focus on wealth, is here a rather cheap attribute). More than money and dignity, the shallowness of Hal’s evil cheats Jasmine and others out of control over the story of their lives, a point crystallized in the symmetry between the film’s prologue and its epilogue. These graceful, garrulous bookends depict the sweep of Allen’s anti-heroine from prickly comedy into tragic devastation; in both, Jasmine babbles on and on about her woes, presenting an incomprehensible narrative to an unsympathetic bystander. Jasmine’s slurred, quivering speech in both scenes is practically an involuntarily-spat idioglossia of shame and regret.

This contrition is compounded elegantly, and grief-provokingly, by a confrontation late in the movie between Jasmine and her stepson, Danny (Alden Ehrenreich). Danny, who disowns his father under a cloud of ignominy, is little more than a footnote in Jasmine’s tome of ugliness and pettiness. But he’s perhaps the most complex male figure in the entire film due to the aggression of his choices, and the responsibility he takes for them—he alone seems made of flesh rather than desire. After a long estrangement, Jasmine discovers the once Harvard-matriculated scion as a lowly luthier, toiling amid the dust and steel of Gary Brawer’s guitar shop. (He is adjusting the truss rod, as it were, of his own story.) Danny coldly rebuffs Jasmine’s maternal advance and she silently weeps—possibly because he does not reciprocate her desperate warmth, but also, possibly, because of the liberation he represents, a liberation she cannot negotiate for herself. Her story has been written for her; try as she might to reduce it to nonsensical syllables burbled over and over again, she cannot revise it.