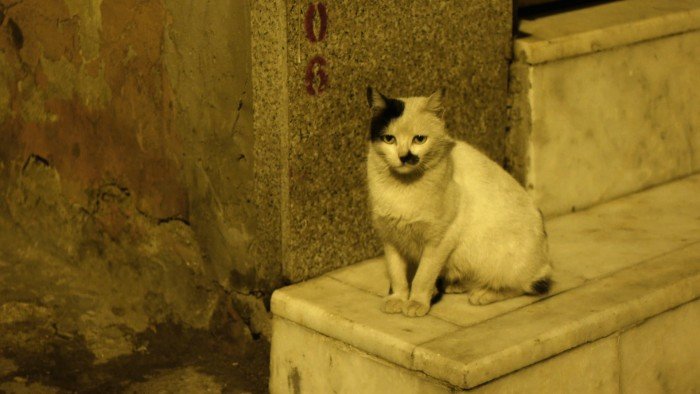 You describe the Maddin and Panahi well, and we have similar takes on them—but please allow me to digress before I address those films, as I’ve just come out of Jem Cohen’s Counting, and I’d like to take advantage of its freshness in my mind. Organized into 15 chapters, the film more or less documents certain excerpts from the filmmaker’s travels over the past three years. The chapters vary in length and focus, with different headings & descriptions (“New York City, 2012-2014,” “The Millions,” etc.), and taking place in different locations across the globe (Moscow, Porto, Istanbul). Entirely made up of subjective glimpses of these places, the film resembles a diary or travelogue—but in spite of its seeming slightness in its minute pieces, in total it is a perceptive and honest record of the world today. Cohen understands the limitations of the image, of the impossibility of fully articulating a place, and instead uses abstracted observations to create a point of view. In this way, it is not so dissimilar from these correspondences, or the impressions we’ve written at festivals: rather than present authoritative accounts, acknowledge our subjectivity.

The first chapter of the film includes a brief voiceover taken from some radio show or podcast, where someone speaks about how we are making scientific progress that will soon allow us to understand the universe better. Meanwhile, Cohen directs his lens at neglected and impoverished pockets of New York, boarded up properties, signs of gentrification, a torn out page from a magazine with the headline “The World’s Last Mysteries”, and protests. His eye isn’t directed in a gaze at the stars but at the concrete under our feet, not the secrets of the universe but the cracks in the pavement, peaking into decrepit spaces, be they in the United States or Russia, and finding in them evidence of contemporary human struggles, both political and existential. I described the film as an account of Cohen’s travels, but something like half of the film takes place in New York, where he lives—and yet the scenes in New York are also travels of a different nature. Cohen travels New York the way one explores consciousness, navigating into new metaphysical territory as much as discovering literal places. Paced with a sense of transience (the shots are not long, sometimes as fleeting as a couple seconds, but never dwelling for too much time), Counting doesn’t so much situate us in the present of Cohen’s filming, but sits us beside him now, gazing into memory, thoughts and feelings of the present-past before us, making the film’s closing Chris Marker quote the perfect last note: “…In this layman’s double for prayer that we call memory”.

﻿Now I too must travel into my memory, not so far back mind you, less than 48 hours, but still, that’s already seven films ago. Making this challenge all the more formidable, though, is that I’m trying to reenter Guy Maddin’s The Forbidden Room, a dreamlike memory even as it unfolds in front of us, a phantasmagorical trip through what would appear to be cinema’s own unconscious, half-remembered dreams of celluloid itself. Maddin meant more to me when I was a newfound cinephile, and his reverence for film history, which pulsates through every frame of his movies, easily triggered my own romanticism of the medium. But after a while I grew weary of his style, which made for interesting cinema but not necessarily good movies, if that makes any sense at all. Limited in their ontology, Maddin’s films are more like exercises or supplements to the art form. Occasionally, the personal nature of his work transcends their mimicry such as in the autobiographical My Winnipeg—and who cannot surrender to the impassioned energy of The Heart of the World!? Here though may be one of his finest efforts, co-directed with Evan Johnson, The Forbidden Room moves so swiftly from one idea to the next (most of which are, if not hilarious, highly amusing), and with such urgency and skill. Liquid, boiling images of film material create beautifully distorted impressions of the fragments of this fragile medium. The Forbidden Room is a psychosexual plunge into a hidden space, wherever it is that Maddin’s mind and movies meet, secret desires made manifest as spectral figures and images.

As for Taxi, I share your feelings but possibly hold it in higher esteem. This is a great film, one that, with minimal means, creates a sophisticated formal system that Panahi flourishes in and in such a way that for me surpasses Closed Curtain (though doesn’t touch This is Not a Film). It gets bonus points for being such a lively and lovely picture—one that’s excited to pay attention to every character who enters its frame. The dashboard camera setup makes for a simple and exquisite approach, the swivelling device capturing most of the film’s images. Just as lovely, however, are the formal digressions brought on by Panahi’s niece, who pulls out a camera of her own that the film then intermittently cuts to, reiterating the artistic and technological democracy that This is Not a Film first articulated: anything is cinema and anyone can make it using whatever they wish. If there is a reservation I hold, it’s that the film depends on meta text to be fully understood and appreciated. While I’m certain anyone can enjoy this film, knowing Panahi’s situation (not exposited in the film) is key to its meaning. I at first questioned Panahi’s presence in Closed Curtain, and wondered if there was something self-pitying or navel-gazing about it, but I now realize that Panahi is brilliantly using himself as a symbol and metaphor, and exploits that for expressive and creative means. And if that means we can look forward to another surprising low-key effort featuring the man himself, it pleases me very much, if only for the enjoyment of Panahi’s on-screen presence that makes the warmth that underlies his films all the more palpable.

We're a few days into this festival, Danny, and there's already so much to talk about. I'll leave it to you to describe the regrettable new film by Werner Herzog. It's almost too painful for me to do so as he was the filmmaker that sparked my transition from "movie lover" to "cinephile", and I'm rarely let down by his work. However, such disappointments are balanced out by unexpected pleasures, like the beautiful and heartbreaking 45 Years by Andrew Haigh, and the altogether excellent Queen of Earth by Alex Ross Perry, which I hope we can discuss in the coming entries. Then there are reinvigorating delights such as last night when you and I saw The Wizard of Oz together on an immaculate dye-transfer print—and with an audience mostly made up of Germans who had never seen the film! We both hadn't seen it since we were children, and didn't quite know what to expect. Weirdly, our motivation to see it was sparked by Louis C.K.'s Ray Bolger impression from his latest comedy special. It turned out that the scene C.K. riffed on was nothing like his exaggerated performance. Oh well, the C.K. bit still cracks us up, and seeing the vibrant Technicolor film woke my tired eyes and perhaps has primed me for other stylistically extreme visions, like that of Terrence Malick's Knight of Cups. Speaking of which, I should go grab my seat.