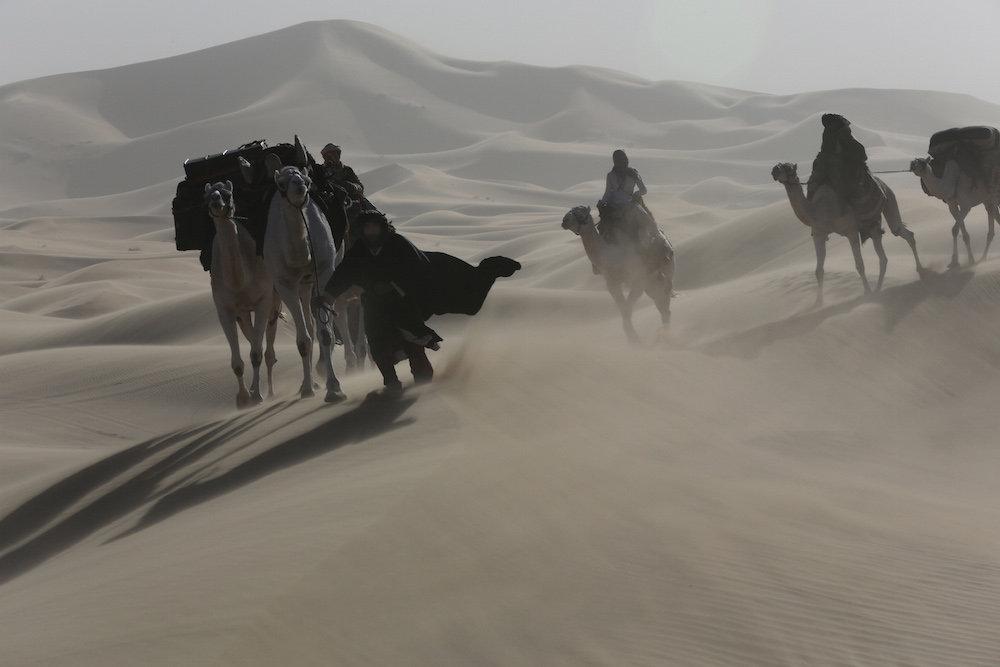 What does it say that we've both put off discussing the new Werner Herzog film? ﻿ I must admit my profound disappointment at Herzog's first fictional feature film since his two-shot salvo of The Bad Lieutenant: Port of Call New Orleans and My Son, My Son, What Have You Done? in 2009 and certainly his most expansive drama for decades. With a cast of James Franco, Robert Pattison, and Damian Lewis led by Nicole Kidman, Queen of the Desert adapts the true saga of Gertrude Bell, an utterly unique woman who at the turn of the last century plunged into the deserts of the Middle East by herself and become better acquainted and more influential among its myriad tribes and factions than anyone else before and probably since.

Yet for a director so adept at discovering, eliciting and pursuing a kind of inspired mania and adventurousness in his fellow man, coming across his first female heroine Herzog stumbles. Or perhaps coming across Nicole Kidman, a force of will in the film similar to that of Isabelle Huppert's presence in Claire Denis's White Material: a female actress whose persona and process is so strong that it actively fights the efforts of the director. While White Material ultimately feels like a compromise between actress and directress, in Queen of the Desert Kidman wins: it is she who sets the tone of dignified perseverance in her character and in the film's story.

Around her are an episodic assembly of men. There are those that love her, including the first and never matched love (played by Franco) of this highly educated and direct woman who was stifled in English domesticity; and then there are all those Englishmen who follow him. There are, too, all the Arab men to whom she rides up on a camel vibrantly pretty and politely impetuous, and they let her in as well. And where Kidman-Bell moves from place to place Herzog is obliged to follow, eliciting an erratic series of performances from those she confronts. The director is never able to either keep the rest of the film's sprawl on the same even keel as the actress, nor to push her in fervor to match the oddness of Franco's impish grin being a foundation of his Englishman's poetic love for Bell, or the similar stunt casting of Pattison as T.E. Lawrence. The strangeness of these appearances—immediately eliciting laughter in the giant Berlinale press screening—suggest something of a canny destabilization by Herzog of a potentially sleek prestige film. It's not that the movie needs to be crazy and Kidman is not crazy; it's that the film struggles within itself and is unable to determine what to do, where it commit its tone, focus, and images. Even this might imply an inspired erratic or eccentric quality Queen of the Desert does not have, despite, for example,  a handful of truly strange visions of the desert discovered through crane movements and cameras on drones. Yet placed next to the bougie period-cinema-by-the-numbers of the Benoît Jacquot competition film Diary of a Chambermaid, even these little wrinkles and visions seem like cool water to a thirsty traveler.

In the cast, only Damian Lewis seems to understand the film Kidman is in, a restrained period piece of muffled English passion, and meets her there.  There's a grand romantic idea at the film's core beyond even the biographic amazingness of the story: a flirtation with the desert that is pushed, through the failure of poetic love, to become a unnamable vocation, an obsession with leaving English civilization behind in abstract search to fill a wounded, empty heart. Which may be why the film is less about Bell's adventures, what she does, than it is a series of meetings between her and men. These men are as much of Bell's journey in the film as her actual perilous paths taken in the desert, and yet none, including her supposedly marvelous relationship with the various Arab sheiks, carry in them the excitement of discovery that these themes of poetic love, poetic geography, poetic adventure suggest. A telling anecdote: when Kidman-Bell is handed a goat head to eat by a sheik, she holds it in her hand but we never see her bite in, the kind of commitment normally found in a Herzog movie. The opening images are of a windstorm over a desert, and the camera trembles from the barren force; yet the film is entirely missing the danger and the mystery suggested by this energy pulsing outside the frame. 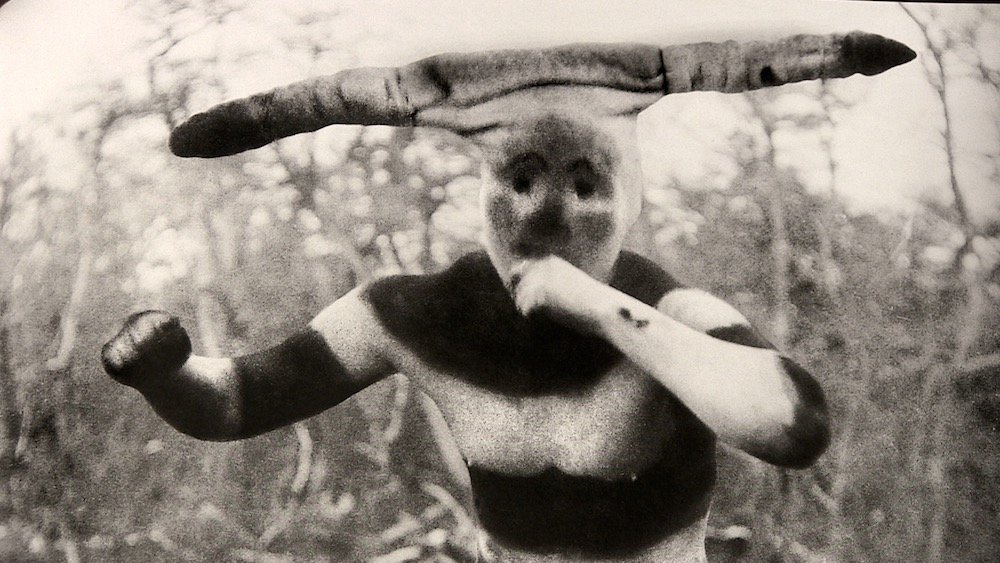 In contrast, Chilean documentary filmmaker Patricio Guzmán﻿'s moving The Pearl Button is a Competition entry of small size but vast scale of concept and compassion. Like his last feature, Nostalgia for the Light, Guzmán﻿ draws analogies between natural phenomena—here, the relationship Chile, with its sprawling Pacific coast, has (or does not have) with water—and the deep history of violence and oppression in his native country. In bright, lucid observations, Guzmán﻿ discusses the mostly unknown history of the indigenous water people of the Patagonian archipelagos that are in Chile's south, their origin and ties to the water (having indeed arrived by water to what would become Chile tens of thousands of years ago), eventual discovery by expanding Western forces in the 19th century, their subsequent oppression, forced integration, and eventual dwindling of their practices, culture and language.

With a camera that roves the waterways and glaciers of the south, Guzmán﻿ speaks to a few of the tribes' survivors, to historians and a poet, about this missing history which can be found in the memory of Chile's water. The Pearl Button then ties the "historical" disappearance of these peoples to the modern "disappearances" of Chileans under the late 20th century dictatorship. It is an idea which ties in many ways but specifically to the fact that the main island used to gather and assimilate the water people was later used as a concentration camp for the Pinochet dictatorship, and that over a thousand bodies of murdered Chilean prisoners were dumped in the ocean to hide their crimes. Again, the memory of the water: the title of the film comes from the person of Jemmy Button, an islander brought to England for a year to be civilized (he was convinced to go with the payment of the button, thus his name) and returned to his people a different person; and also from a single button that was found in the ocean grave of a modern murder victim, a button that stands for but also is evidence of the crimes of so-called civilization.

It is a clear-eyed work of exposé﻿, analysis and poetry, with little pretense and instead a touching evocation of scale, the scale of time and history, culture and crimes, and nature's relation to it all. Water is the perfect analogy for this, with its simultaneous micro and macroscopic existence. The Pearl Button in its gentle confidence and simple arguments may often resemble the aesthetics of television documentaries, but the knowledge, beauty and force of its words and images struck me strongly. I shivered twice during the film: once when a group of imprisoned inmates from the Pinochet era are gathered together for a group shot and yell out their prison sentences; the other, an old woman of a water tribe who tells in her nearly dead language the tale of her 1,000 kilometer canoe trip as a young girl around Tierra del Fuego. She says that it took so long that, starting as a young girl, she paddled and became a teen, paddled and became an adult, paddled "and here I am": in front of Guzmán﻿﻿'s camera, speaking her language, and telling of the water.

As a side note, this use of indigenous language was the best thing about the Guatemalan competition film, Ixcanul Volcano, whose primarily spoken language is a local dialect, Kaqchikel, I had never heard, and in fact sounded to my ears almost like Arabic. It's not unusual to encounter something you haven't seen in the movies, but to hear something unique was a remarkably fresh experience and carried me through an otherwise average film.

Have there been small things like this that have held you or stayed with you for movies you didn't much care for at the Berlinale, Adam? I for example found the 1958 film by prolific Japanese director Kon Ichikawa, Conflagration, despite (or because) of its source in a Yukio Mishima novel, bone dry—but my goodness, how Ichikawa and cinematographer Kazuo Miyagawa (Mizoguchi's main man) knew how to frame black and white widescreen images, each a pristine delineation and gradation of blacks, whites and grays, with sharp and inspired lines of geometry, graphic play and depth. I know you've seen more than you have written on enthusiastically; tell me something about them!﻿﻿