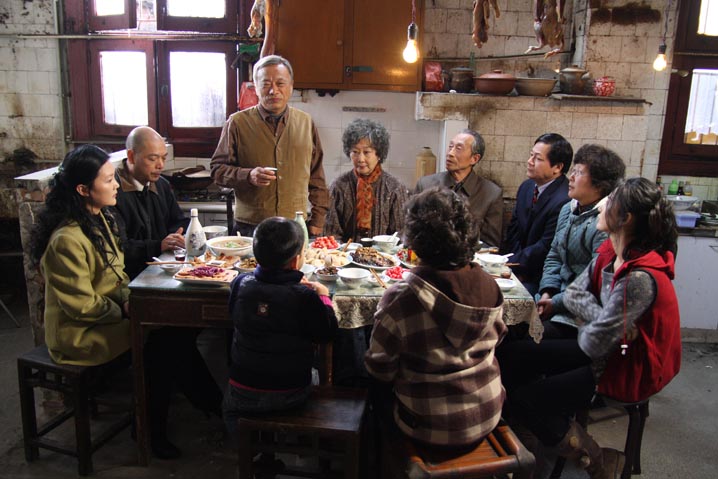 Traditionally, films that open festivals have a certain event quality about them - a few stars to sprinkle the red carpet with (Martin Scorsese and the Rolling Stones, say, for Shine a Light in 2008) or a pitch for the home team (Tom Tykwer's The International last year) - but far too often they turn out to be all too easily forgotten once the festival truly begins in earnest. Celebrating its 60th edition, the Berlin International Film Festival has turned that tradition on its head.

If director Wang Quanan is known outside of China at all, it's most likely for Tuya's Marriage, which won the Golden Bear here in 2006 and was indeed one of the better entries in the sudden wavelet of yurt movies a couple of years back. The biggest name in his new feature, Tuan Yuan (Apart Together), is Lisa Lu. Granted, the 83-year-old actress has had a stellar career, appearing in, among dozens of other films, Bertolucci's The Last Emperor and Ang Lee's Lust, Caution, but as a paparazzi magnet, she's not exactly Mick Jagger. Most importantly, though, Apart Together breaks the curse of the opening night film with virtues so simple yet powerful it will surely be remembered long after tonight.

The exposition is swift. A family is gathered to hear a letter read out loud from Liu Yangsheng (Ling Feng), one of thousands of Nationalist soldiers who fled the communists and the Chinese mainland for Taiwan on February 10, 1949, leaving behind Qiao Yu-e (Lu), the matriarch of this family, already pregnant at the time. Now, Liu Yangsheng is returning to Shanghai for the first time in decades, presenting a separate and individual dilemma for each member of the family - not the least of which, of course, is Qiao Yu-e's current common law husband (Xu Caigen). The emotional turmoil within each character is palpable but barely legible, broiling as it does beneath a complex protocol of a profoundly polite society. As such, there are more than a few echoes of Ozu in Apart Together, particularly in the ways things go unsaid but understood between generations, but also in the primacy of the dinner table as the designated meeting ground for conflict and negotiation, and in Wang's confident placement of his nearly static camera (quite a contrast to the freely mobile camerawork in Tuya's Marriage, though that film, too, centered on a woman faced with choosing between the men who love her).

When Wang does decide to shift his camera within a shot - moving slightly towards the former lovers as they realize their passions still blaze, for example, and then over to Qiao Yu-e's granddaughter as she listens to a conversation that may drastically alter the fate of half a dozen family members - it becomes, as an exception to the rule, all the more effective. But there's also a shot towards the end of the film (and to describe it would be to spoil it) that, to my mind, is a nod to Jia Zhangke.

Style aside, Apart Together also fascinates as a macrocosmic portrait of contemporary China. Liu Yangsheng's stay in Shanghai is periodically punctuated with sightseeing trips and, in one in particular, a tour guide rattles off stats that would make any Chamber of Commerce proud, emphasizing especially that the nation's current boom began right here. Qiao Yu-e, though, is not bullish on developers encouraging the city's inhabitants to leave their old neighborhoods for the swanky new high-rises, even if they are compensated once those neighborhoods are swept away to make room for yet more high-rises. Yes, the war cruelly split families 60 years ago, but as Apart Together eventually illustrates quite plainly, greater families are being split into smaller, lonelier units by more subtle forces today.

"Small in scope but tightly structured, gracefully acted and directed, [Apart Together] opens up deep historical wounds and generational traumas created by China's civil war," writes Maggie Lee in the Hollywood Reporter, "but does not press on them, exploring instead more universal human dilemmas lightened by scrumptious culinary episodes."

Film-Zeit is gathering reviews in German; they haven't caught up with Thomas Groh's at Perlentaucher yet, though.

Update, 2/12: "The principals' combined age is an impressive 230 years," notes Dan Fainaru in Screen. "Lisa Lu, 82, is a legend of the glory days of Shanghai's cinema. Here she plays a woman who expects, after a lifetime devoted to her family, to be granted the last years of her life to live as she pleases. 72-year-old Ling Feng gets a chance to display his singing gifts towards the end, but Xu Caigen, 76, turns in a boisterous performance, stealing scenes from both of them."