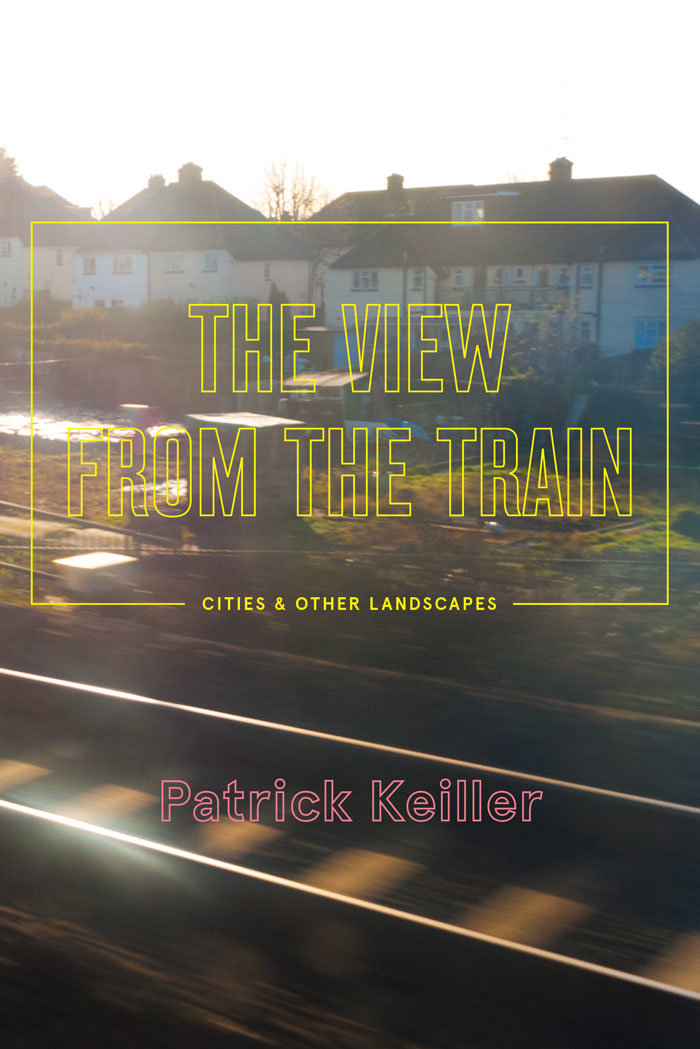 For those readers of The View From the Train , the new book of writings by Patrick Keiller, already familiar with the author’s films, it will come as little surprise to discover many of the essays herein are playfully dense. As evinced by Keiller’s Robinson Trilogy (1994-2010), the British architect, writer and filmmaker is something of a specialist when it comes to the digestible and often amusing presentation and juxtaposition of historical facts, industrial statistics, literary references and all those other curious nuggets that comprise a cultural landscape.

As Keiller noted in typically throwaway—if far from insincere—fashion during a talk at London’s Tate Britain in May 2012, “everything is connected.” And although how one thing relates to another is not always immediately evident, Britain’s most consistently cogent film-essayist subscribes to the notion that the way in which we merely look at things can and often does inform how we might transform them. Indeed, since material space—that in which people live—is contestable in both physical and social terms, how we conceptualise it has political ramifications.

To explore, for instance, why the UK can have one of the most advanced capitalist economies in Europe at the same time as it has some of its most dilapidated housing (as Keiller does in his 1998 essay ‘The Dilapidated Dwelling’ as well as his 2000 TV film of the same name) is to suppose an interrelation between architecture and economy. More specifically, it is to suppose that one might be a direct result of the other. The important implication here is that framing space as the outcome of forces that are far from natural—that are indeed manufactured—means that a political predicament is never irredeemable. We reclaim space by reclaiming our economy.

The View From the Train’s subtitle is Cities & Other Landscapes. The other landscapes are architectural, industrial and filmic. The development of film, Keiller recurrently argues, has changed the way we think of space, and his own development as a filmmaker has led to his concept of ‘Film as Spatial Critique’ (one essay title here): the cinematic image as a means of investigation and research in and of itself. The thirteen essays compiled here have all been previously published elsewhere, and date between 1982 and 2010. The essays are assembled chronologically; as Keiller notes in his brief introduction, no attempt to amend the repeated frames of reference from one essay to the next has been made. The result is something similar to the modus operandi of Keiller’s fictional researcher Robinson: a linear progression on the one hand, and a circumnavigation on the other—or a forging ahead with one line of enquiry while falling back upon the same sources of inspiration.

Indeed, as demonstrated by The Robinson Institute last year—an exhibition that expanded upon themes and images first addressed in his 2010 film Robinson in Ruins—it might be more profitable to approach Keiller’s body of work as a necessarily incomplete multimedia and interdisciplinary project, to which The View From the Train is now only the latest addition. Tellingly, those inclined to analyse an artist by proceeding chronologically through his or her work will find less fruit here than those more interested in the changing landscape(s) of London—and, to a lesser extent, of the UK—over the past three decades.

Though some may object that the previous availability of these essays renders such an addition redundant, their assemblage in one digestible volume is welcome—especially when many were originally written for specialist publications. This idea, of not particularly saying anything new but of instead trying to find ways of renewing or rephrasing an old argument, was precisely one of the aims of Keiller’s feature debut London (1994), which reconceptualised the touristy space of Britain’s capital as one marked by ghostly absences—absences both actual (London’s industrial activity) and perceived (the fact that “London isn’t Paris”).

Keiller is as infectiously detailed a writer as he is a cinematographer. His 2001 essay ‘Port Statistics’ initially overwhelms with its onslaught of then-recent statistics relating to the UK’s apparently declining port activity, but its deadpan navigation of such dense figures begins to resemble something poetic. The way Keiller upends what might have otherwise been a confirmation bias concerning Britain’s failed capitalism—on the contrary, urban decay is just one visual outcome of the country’s industrial success—is exhilarating. True to the Surrealist tradition with which Keiller has repeatedly associated himself—and true also to what he sees as the cinema’s chief potential—the essay frames otherwise banal facts in such a way that their presentation becomes revelatory, or indeed marvellous.

As with the Robinson films, there is a sense of mischief at work in Keiller’s writing. Though his grasp of the concepts and histories he deals with is evident, so too is his fondness for a more teasing and elusive mode of address. The 2003 essay ‘London – Rochester – London’ is barely an essay at all in the conventional, argumentative sense, instead taking the form of a humorous digression as its author relates in diaristic fashion an itinerary he undertook with a friend. Going for walks, in fact, is a key element of Keiller’s research, since flânerie offers a necessarily different, and an inherently investigative, perspective of material space. Indeed, though this collection of essays is called The View From the Train, Keiller reveals that at least two of his essays evolved out of attempts to actively find a landscape he wished to film that he had first seen from a moving train.

Actively navigating one’s way to or across a specific landscape, then, encourages an engagement with architecture that, for instance, a less responsive or active mode of research, such as browsing the Internet, seems in some way to prohibit. One clear benefit here is that the historical connection between two buildings that share the same geographical space may not be known, for instance, and there’s a sense in some of Keiller’s writing that by conceptualising the two so as to juxtapose them, something deeper and more contradictory will be revealed—contradictions that remain invisible on a postcard image precisely because the image is received and the landscape therein is subsequently harmonious.

If there is one argument that runs consistently through the essays here, then, it’s that a cinematic conceptualisation of space can and does contribute to our transformation of it. Though, as Henri Lefebvre wrote in The Production of Space (and as quoted more than once by Keiller):

"The idea of a new life is at once realistic and illusory – and hence neither true nor false. What is true is that the preconditions for a different life have already been created, and that that other life is thus on the cards. What is false is the assumption that being on the cards and being imminent are the same thing, that what is immediately possible is necessarily world away from what is only a distant possibility, or even an impossibility. The fact is that the space which contains the realized preconditions of another life is the same one as prohibits what those preconditions make possible."

The real work begins, then, in forming a bridge between the conceivable and the actualised. And that bridge might require something beyond the cinematic.

‘The View From the Train: Cities & Other Landscapes’ is available now from Verso Books.