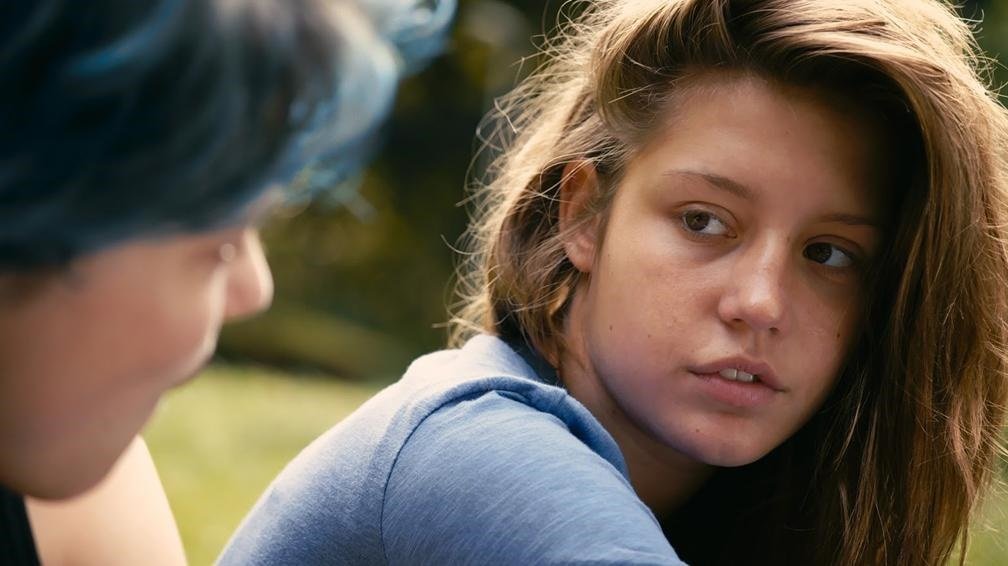 In Blue is the Warmest Color the camera cleaves to actress Adèle Exarchopoulos, who plays the young main character Adèle. Yet, such intimate photography can border on filmic torture, similar to that employed by cinema's most grand incubus, Lars von Trier. Most of the film is a reality show of Adèle’s day to day existence where she has trained herself to hold the recorder by her face without glancing at the lens. She goes to school, she eats, she reads, she kisses other people, she cries, she sleeps, she dreams. Maybe it’s emblematic of the current generation of device-addicts, as most spaces in the film’s world disappear in favor of the star's image, including the school she goes to, the one she later teaches at, and the hallways of her house. Like pictures people take of themselves by phone or laptop, the terrain we live in isn’t placed—but how important is it beyond blurred background to the subject, the self, the picture taker? ﻿If the director, Abdellatif Kechiche (the man manipulating the spaces) showed the proximity of her room to that of her unsuspecting parents, it might explain why her loud sex with her new girlfriend (Léa Seydoux’s Emma) wouldn’t elicit a denouncement when they lie about the nature of their relationship. There is one large tree fat with many years of life featured prominently in the film. It’s where the women fall in love, it’s where Adèle goes for solace after their relationship has ended. One tree stands in for the eons of life on the planet, and its appearance as the anchor of one shot is such a jolt that the counterweight of all the interiors before and after throws off one’s perceptions.

If the audience can see anything in the film, it is the emotional schisms in Adèle﻿'s plump, unadorned face. They are the most moving element of the film, and situated so close to the separation of her front teeth, I feel I know the quality of her enamel better than some women who let me stare at them. Similar present day cinematography is employed by the Belgian Dardenne brothers, where in many features (most notably Rosetta) the hand-held isolation on the main character is claustrophobic in a more profound way. The background can bend and blur, but it doesn’t work against the character, it ennobles it—as when what happens off-screen gets heightened by closing in on the actress’s face to tell the story. When Adèle falls in love with Emma, the strategy of shot/reverse-shot starts to dominate, and aside from their initial meetings, their faces rarely share the same frame. This separation alters the whole structure of the film's visual map and mutes the first hour’s passion.

The film resembles the mess of the protagonist’s desires as Adèle ﻿again and again seeks someone to connect to and kiss, even after she’s fallen in love. A dramatic bridge is missing and suddenly Adèle and Emma are living together and having trouble. Time doesn't pass, there are no fades to black, and suddenly the parents of both and the schoolmates of Adèle, secondary characters that partly helped define the main ones, are dropped without explanation after an hour and a half. There’s enough buildup to believe why the couple would get together—they each respond to art (though the camera’s looming about the asses of the sculptures they look at seems too obvious) and are a good fit sexually—but the script (based on a graphic novel) breaks down emotional motivations into their most hackneyed clichés. When Adèle tells embittered Emma that she slept with a man because she felt alone, the evidence that this is true, a long birthday party scene in which Adèle talks to a new man about his job as a Hollywood extra and looks at Emma talking to one of her friends enthusiastically, is muddy. Does Kechiche really think desire is so easily reducible? It feels like he is only pawing at the surface of relationships and can’t comprehend their complexities, many of which, including the parent’s effects on the young women, are left unexplored. Why does Emma completely shut Adèle out after the breaking of trust? She is initially shown with another woman, but she disappears without explanation—what happened between them? Emma’s psychology is unfinished. Beyond pursuit, craving, orgasm, and painting, her motivations are murky and trying to piece together her clichéd﻿ passionate painter sensibility can't make the viewer relate to her any better.

I would like to like Blue is the Warmest Color but I have to concede it ultimately is not a friendly piece of film, a flowing form that arouses admiration and pathos. It captures how relationships start, but it sputters when showing them fail. The more weighty French film about two young women—whose consciousness’ get fully explored in half the time—is Erick Zonca’s The Dreamlife of Angels from 1998. It’s a work that dissects the artificial from the carcass of lumpen ideas that long to become art—resulting in the coldly sublime, the true temperature of the experience of being left in “the country of the blue,” as Henry James once called that isolate experience which Kechiche winds Adèle up for, but can’t direct her to.﻿