“England is like some stricken beast too stupid to know it is dead. The English thing worked too well and too long. They'll never get all that ballast of unearned privilege and den of snobbery up into space. Who wants that dumped in his vicinity? They get out of a spaceship and start looking desperately for inferiors.”

The intriguing aspect of mainstream cinema is in revealing the essence of things while lingering over their surface; the way in which superficiality connotes substance is its ultimate spell. Nothing better than Hollywood can describe the American psyche: its fears, ambitions and nightmarish dreams. Commercial franchises reflect in their own structure the main characteristics of their subject, for the themes and situations they (re-)present belong to the viewers’ ingrained frame of cultural references. It is only by rehashing commonplaces, prejudices and familiar sights that a successful franchise can take by storm collective imagination. Should you be interested in the inner mechanics of authority made in England and related subservience, look no further than Bond, James Bond. Since its literary outset through to its celluloid reincarnation the Bond franchise projected the delusional figments of a crumbling empire onto the malleable subconscious of (British) audiences. With post-war England making way to America as the leading imperial power, James Bond supplied the nation with a reassuring dose of illusions and delusional grandeur. As the former empire lost confidence, James Bond grew unafraid; as the country looked hesitantly into its post-colonial future, Bond looked certain and urbanely racist. While his compatriots suffer from chronic emotional constipation, 007 is a self-assured womanizer. One thing the English and James Bond have in common: deference to authority and unconditional trust in Her Majesty. 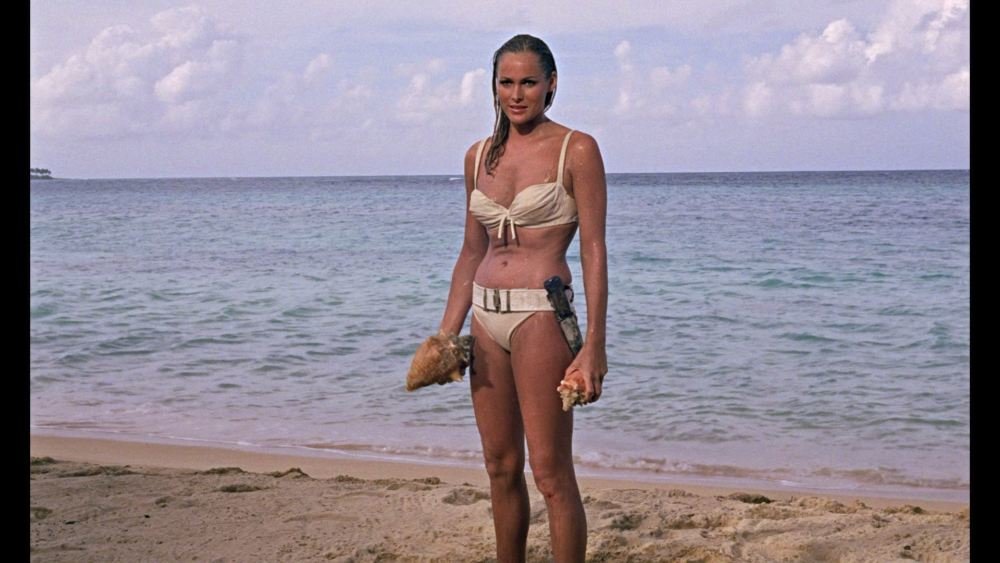 As early as a few scenes into Dr. No (1962) and Bond is ordered by M to change his weapon of choice, an old Beretta, which he of course immediately does rattling off a series of polite “yes sir,” “thank you sir” and so, obediently, forth. Now let’s imagine inspector Harry Callaghan being required to dispose of his 44 magnum… Needless to say, whoever the intrepid petitioner may be, chances are that his request would be met by a disproportionate use of demonstrative violence in lieu of a more diplomatic “no, thanks.” The classical American hero, from John Wayne to Clint Eastwood, has in fact always relied on his own means without ever subscribing to any social contract. America being a country of settlers founded on genocide, the only rule that ever mattered is, to put it mildly, “survival” of the fittest. When the law, if any, is broken in the (wild) west, a new order is simultaneously being set (that of the strongest over the weak); by reclaiming legitimacy from an illegitimate act (stealing land, killing natives, etc.) "normality" is affirmed without any negotiation. John Ford himself reflected on the deceitful morality of law & order over lawbreaking in his late masterpiece The Man Who Shot Liberty Valance. By contrast, a constitutional monarchy like England cannot afford acts of wild individualism such as the aforementioned; its social fundaments are that of pliancy. When James Bond breaches the protocol, which he has been doing throughout his career, he does so always at the service of authority, never against it. His unruly deeds are not so much acts of defiance as they are acts of compliance towards M and the power s/he embodies whose inner workings and logics remain unknown to Bond, who in fact obeys without asking. Despite the exceptional nature of his actions, this imbalance of power determines their very limits and possibilities. In Quantum of Solace (2008), after a protracted act of faithful insubordination James Bond undertook in order to accomplish his mission, M, who had in the meantime dismissed him, discreetly admits of needing him back after all. Bond devotedly replies: “I never left.”

007’s unquestioning bond to his putrescent empire implies a complete psychological flatness; he is granted a licence to kill, not to think, let alone think too hard. He is, at all stages of any given mission, kept out of the bigger picture. He is unaware of the underlying moral, political and human convictions his actions are meant to defend. He fully endorses his country’s noble causes though he completely ignores their reasons, urged by the racist need to prove the superiority of England yet unable to articulate its supposed merits. Bond is a cold and aseptic bureaucratic machine; he is riddled with neither emotional nor psychological schisms. 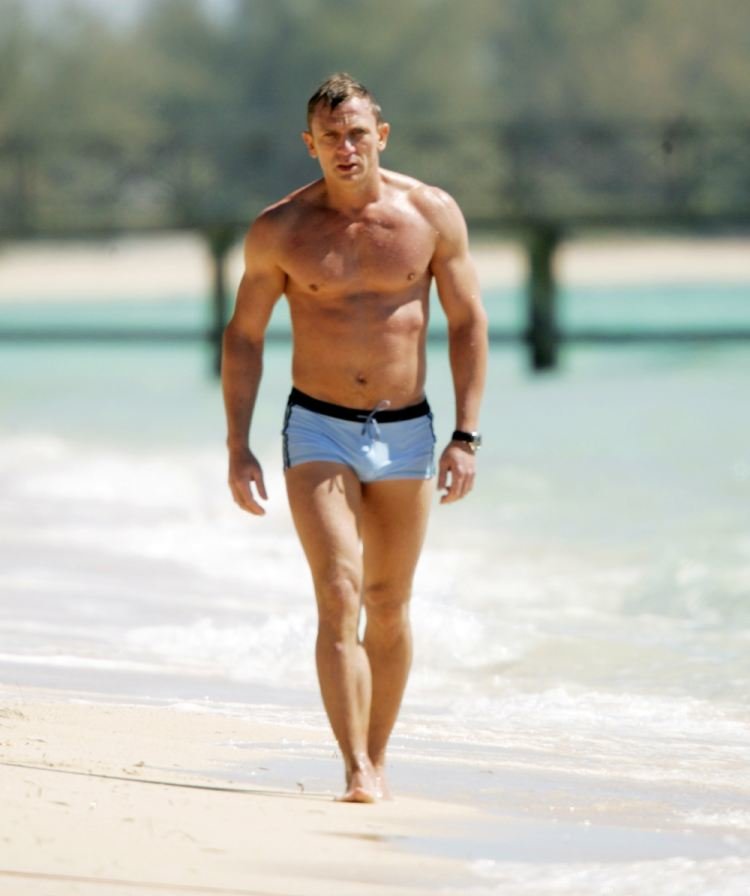 His firmness relies on a blind belief in the clear distinction between good (Queen & Country) and evil (whoever happens to defy the empire). By contrast, his European counterparts—the melancholic cops in Jean-Pierre Melville’s movies, for instance—are profoundly troubled characters, constantly doubting and questioning the blurry line separating good and evil, law and crime. Even when carrying out their duties, they are never totally convinced of their ethical superiority measured against the criminal activities they fight. Of all the gadgets he is supplied with, Bond has no acumen, for the latter would inevitably insinuate doubts about the ethical validity of his job. He is, in the words of a MI6 traitor, “Her Majesty’s loyal terrier.”

It would be unfair, though, to depict this charming servant of the law as an unmovable character. For instance, Bond’s sexuality has undergone a great deal of change throughout the years. From the guttural machismo of a hairy Scotsman (Sean Connery) to the dilapidated metro-sexuality of a blue-eyed lad (Daniel Craig), Bond’s sexuality has chronicled the rise of neoliberal feminism. While society has grown more unequal and socially divided, consumer democracy advocated a rather perverse form of sexual “egalitarianism.” Women took up men’s worst aspects (arrogance, self-obsession and insensitivity) and called it emancipation while men were neutralized and objectified. Instead of acknowledging the rich diversity of differences, submission to the universal masculinity of capitalism passed for liberation, sexual and otherwise. And so was the Bond franchise too, M became a woman, though retaining the position's essentially masculine characteristics and Bond became the sexual object to look at instead of the Bond girl. The crass chauvinism of Bond was diluted with a very topical dose of phallic femininity. Reversing discrimination rather than abolishing it remains the core of neoliberal gender “equality.” In the latest installment, the meta-Bond Skyfall (2012), our hero even hints at a possible gay experience he might have had in the past when provoked by a naughty Spanish-Chinese terrorist (Javier Bardem) in a glorious blonde wig. Unauthorised to openly declare his sexual preferences, Bond’s sexual life, like the rest of it, is a by-product of trends, political opportunisms and Her Majesty’s whims. An almost symbolic castration had taken place in Casino Royale (2006) when having his testicles tortured by the villain, Bond, after having begged for more as a way of showing his manhood, is threatened to be fed what he apparently doesn’t value. 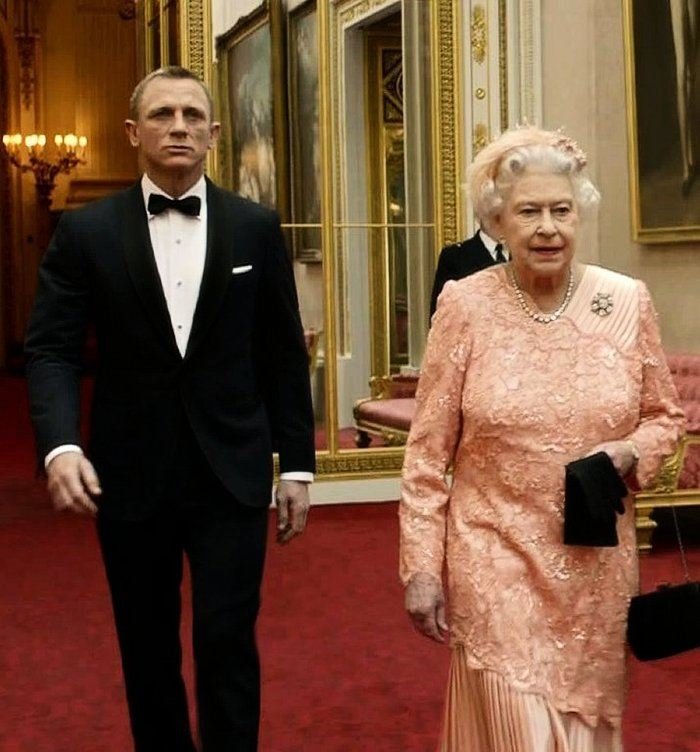 This post-heterosexual Bond is not a sexually liberated man finally freed from the manufactured impositions of patriarchal roles but only a milder version of the same old phallic gunmen with a penchant for assertive old women. In Golden Eye (1995), M (already Ms Dench) had in fact sternly reprimanded Bond by telling him: “you are a sexist misogynist dinosaur and if you think I haven’t got the balls to send you to death you’re very much mistaken.” In declaring so, M, in all her fascistic frigidity, reminded Bond that regardless of her and his gender, power relations were unchanged. Everything, from his movements to his sexual life is dictated by authority, however spectacular his exploits might be, they are neither improvised nor self-willed. As a diligent MI6 employee reminds him in Golden Eye, James Bond has “the right to kill, but not to break the traffic laws”—very English indeed.