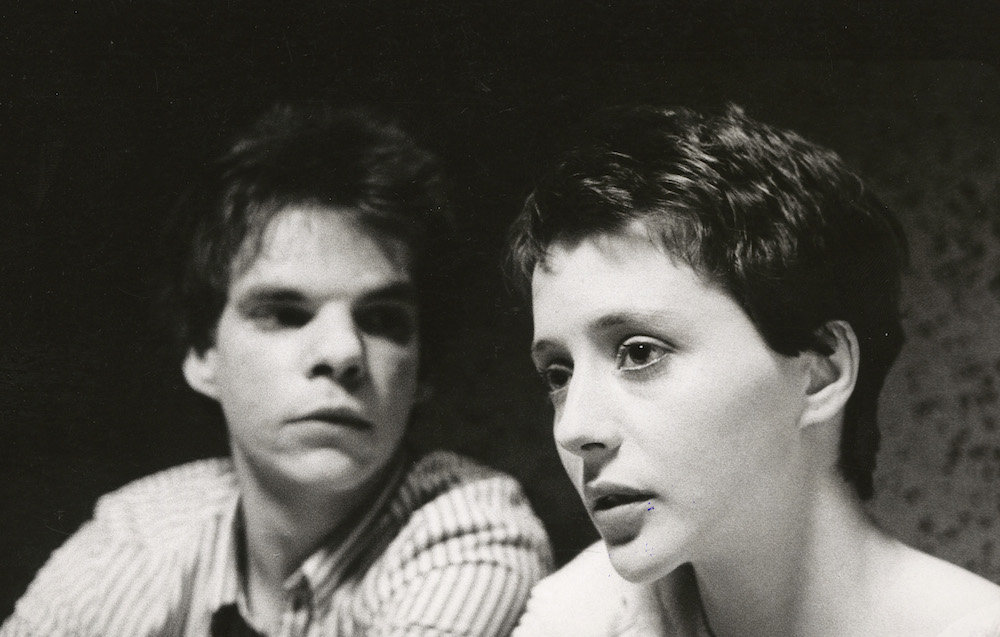 Leos Carax’s debut film Boy Meets Girl (1984), now beautifully restored and showing at the Film Forum from August 8th (as part of a larger Carax retrospective),﻿ is a manual on egocentricity. Posturing as a story of heartbreak, love and finally tragedy, Boy Meets Girl is in fact a soapbox for young Alex (Denis Lavant) to explain his extended ontology and the distended sense of its worth. Alex’s disinterest in cooperating with the world is matched only by his insistence to control it. What we are left with is transcendent self-involvement through time, space and person: otherwise known as being in your twenties.﻿ Shot in black and white and set in the Paris of anytime, Carax with one hand tips his cap to love story nostalgia and with the other fondles the petty egoism of love.

As the title suggests, boy does indeed meet girl. Alex is our boy, who when we meet him has been left by his girlfriend Florence for his best friend Nicholas. Mireille (Mireille Perrier) is our girl; also newly single after her older, colder boyfriend, Barnard confesses his unrequited love through their apartment building intercom. The self-centered ways Alex and Mireille deal with their heartbreaks are the very forces that bring them together.

Alex is a sort of artist-wanderer, more wanderer than artist. He moves with the aimless directionality of someone who knows his neighborhood inside and out. At his small flat, behind a piece of framed fine art, Alex has drawn a map of Paris onto the wall. The map is marked with significant events in his life: first kiss, first love, his high school, his bank, etc. Otherwise the map is empty: the city does not exist without him.

Alex never investigates the reason Florence leaves him for Nicholas. He has little interest in introspection. Instead he interprets it as a classic crime against the hero. “My girlfriend left me for my best friend. Same old story.”

In an odd scene, Alex has shoplifted a record and is delivering it to Florence as a parting gift. As he walks the corridors of Florence’s building, we hear Florence in voice over talking to Nicholas. She and Nicholas are talking about sexual preferences such as fingers in bottoms and cunnilingus. Is Alex going to walk in on them in bed? How can he hear them all the way down the hall? Well, he can’t—the conversation is a fantasy acted out in Alex's head. Imaginary Florence goes on: she compares Nicholas’ preferences to those of Alex (finger up the bottom, of course). Nicholas admits to being a pre-mature ejaculator. Florence wishes Nicholas would only be as sexually adventurous as Alex. Then they could really please each other. What a lovely fantasy this is for the scorned lover: to imagine his ex post-coitus complaining that she doesn’t have it as good anymore. Alex is not attempting to mend a broken heart but stroke a broken ego.

The only remedy is a new lover, sexual-validation as self-worth. Alex, in a normal wander, overhears Barnard breaking things off with Mireille. Alex’s eyebrows raise and his loins pique.  He follows Barnard, who accidentally drops an invitation to an upcoming party when paying his tab at a bar. Alex takes the invitation back home, determined to find the rebounding Mireille there.

But Mireille is far from wanting a rebound. She wants to be taken care of. She wants to be noticed. She’s from the country. The big city has rejected her aspirations to act and has taken her man away. She’s considered suicide and indeed, scissors are never too far from her wrists. The sound of water running in the tub asks if she intends to bathe or the other. But there is a drive for life in her yet. Momentary jubilation, glimpses of things she loves like music and tap dancing creep into her life. Although the scissors are always nearby, she will require assistance if she’s to end it all. She’s young yet and hopeful still.

Part of why this film works is the gentle glaze massaged into the black and white image. The soft effect powders the faces, without blemish: innocence blossoms. The camera moves gracefully, sometimes with much style, but never overdone. There are slow pans and floating tracking shots. Carax allegedly did not know how to operate a camera when he made the film so credit is due to his vision and to Jean-Yves Escoffier for executing it. In most scenes, the characters are illuminated richly and everything around them drops off into blackness. The effect is theatrical on the one hand and self-important on the other. The light is cast at every moment on jobless twenty year olds rather than Paris. The city of light itself, neglected in darkness.

When Alex and Mireille finally meet late in the party, late in the film, it is apparent nothing will happen between them. They have no chemistry, trading in learning about each other for talking about themselves. Mireille is too distraught over Barnard and the difficulties of big city life as a failed actress. She tried to make it big for one whole year and it didn’t work out! What ever will she do? Her answer is feigned suicide. Alex’s answer is that they be lovers. Mireille continues to drown herself in wine. Alex bargains for love in the form of a maniacal monologue he himself refers to as diarrhea. But oh how Alex enjoys relieving himself.

He tells Mireille being with her is like a dream, and that from moment one he’s been in love with her. He will do anything she wants. He will love her until she is shriveled and gray—through all time. But it gets better, for Florence will witness their magnetic love and want to be a part of it too! Their love will multiply with this new addition. And Alex, the selfless man that he is, will be the “go-between” lover, satisfying two women as if they are one. What sweet music to a sad girl’s ears…

But the party ends and miraculously they head home together. Carax seems to understand picking up a girl at a party is sometimes just about staying until the end.

Waiting for the train to leave, Alex uses the bathroom in the station bar, but is distracted by a drunkard playing pinball. The bouncing lights hold his attention like a cat chasing a laser pointer. By the time Alex realizes what he’s doing the train is gone with Mireille on it. He rushes to her flat. She’s sat facing out the window scissors to her wrist. When Alex bursts in she hides the scissors to her chest and as he embraces her from behind, the scissors dig in.

The world Alex believes he’s in doesn’t align with the world breathing around him. He tells Mireille at the party that he likes to view his life as a biography. He reads of his own actions rather than takes part in them. And because of that he is freed from the responsibility of feeling consequence. But death is different: irreversible, the last pinball slips past the flippers.  Alex faints upon realizing what he’s done to Mireille. But when he comes to, his world will have changed, his effect on those around him will become real. The morning light will illuminate the city around him. It’s time to grow up, boy.