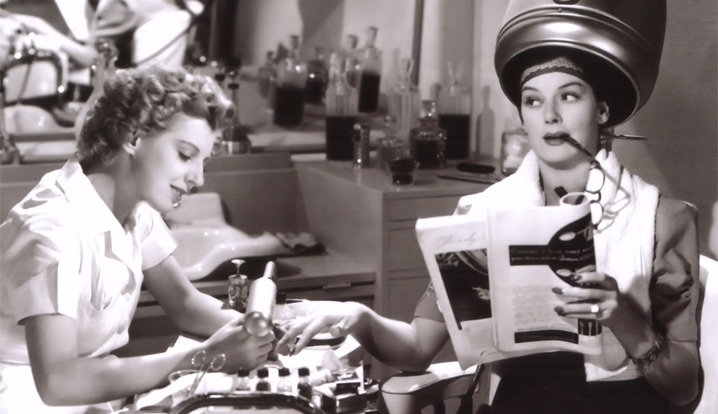 Each side of George Cukor’s The Women is designed to defend against the other. The calculatingly cynical side, a flock of society matrons yapping homilies about how to use men, and how naughty they are to use men, and how naughty they are to say it outloud, is somehow as self-congratulatory as it is self-derogatory: a mockery of what women would be like if they said what they thought, a mockery of what women think (mani!), a mockery of women’s dependence on men they use, a mockery of the stupid men. That the women themselves do all the mocking both undercuts the snobbery and asserts it, as they invite the audience into a confidential session of friends (tell the girls what it’s really like in the locker room, beneath those fake relationships outside—) who actually are enemies (—everyone here is fake, and don’t you believe a word they say). It’s the original Sex in the City, with much better words to decorate dumb ideas in, women celebrating their own exploitation knowingly, and each other’s exploitation even more.

The other side, the calculatingly innocent side, is the dumb story of a girl who actually loves her husband but has become so jaded by the cynical world that she doesn’t realize it. When she does, she dutifully becomes cynical herself, a ready-and-willing-bitch, and exploits old enemies to get him back. The lesson, for anyone who came for tears, is that innocent love prevails. A favorite Cukor theme, that recurs from the start to the end of his career: innocent friends or lovers, who try to preserve their innocent affection as they lose their innocence about the world and the people they love. But the two-faced Women could be the only one to take the side of the bitch.

Goddard is beautiful because she makes one of the girls likeable (or vice-versa); Russell’s better because she makes no attempt to. Only uppity Russell as “Mrs. Howard Fowler,” her name declaring her hen among hens, offers no pretense of humanity or human behavior. Instead, she’s the woman, a gossip girl and snoop and money-hunter and nothing else but a snob. As this is precisely the film’s view about all women, she’s it’s real heartless heart, the best incarnation of its cynicism, as hollow as Shearer but deliberately so, telegraphing her intentions, chin-up when they work, clucking when they don’t. Her body makes all the claims for her: Russell moves with her torso slanted just slightly forward (noisiness), while her legs seem to follow the top around. Her hands she hangs limply at the end of her wrists, as if dangling a purse, except when she gets angry, and they toss around whichever way she moves her arms, or when she snaps about how she’s right, drags out the vowels for emphasis, and her hand darts at whomever she’s talking to as a directive, so she doesn’t have to look at them instead.

Cukor wrings comedy from her loose coordination somehow functioning perfectly: flopping around in a gym as she has a conversation during exercise class, flapping her arms in hissy-fit as her hands snatch every fragile object around and chuck them across the lawn. Usually, she’s dressed as the mad hatter, in oversize suits and bows and hats that never fall off her head as if by force of will. I remember her glasses hanging on the edge of her nose, as if they’ve fallen more and more the further she’s slanted over the years; but perhaps that’s Maggie Smith in Cukor’s turn-of-the-century pot comedy of manners thriller, Travels with My Aunt, for whom Russell’s performance is in every way a prototype. Both seem dangerously ready at any moment to spring up, or stop moving, and have their clothes keep on walking past them. Both, eyes wide, limbs spastic, smile curling up impatiently, snobs aflutter, act shocked as they say the most shocking things, and like Chaplin, intimate gracelessness with total grace.

The Brassy Babies Dossier is an irregular feature in which we discuss cute girls and why.