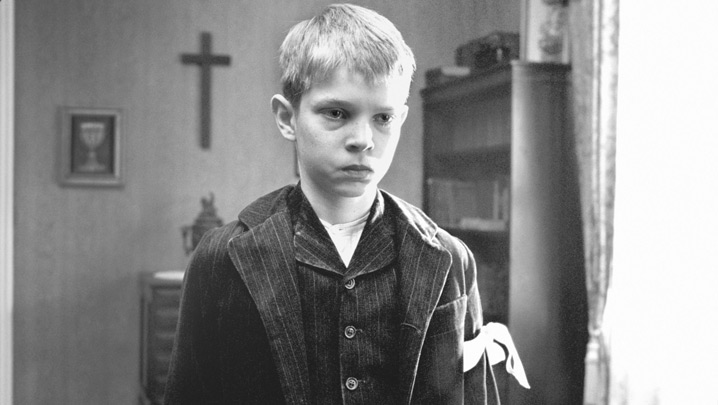 In a Competition line-up that is intentionally overwhelmed by intentionally controversial cinema (Tarantino, Noé, Park, von Trier), Michael Haneke shows them all up by making a respectable picture.  White Ribbon is more like a Western or an American television series than anything else, which is what makes it so much more audacious.  Simply, it deals with community.  It is a small village community bound to the estate of a local land-owning baron, and it takes place right before the First World War.   But the setting seems arbitrary; Haneke is dealing with his perennial themes of oppression, repression, violence, and hypocrisy in bourgeois families, and whether this all comes in black and white in the first half of the previous century or color in our current one, society remains the same, and so does Haneke’s incision.

White Ribbon’s boldness comes from showing a group of this society rather than a single family (Caché) or disconnected individuals (Code Unknown); the repetition of cruel patriarchs, exploitation, and silence reigns not among one but among all. Haneke, in this film that feels sprawling and restrained enough to be based on an old novel (it’s actually an original screenplay), conjures an atmosphere similar to Bela Tarr’s Satantango, of the grave, spare tight spaces of family houses and local gatherings that confine and bear down on the innocent and the guilty alike.  Stark digital photography eliminates subtlety of lighting, instead leaving only true dark or blinding white tones, where shimmering wheat fields and the empty spaces between houses in the small village cut unfriendly geometric space across the frame, and at night the insides and outsides of the village can be lit only by candles and torches.  It is a cold world, but one where children visit each other’s houses, the village’s teacher courts the baron’s nanny, and he, the doctor, and the parson all make house calls.  The community exists, but does not feel.

Weaving its way through this setting is paranoia, for violent and unexplained crimes lashing out at both the children and the adults, the poor and the rich of the community, begin with White Ribbon’s first shot and continue unabated and unsolved.  A doctor’s horse is tripped, a local disabled boy is beaten, a barn is set on fire: all serve to continually heighten a sense of ambient anxiety around and within this group that lives together but never seems close, never relate like humans.  Where another film might make dull social-psychology observations of cause-and-effect (beat a boy and he might torch a barn), this one is subsumed by the idea of a town organically manifesting terror through its quietly unending unhappiness.   As in Dostoyevsky’s Demons, the hint of a conspiracy behind the scenes causing horrible disturbances paradoxically gives a more concrete sense of communal activity than the barren visible relations between people of the town.   It is in granting so much pain and power to a community, to a group of people—and especially the town’s children—seen and unseen alike that White Ribbon strikes as something new brought to the cinema screen, or, perhaps more accurately, something old reinvested with some of its old power.