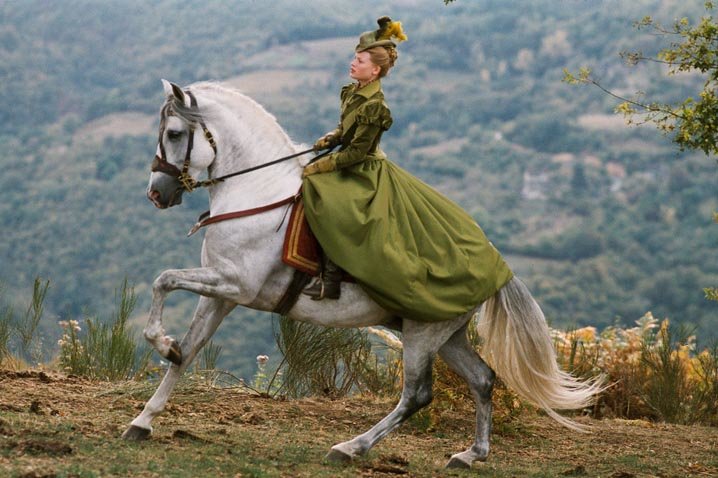 "When Bertrand Tavernier embarked on his first period piece, Let Joy Reign Supreme, some 35 years ago, he produced a stunning portrait of life at the court of the Bourbons in early 18th century," writes Dan Fainaru in Screen. "This time he goes back in time another 150 years, to one of the darkest, most tormented, periods of French history, using for his backdrop the brutal wars waged by the Catholic court against the Protestant dissidents, and doing his best to integrate a powerfully emotional love story into the course of history, and do justice to both. It is an impossible mission at which he almost — if not quite — succeeds."

"Scattered boos greeted Bertrand Tavernier's visually and emotionally embalmed 16th century soap opera as the credits rolled on [Sunday] morning's press screening, but I'm pleased to say I didn't join them," announces Guy Lodge at In Contention. "I was still shaking myself from the stupor induced by its Harlequin-grade love triangle (further sides added in due course), centred on Mélanie Thierry's titular royal, easily the most attractive and inanimate object of mass desire since the iPad."

"The Princess in question is Marie de Mézières, a beautiful young heiress in love with the Duc de Guise but promised to his brother." Geoff Andrew spends the rest of that paragraph for Time Out London spelling out the ensuing complications. "It's a fairly complex story, then, but Taverier handles it with the assurance characteristic of his finest work; he's as at home with the brutal battle sequences as he is with the more intimate scenes between Marie and her various admirers.... Old-fashioned it may be, but Tavernier's film impresses from start to finish."

"Tavernier pokes a real hole in costumed romance," writes the Hollywood Reporter's Kirk Honeycutt. "Everything feels all too real here. There is little room for grand gestures or noble sentiments. Combat is nasty and obscene. A wife cheating on her husband is sordid. And when a man truly loves and respects a young woman, that love is not returned. Despite this — or perhaps because of it — The Princess of Montpensier is one of the finest costume dramas in a long while."

"Princess is a throwback to big-scale bodice-rippers of the past, the kind that Cahiers du cinéma used to trash on in the late 50s. One can see why." keithsim in a dissenting entry at the IMDb's blog: "Tavernier seems to have been afflicted by the costumes, the swordplay, castles, and horses and likely nostalgia for the films he grew up with, like Fanfan la Tulipe. Montpensier has a much more serious intent than Fanfan and its ilk but his characters often act as if they stepped off that film and into this one. It's sumptuous to look at it but it doesn't appear to have real people in it. When they fight it's painstakingly choreographed with outlandish Pirate King moves, instead of real savagery. Even when they're naked these actors are moving around in costume."

Brad Brevet: "It's repetitive treacle based on Madame de La Fayette's 1662 short story in which the characters make the same mistakes over and over again until the very end where they have no choice but to zig when all they'd done to that point was zag."

Updates: "There's exactly one interesting moment in The Princess of Montpensier," writes Matt Noller at the House Next Door, "when Marie and Philippe's father consider their business arrangement sealed at the precise instant Philippe breaks Marie's hymen. But Tavernier does nothing more to advance the idea of patriarchy-as-transaction; it's just another element passed over as the film trudges dutifully toward its conclusion."

"Spirited, robust and intelligent, this is a film that courses with life and its passions, not formality and protocol," writes Todd McCarthy. "Where the film falls short to a noticeable extent is with Thierry. Striking enough to be entirely credible as a Helen of Troy beauty who might inspire men to go into battle for her sake, the young actress nevertheless lacks the craft and emotional transparency to reveal what's going on inside Marie. There are screen naturals who can expose the workings of their charcters' hearts, mind and whims with seeming effortlessness, and such a performer would have helped raise The Princess of Montpensier from a fine film to something even better."

"[F]or me the entire lengthy film was on costume-drama autopilot, with none of the wit and fire that (for example) Jacques Rivette brought to his adaptation of Balzac's The Duchess of Langeais." Mike D'Angelo at the AV Club: "We can only hope that this year's Competition slate was back-loaded."

Updates, 5/19: "In his dovetailing personas of critic, historian, documentarian and mad movie lover (rivaling perhaps only Martin Scorsese for his encyclopedic knowledge of cinema history), Bertrand Tavernier is particularly well suited to the demands and difficulties of the large scaled though deeply personal brand of epic, classical moviemaking," writes Patrick Z McGavin.

Update, 5/21: "IFC Films announced that it has acquired the U.S. rights from European studio STUDIOCANAL," reports Peter Knegt at indieWIRE.

Site. Page at Cannes. Audio from the press conference.