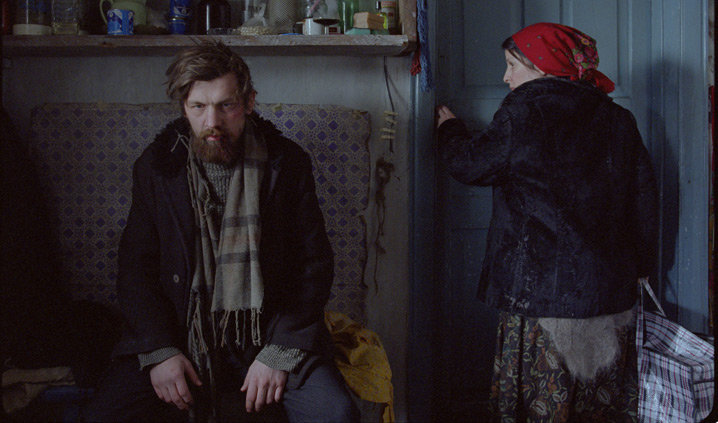 I’ve been thinking a lot about Alain Resnais at this festival, not just because his masterpiece Wild Grass played here last year, but simply because I continue to find such strong echoes of his art and influence in today’s cinema.  Mainstream cinema and television are now suffuse with the kinds of flashbacks and reverberating memories of events that made his films so experimental, but the film that surprised me the most with a Resnais connection was documentary filmmaker Sergei Loznitsa’s fictional debut, My Joy.  It is perhaps not coincidental that Resnais too started making documentaries first before moving on to fiction, and indeed My Joy’s striking structure is directly inspired by a strange record of anecdotes that disturb the story of a young truck driver’s route through the Russian countryside.

Starting with the one man, his truck, and the road, Loznitsa’s film finds good reason to branch off from that singular movement in newly opened directions of story, as the region the man travels through seems a repository for Russian history, miscreant deeds and shackled existences.  Resnais can be found here in this crevasse-like attitude towards a film’s story, where pitfalls of history, character, and place await you along what seems to be a straight, flat path. A hitchhiker, an old army veteran, gets on the truck and jumps the story off the road to an tale of corruption in the Soviet army at the end of World War 2; in a later scene, the driver is walking through a town market, a man shoves him, and the camera decides to follow that rude man on his pushy quest until a minute later being drawn away by an old woman plodding across a cemetery; a camera pan covering a distant figure in the landscape suggests the story could also head in that direction, only to end up sticking with the driver; but an establishing shot of a beautiful house turns out to be a sudden jump 50 years into the past, only to set up the murderous history of the house which the driver will later enter in the present.

To be precise, the story is never distracted, nor even curious by these people and places, not in the structural way a film like Last Year in Marienbad or Muriel would be, infusing the present with slivers of other things; My Joy is onto some thing else.  Its wavelength is less structural than physical, weighted, anecdote based.  Perhaps it has something to do with Loznitsa’s documentary roots and seeing a myriad of stories stuck in the mud all around a real road.  Those stories are indeed a dreary, crime-ridden lot, traffic cops taking advantage of passing drivers, corrupt army officers, rude hookers, peasant bandits and selfish widows—the Russian countryside seems a greedy place of entrenched moral maladies and conniving thievery, all suggestively expanding into and out of a history of equal rascalry.  But the thrust isn’t the themes or even the grey, pebbly atmosphere, but rather My Joy’s commitment to punching out unexpected corners of a simple starting place—a man on the road—to create a nubbly story movement where on a dark night, new, wretched situations may always appear like light breaking in through the crack in a door creaking open.