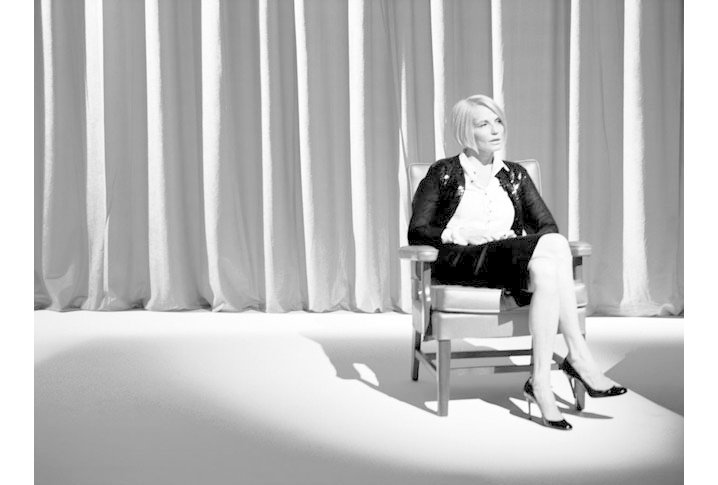 "Premiering at the Directors' Fortnight, Shit Year, Cam Archer's second feature (after 2006's mildly experimental gay coming-of-age tale Wild Tigers I Have Known), is more satisfying to say than to watch," writes Melissa Anderson for Artforum. "Ellen Barkin stars as Colleen West, a just-retired actress still recovering from her breakup with Harvey (Luke Grimes), a perfectly sculpted ephebe who costarred with her in a play. Archer's film, mistaking willful incomprehensibility for artfulness, unfolds as a series of disjointed, dead-end vignettes (some involving Colleen's experiments with 'simulations' to bring Harvey back, others including craft projects with apples supervised by an irritatingly buoyant neighbor) that Barkin, ever game, can enliven only so much."

"Formally, Archer opts for black-and-white and he is sparer here than in Wild Tigers with the staccato scratchiness that has become an avant-garde trope, filming abstracted dream scenes in a relatively naturalistic manner," writes Howard Feinstein for Screen. "The strategy is logical, because Colleen, who has just retired on account of the failed relationship, is so borderline unhinged that she can't distinguish the real from the imagined. Given her state of mind, minimalist surreal scenes of her attempts to purchase a simulation of her ex-lover are almost credible."

"Surrealistic and impenetrable, the film shows the languid woman having flashbacks, flash forwards and merely flashes as she contemplates the long and successful career she's walked away from." Ray Bennett in the Hollywood Reporter: "Walks in the sparse woods with a chatty neighbor (Melora Walters) who apparently doesn't go to the movies so doesn't recognize the star; imagined conversations with an analyst (Theresa Randle) in some kind of limbo facility; and reminiscences with the actress's older brother (Bob Einstein) serve to make things no clearer."

"It appears that Archer had too many good ideas without a proper strategy for stitching them together," suggests indieWIRE's Eric Kohn. "While I admire Archer's attempt to tackle the well-worn path of the fading superstar narrative with ingenuity, his high-minded conceits muddy the vitality of Barkin's performance. She spends much of the running time bemoaning her life in abstract terms with little to no wider context. It's like Norma Desmond of Sunset Boulevard wandered into an avant-garde labyrinth and couldn't find a way out."

Shit Year "screams final year grad project," finds Matt Bochenski at Little White Lies. "Unconventionally edited and abstractly shot, much of what the film has to offer comes from the sound mix, which plays around with tone and texture, sadly to the point of distraction."