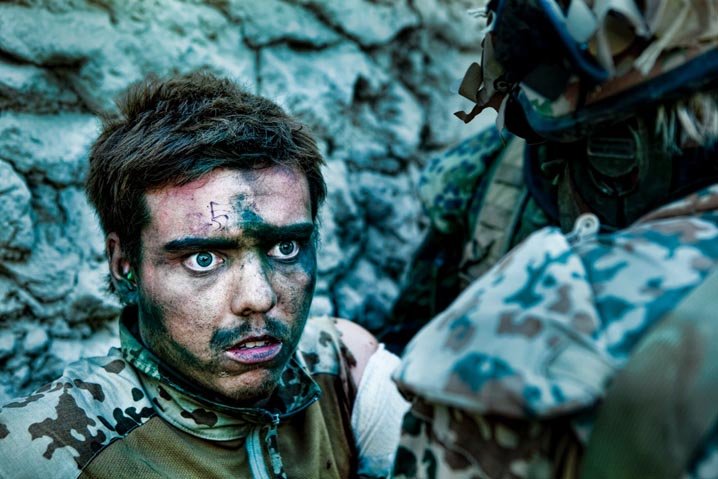 "Danish filmmaker Janus Metz's gripping documentary feature Armadillo, named for a base in Afghanistan where soldiers from Denmark are fighting against the Taliban, already has created controversy in his homeland," writes Ray Bennett in the Hollywood Reporter. The volume on that controversy is about to be turned up, too. The film's just won the Gran Prix at this year's Critics' Week in Cannes.

Bennett: "The film depicts six months in the posting of a handful of young soldiers and includes a frightening sequence in which a patrol faces a Taliban ambush. The hellish skirmish ends with a Danish hand grenade killing several insurgents. The soldiers move in and with the danger still grave they take no chances, firing round after round into the fallen enemy. Still high on adrenaline and relief, their debriefing involves boasting and laughter. The documentary's coverage of the incident has embroiled the Danish military in questions about appropriate behavior in combat situations."

"Keeping himself and his crew out of the picture, Metz is careful to present his intimate observations of the division, the bond forged in shared adversity and the addictive high from close encounters with matters of life and death," writes Allan Hunter in Screen. "Unsensational and strikingly shot by Lars Skree, Armadillo is both absorbing and thought-provoking; qualities that make it a significant addition to the documentaries on the war on terror."

It's an "extraordinarily forceful documentary," agrees Fabien Lemercier at Cineuropa. There's a trailer at the site.

Vietnamese writer-director Phan Dang Di's Bi, Don't Be Afraid has won both the Society of Dramatic Authors and Composers' SACD prize for screenplay and the Association of Independent Cinema for Distribution and the Main Fund for Social Activities ACID/CCAS prize. I'll be on the lookout for reviews. Update, 5/22: "Grounded in the authentic bustle of Hanoi and the uncomfortable interplay of familial relationships Bi, don't be afraid! is a thoughtful cinematic exploration of inchoate longing, the messy consequences of physical decline and encroaching death, and confirmation that sex and youthful exuberance spring eternal," writes Lisa Nesselson in Screen. "Frankly and overtly sensual with scant dialogue, this contemporary portrait of relatives living in close quarters while harbouring secrets is conveyed with impressive visual assurance."

The OFAJ (Very) Young Critics' award, presented by a jury of 24 French and German high school students, goes to Sound of Noise, directed by Ola Simonsson and Johannes Stjarne Nilsson.

IndieWIRE's Eric Kohn: "Light on story but heavy on ingenuity, the Swedish musical comedy Sound of Noise portrays musicians as the ultimate outlaws. In truth, the movie only incidentally relates to the musical genre, since everything onscreen is ostensibly diegetic — but magically so. An account of several villainous drummers intent on wreaking havoc across an entire city by turning it into their own instrument, its magnificent premise suggests a feature-length version of Stomp forced into the structure of a classic detective yarn." Update, 5/23: "The basic premise of this delightful comedy from Sweden is one of the most imaginative you'll ever see. It's all based on music — raw, elemental and percussive — out of which genuine laughs are wrung from beginning to end," writes Peter Brunette in the Hollywood Reporter. "Sound of Noise may be small in scope, but, in terms of imagination, it's huge."

Among the shorts, Daniel Joseph Borgman's Berik, about the friendship between a blind man and an eleven-year-old boy in Kazakhstan, wins the Canal Plus award and Ariel Kleiman's Deeper Than Yesterday has won the Kodak Discovery award.

In general, with fewer critics and journalists in Cannes since the financial meltdown in the fall of 2008, it's been difficult finding reviews of films screening in Critics' Week, but here's what we've got so far on the rest of the lineup.

"Cheol-soo Jang's Bedevilled tells of two young Korean women raised on a remote island in a brutally uncaring community," writes Ray Bennett in THR. "One has escaped to the big city but remains wrapped seriously tight and when she returns to visit her friend, whose plight is dire, one of them goes batty and kills everyone..... In his first feature, the Korean director shows a good grasp of how to build gradual suspense although he has a worrying appetite for starting scenes with close-ups of anonymous feet and he doesn't quite know when to bring the violence to an end." Wildgrounds has collected more reviews.

On Tuesday, Mike D'Angelo, writing for the AV Club, was glad he "trekked over for The Myth of the American Sleepover, making an appearance in Critics' Week after winning the award for best ensemble at South By Southwest a couple of months back. First-time director David Robert Mitchell has indeed collected a remarkable group of kids for his slightly clumsy but hugely endearing high-school nostalgia piece, which plays like a gentler, sweeter version of Dazed and Confused." David Poland talks with Mitchell, but the video interview that's set Twitter aflame is Jeffrey Wells's.

"Sandcastle is a sensitive and personal work that makes unforced associations between memory and repression, male rite de passage and historical consciousness, aging and national amnesia, idealism and death." Maggie Lee in the Hollywood Reporter: "Boo Jun Feng's debut feature about a young man's discovery of his late father's involvement in Singapore's suppressed student movement in 1956 handles this touchy subject with a maturity and gravity rare among his compatriots. However, Boo also suffers from the habitual reflexes of neophyte arthouse directors, who are prone to aesthetical posturing. So even with a tender and moving denouement, the film is paced like a plane forever encircling the airport without touching down." More from Allan Hunter in Screen. The grades at Letras de Cine are only so-so.

Michel Leclerc's The Names of Love opened this year's Critics' Week and Cineuropa's Fabien Lemercier finds that this "feel-good, intelligent comedy... cleverly combines contemporary history, the themes of family, memory, integration and political conscience with the story of a love-at-first-sight romance. It is aesthetically captivating and carried by the pace of the narrative and quality performances by its lead actors: Sara Forestier and Jacques Gamblin." More from Peter Brunette in THR.

"In Marc Fitoussi's Copacabana," writes Joan Dupont for the New York Times, "Isabelle Huppert plays an infantile mother who embarrasses her conventional daughter, played by Lolita Chammah. Gaudy and insouciant, Ms Huppert’s Babou is a dropout from society, a character from another age. She smears her eye makeup beyond limits, wears furs over miniskirts, dreams of escape to exotic havens — like Copacabana — and seems to be careening toward disaster. Ms Chammah, who is 26, plays the mature and demure Esmeralda who turns on this excessive mother and rejects her." The Telegraph's David Gritten finds the film to be a "low-key delight," but for Peter Brunette, writing in THR, "One can only imagine the evil deeds that Isabelle Huppert must have committed in an earlier life, or possibly some hugely mounting debts, that have led her to accept the principal role in this completely misbegotten film."

Quentin Dupieux's Rubber already has an entry — and distribution as well.