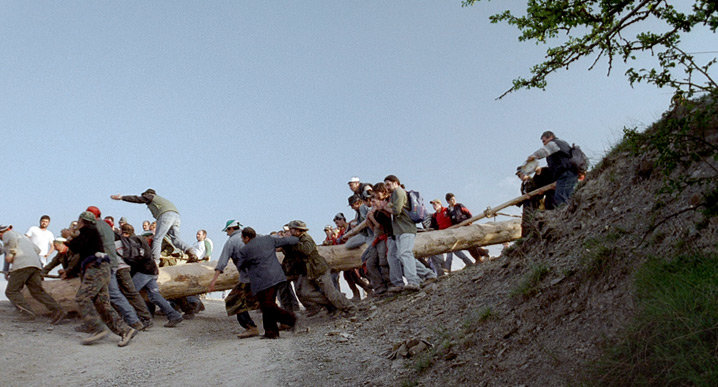 There are too many great moments to mention in each section of this four part film set in the Italian countryside—the first part centered on an aged, infirmed goat herder, the second on the birth and first days of one of the his baby goats, the third on the use of a huge tree in a small town's Christmas celebration, and the final section on turning that tree into coal to heat the herder’s town.  But the most impressively choreographed single shot of the festival occurs in the first part, where a long take covering the progress of a religious parade through town also captures the awe-inspiring performance of the old man’s dog, who practically directs the long scene by first barking to move people around, and, as the shot continues, removing the stone block holding a truck from rolling back down a hill.  Which it promptly does, crashing into the goat pen and releasing them; whereupon the dog rounds up the goats and send them on their way.  Bravura long takes often show off by cramming as much synchronicity and precisely timed choreography in an unbroken moment, but to leave so much space, time, and action to the skill of a dog is a level of bravura and audacity few will ever achieve.

It may sound crude, but: Zhao Tao's breasts.  The actress, a nameless, speechless urban specter, wanders around Shanghai in a simple v-neck t-shirt, khaki pants, and an old fan—not even a purse or clutch, as phantom's don't carry such things!  She looks with weight and import at Shanghai all around her, but she's clearly supposed to be a non-presence, the ghost of Shanghai-today, an elegant, empty question mark at the video's center.  Which is why the softness of her breasts, now with a hint of a bra at the edge of cleavage, now seen through drenched clothing under the tee, are such a lovely, simple reminder of an actor, a person, a body in front of the camera rather than a telling "figure" of modernity.  By the time it starts raining on her—and no ghost carries an umbrella or jacket—the Zhao's breasts have added something human and concrete to the airy drift ofJia Zhangke's feature.

Hard to choose in this film!  The super soft digital texture of the silhouette against a white wall of a slowly turning windmill?  The "Navajo English" subtitles?  The cellphonefootage of a cruiseship's nightclub?  I think actually I simply liked the harsh, gravelly sounds that overwhelm the soundtrack everywhere from the top deck (from the wind) or the bottom (a nightclub’s music) on the cruise ship in the video’s first section, effort being made not to cover up the direct sound but heighten it to pure texture, distortion contrasting the clarity of the HD images or expressionistically exploding from pixelated, highly raw low grade video.

This film playing in the Cannes Classics sidebar was full of all sorts of realist pleasures from its Rohmerian setting and photography honoring location and actor.  But it was more the tone of the work I enjoyed, a strange mix of Rohmer’s provincial social interactions, forthright, chatty, interfering and sexual, with weird dashes of caricature, quasi-slapstick comedy, details in costuming and behavior that introduces small, more cartoony elements in the tensely casual atmosphere of relaxation, escape, and sexual interest.  It certainly is intriguing enough to make me want to see the few films Davila made, this being his last.

Before the game of artifice begins in the film, William Shimell is casually relating a story to Juliette Binoche, who starts tearing at his tale without him noticing it.  The scene is almost certainly shot in Kiarostami's style of having the actor facing the camera, where, presumably, Kiarostami himself is facing them off screen, so that the actor is acting to the director rather than the actor-character he or she is supposed to be relating to.  I was forcefully reminded of that technique simply because Shimell’s character was failing to notice Binoche's emotion, which immediately removed Binoche’s face to it an abstract place, part documentary on an actor performing a moving emotion, part "pure" character (one is reminded of Takamine Hideko's anecdote of her director Mikio Naruse wanting to direct her in front of plain white backgrounds).  It is a wonderful, and very moving moment.