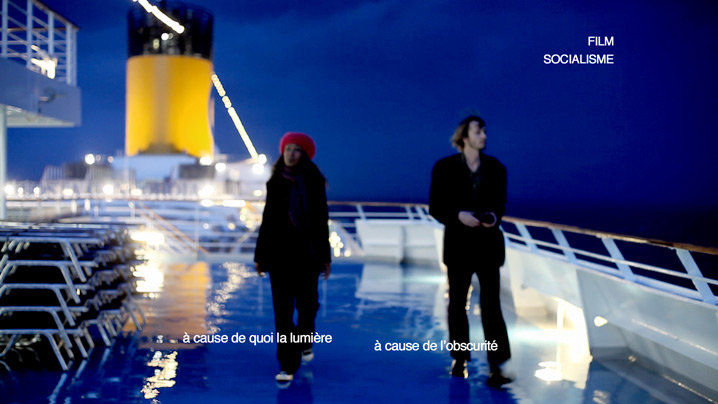 I have admit it up front: I only speak English (which is something of an embarrassment in Cannes, where just about every non-American speaks at least their own language and English).  This leads into my second admission: I only speak English and I want to talk about Jean-Luc Godard’s new video feature, Film Socialisme, a work of cinema mostly in French, German, and Russian spoken languages (and including many more), but experimentally subtitled in English in incomplete, “inaccurate” keywords graphically placed on the bottom of the frame in distinctive spacing that combines some words and leaves others far apart.  The subtitles emphasize what is obvious to an English speaker, and even more obvious to one who only speaks that language: what is missing and left out, what is picked up by the ear but not the eye, and by the eye but not the ear.  I saw a different film than many of the people sitting in the theater next to me, and will see another one yet again when the soundtrack is subtitled, challenging me to follow the sounds, their precise words, and, on top of that, Godard’s humorously sparring linguistic-graphic collage he included with the film in Cannes.  That challenging collage gives but a petite helping hand to grounding the ambitious imagery of the incredible film.

Like Godard’s last feature, Notre musique, the entirely digital Film Socialisme is divided into three parts.  The first is like nothing I’ve ever seen.  Taking place on a Mediterranean cruise ship on which it seems Godard gave a variety of video cameras to his cast to shoot around the boat, ranging in quality from the HD the director himself is clearly shooting in all the way down to something that looks like cell phone camera footage, this section colorfully evokes the captivatingly messy digital panoply of David Lynch’s INLAND EMPIRE.  Like the abrasive, beautiful sound mix, which juxtaposes gorgeous musical excerpts with the abrupt dropping and interrupting of audio elements coming from the left and right speakers, Socialisme’s first part is a dense layer cake of imagery.  It flattens deck upon deck of the ship as we descend and raise, like traveling through the ship in a glass elevator, from the crisp, silhouetted musings of wayward travelers on the top to the canted, Sternberg-by-way-of-Scorsese golden, dripping opulence of the onboard casino, and, on the bottom, the delirious, crunchy raw footage of the boat’s nightclub.  As raw as Notre musique’s opening stock footage montage of hell but infinitely more jumbled, organic, failing, ineloquent, shocking and banal, it is one of the strangest, most free and most beguiling collages of imagery and sound cinema has yet produced, and one produced, like INLAND EMPIRE, entirely by the force of digital cinema.  The wind on the deck of the ship roars like static gravel into the cheap camera mikes, and passing glances of vague characters are seen—a photographer, a wealthy banker traveling with his niece, a brother and sister—as this boat, with its nearly anonymous, self-circulating souls (without being shot on film they hardly seem bodies), seems to go nowhere, do nothing but drift on a radiant, undulating ocean.

The radical off-camera voices of the first part are a net to untangle, manipulated by Godard’s sound design as well distorted by the absurdity of recording direct sound on the ship, leave open who is out of frame, who is saying what, to whom, and when, and the precise, frayed audio jumble goes naturally with the colored glass-plate-on-glass-plate effect of the montage around the ship.  Part two, for me, was the most sabotaged by my lack of linguistic sophistication.  Titled “Quo Vadis Europa,” it is a return to land, a return to high definition, and return to characters in a strange investigation (literally, including a reporter and a camerawoman) into the domestic politics of a small family-run garage in the countryside.  The section calls back to Godard’s work in the 1960s, with the fake interviews of Masculin, feminine (and others), and the love of pastoral architecture and setting of Pierrot and Week End.  Though little can be said by me about the spoken content of the section, the world of a house and a workshop suddenly seem foreign after so long in the glittering confusion of the ship, practically old fashioned and irrelevant, and the charm of the family’s small blonde child, who can conduct an unseen orchestra, dreams music, and paints Renoir replicas, lends something warm and charming to this uneasy settings.

The final section, dedicated to the real and the cinematic evocations of the path the cruise ship takes around the Mediterranean—Egypt, Palestine, Odessa, “Hell as,” Naples, Barcelona—is on more familiar ground to those familiar with Godard’s video essays, here “touring” places whose history is now as factual as it is mythological, both in the older sense and in the newest, of images overtaking past meanings and histories.  Images and history catch up to the real cruise from Socialisme’s first part, and we see marks of the 20th century throughout: the Holocaust and the founding of Israel, the Russian revolution, World War II and the Spanish Civil war, as well as calling all the way back to antiquity’s art and the simultaneous birth of drama and democracy.  How this is juxtaposed to the countryside of the film’s second act is a mystery left until a fuller translation is available—or perhaps simply to another viewing.  Known for decades now for his pioneering use of video, Film Socialisme finally sees Jean-Luc Godard use digital video to the fullest, widest productive, dramatic, and essayistic, potential yet, creating a tremendous open space to explore.  It is, in a word, video as cinematic, and it is an approach and result that absolutely requires revisiting, as this only partially understood viewing proves the video a densely sorrowful but deeply rewarding experience, one worth mining for a long time to come.