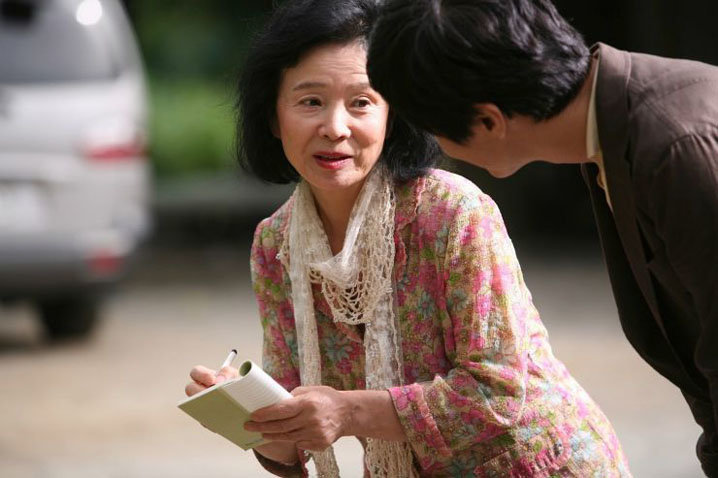 "Korean auteur Lee Chang-dong's quietest and most thematically complete film to date, Poetry charts a grandmother's attempt to write a single poem, while she deals with a failing body and mind, and the terrible consequences of her teenage grandson's irresponsibility," writes Lee Marshall in Screen. "Lee is revealing himself to be something of a Korean Douglas Sirk: like [his] recent films Oasis and Secret Sunshine, this is an intelligent melodrama about a sensitive woman in a bullying male world."

"Opening with a shot of a corpse floating down a river, Poetry is, in fact, a rather odd moral drama," finds Matt Noller at the House Next Door: "though its protagonist is Mija (Yun Junghee), a grandmother who takes a poetry class, that plotline is not the film's primary focus. What is, unsurprisingly, involves the floating corpse, a teenage girl named Agnes who committed suicide after being raped by a group of six boys. One of those boys, Mija finds out, was her grandson. She is contacted by the fathers of the other boys, who tell her that Agnes's mother has not yet pressed charges, and they want to put together a settlement payment to keep that from happening: $30 million, or $5 million per person. Mija must struggle to decide whether or not to turn him in and come up with the settlement money, all while dealing with her recently diagnosed Alzheimer's.... It's ultimately a little scattered, with characters and narrative strands that don't really go anywhere or connect with anything else, like the first draft of a poem in need of some tightening."

"This is a warm, deftly made film that uses the humor and tenderness in Yoon's performance to dramatize the artistic and emotional depths we don't know we have," blogs the Boston Globe's Wesley Morris. "Lee, making his first film since 2007's Secret Sunshine, is astoundingly skilled at maintaining a perfect tone. This could have veered into a comic thriller, like Boon Joon-ho's Mother, or an all-out melodrama. But Lee modulates his touch just enough so that the film's bizarre moral and sexual turns don't derail what is essentially a life-size movie about loss and self-discovery. Afterwards, I ran into a friend outside a sandwich shop who had just left the Palais, and we did something I hadn't ever done here. We sat at a table outside and cried in the rain."

At the AV Club, Mike D'Angelo finds the film "works beautifully on a moment-to-moment basis but falters badly when the time comes to assemble its various vivid elements into a coherent, satisfying whole. Or maybe I'm just doing it wrong, being a prose guy at heart.... In Lee's last couple of films, I'm not feeling it."

But for Geoff Andrew at Time Out London, "Lee gets things gloriously right, and ‘Poetry' is undoubtedly one of the best films in this year's official competition."

"It may go without saying that Poetry adopts a lyrical tone, but this forms the crux of its appeal," writes Eric Kohn at indieWIRE. "In this case, the title says it all."

Interviews with Lee: The Hollywood Reporter and Lee Hyo-won, who has more on the film in the Korea Times.

Updates, 5/21: "With an understated visual style and perfectly paced narrative, Mr Lee has created a portrait of a woman who has, by the end, become an extraordinary vision of human empathy," writes Manohla Dargis in the New York Times.

"Lee has an immaculate eye for minute behavioral details, and a compassionate understanding of the trials of womanhood in a largely patriarchal society, but the film doesn't hit quite as cleanly and devastatingly as his last," finds Guy Lodge at In Contention.

Updates, 5/22: Melissa Anderson for Artforum: "Perfectly paced and performed, Poetry stands out as both a quietly scathing condemnation of male violence (and the craven attempts to cover it up) and an ode to the strength — and moral compass — of senescent women."

Update, 5/26: "We witness the subtle empowerment of a woman with an otherwise fading presence (her looks, her memory, her relevance) in a man's world, hinged on Yun's warmly empathetic if not downright revelatory performance," writes Aaron Hillis in Moving Pictures. "Never wallowing in melodrama and at times funnier than it seems on the outside, Poetry is as evocatively colorful and difficult to define as its lofty title."