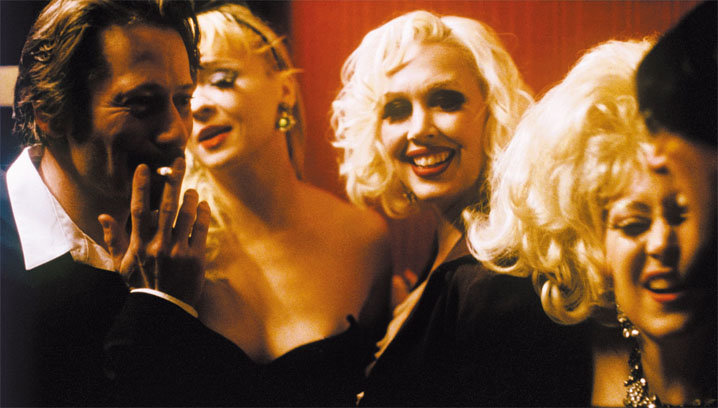 "Working the same seedy, rumpled cool that he brought to Arnaud Desplechin's Kings and Queen and A Christmas Tale, [Mathieu] Amalric himself anchors [On Tour] as Joachim, a formerly successful entertainment producer now reduced to managing a group of lippy American burlesque dancers on a tour of tired French ports — with a gig in Paris their elusive holy grail." Guy Lodge at In Contention: "Story is a low priority here: Amalric strews his lackadaisical narrative with intriguingly tart suggestions of deeper-rooted problems – Joachim has a brittle relationship with his two pre-teen sons, while one dancer is ironically plagued by body insecurities offstage – but is more concerned with incidental and atmospheric details. Indeed, much of the film's richest comedy is to be found away from the ragtag 'family' at the film's center, and in Joachim's encounters with complete strangers."

"Cast exclusively with authentic performers in the style of the 'new burlesque,' a funky, exhilarating form of cabaret and live performance, the movie has a documentary realism and sharpness that carries it through the rough spots and dramatic lulls," finds Patrick Z McGavin at Emanuel Levy's place. "It is really more effective as a series of acts and moments than as a fully articulated work. But when the movie jells, drawn to the habits and rituals of this exotic and eccentric world, it really sings."

"Tournée walks and talks like an actor's film," finds Time Out London's Dave Calhoun. "The best scenes are of the burlesque girls themselves, strutting their stuff in port towns like Le Havre and La Rochelle and doing amazing things with giant balloons and nipple tassles and bantering among themselves on trains and in dressing rooms. These scenes have an ease and energy to them in contrast to some of the film's other, more forced and less credible histrionics."

The performers "oddly inspire nearly everyone who attends their show," notes Charles Ealy at the Austin Movie Blog. "They insist that they're in control and that they'll perform as they see fit. Hence, the feminism."

"Amalric mentions in the press notes names such as Federico Fellini, an obvious influence on the film's playful nature," writes Brad Brevet. "The comparison to a Fellini piece is appropriate, but the film doesn't create enough sustainable layers to justify a nearly two hour runtime while Federico could go on for hours before I ever begin to look at my watch."

International critics rate the film on a scale of 1 to 10 at Letras de Cine.

"What drew you to this particular story?" the Hollywood Reporter asks Amalric, who replies, "It comes from a Colette text called L'envers du Music Hall. Colette was an actress and, in her 30s, was part of music hall shows. Her performances were pretty scandalous — pantomime, where she was a little bit undressed. I always loved her way of writing and what she said. I was looking for something contemporary that resembled the freedom that she had, but I didn't find it. Then one day, I saw an article that talked about the American New Burlesque movement, which I wasn't very familiar with. I found a link between the two. I saw that it was close to what Colette was trying to do. Plus, I'm fascinated by producers. I always wonder how they manage to keep going and take such responsibility. You have to be crazy to produce a movie."

"His role in On Tour is tailor-made for Amalric and he plays it to perfection," finds Fabien Lemercier at Cineuropa.

Télérama has a massive profile of Amalric (in French).

Updates: "Melancholy and meandering, this drama with comic touches doesn't live up to the brassiness misleadingly promised in the neon-styled opening credits," writes Jonathan Romney for Screen. "For all its relaxed idiosyncrasy, On Tour doesn't suggest as strong a personality behind the camera as in front of it, and Amalric's appeal as a director — this is his fourth feature — is yet to prove itself commercially. But his own engaging lead performance will certainly be a selling point."

"Amalric has clearly learned a lot working with such masters of glancing emotion as Arnaud Desplechin and Olivier Assayas, and there are a number of individual scenes in On Tour so arresting and exquisite that they could easily veer off into potentially terrific movies of their own," writes Mike D'Angelo at the AV Club. "Trouble is, Amalric is so detail-oriented that the big picture tends to escape him, even as he beats 'we are fam-i-lee' into the dirt. The film stretches itself thinner and thinner as it goes along, and doesn't seem to conclude so much as surrender; after a while, it starts to seem as entertainingly flashy as the women's routines — fizzy, empty calories."

"[T]his is a film made on French soil and also about the world of French filmmakers," writes Joan Dupont for the New York Times. "When Joachim is thrown out of the theater by his best friend, Mr Amalric says he was inspired by Jean-Luc Godard's correspondence with François Truffaut. 'Their fights sounded as stupid as my characters do; things like, "Your last movie, La nuit américaine, stank — can you lend me some dough?" But it was a strong relationship. And these things happen; one day, you don't even know what you've said — and you've lost your best friend for life. Talented people are terrible, they eat up those around them because, well, they have a job to do.'"

"[T]here's always a dynamism, an awkward hunger for something more in life... that means Tournée avoids turning into a road-to-redemption mopefest," finds Sukhdev Sandhu in the Telegraph. "Quite the reverse: a scene in which he and a gas-station attendant (Aurelia Petit) flirt, at night and separated by plexi-glass, is as touching and as sexy as any in the last year."

Matt Noller, writing for the House Next Door, is impressed with this scene as well: "Amalric (in typically fine acting form as well) locates, through a few lines of dialogue and expressive gestures, a brief moment of connection between two lonely people. It's an exceptional scene (by far the best in the movie, both playful and incredibly sexy), but it doesn't really connect with anything around it. Without a worthwhile base on which to build all these disparate moments, On Tour never entirely coheres. It's pleasant, to be sure, and I recommend it without hesitation, but it's also something of a trifle."

"Amalric, best known to US audiences for his roles in the films Quantum of Solace and The Diving Bell and the Butterfly, seemingly never quite knows where he wants to take the film," finds David Bourgeois at Movieline. "We know little of his character, and the burlesque performers never come across as anything more than not-too-bright objets d'art."

"From beginning to end it's contrived and false," finds the Hollywood Reporter's Kirk Honeycutt.

Cannes has audio from the press conference. 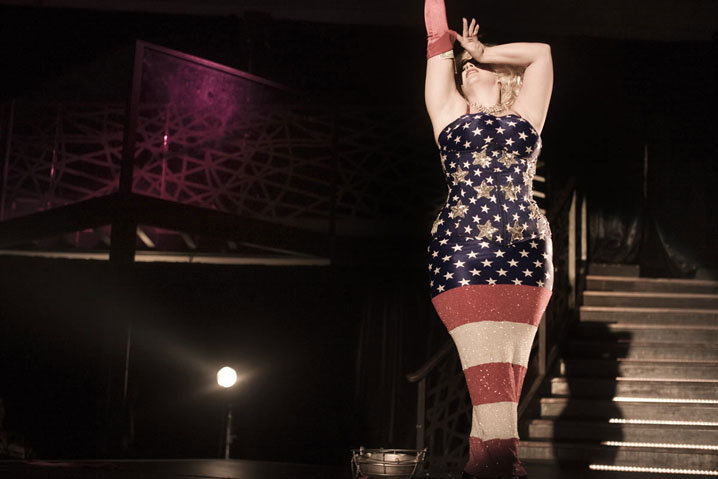 Aaron Hillis for Moving Pictures: "Essentially, the film just isn't as strong when not mining vibrantly weird humor out of eclectic circumstances: A tableau shot of a pissed-off airline pilot at an elevator bank gets big laughs as he sizes up Joachim, but not as many as when the latter hands his cell phone to one of his boys to explain to the person on the other end of the line who Jules Verne is. That levity all but disappears in the last half hour, when Joachim comes to terms with what's important in his life (a yawn of a resolution) and discovers his makeshift family may offer the most intimacy he's ever had, but all the under-the-surface emotions bubbling up don't congeal into the profundity the film perhaps intends. It's a glaring directional flaw, but not enough to shake the glitter-and-scum thrills offered by flea-bitten motels and swinging nipple tassels."

Back in the Hollywood Reporter, Peter Brunette: "On a purely practical level, Amalric's decision to alternate between speaking French and English, in the same monologue, will drive audiences not familiar with both languages crazy. More important, the documentary style on display seems to be intent on capturing some truth about the essential difference between the Old World and the New that never quite materializes."

Updates, 5/14: "It's a not disagreeable time-killer, but hardly a film that will be remembered by festival's end," finds Todd McCarthy.

See, too, Daniel Kasman's favorite moments from the first two days of the festival — and he has more on this one, too.

"[T]he conception of the character borrows heavily from the strip club owner played by Ben Gazzara in Cassavetes's The Killing of a Chinese Bookie), but when the compensations are Amalric's dryly comic reactions to chaos surrounding him, it's tough to complain," notes Time Out Chicago's Ben Kenigsberg.

Update, 5/15: For Screen, Geoffrey Macnab reports that Amalric will be joined by Isabella Rossellini, Maria De Medeiros, Chiara Mastrioianni and Golshifteh Farahani in the cast for Marjane Satrapi's follow-up to Persepolis, Chicken With Plums. Shooting starts in July in Babelsberg.

Updates, 5/16: Patrick Z McGavin: "Amalric is really too much of a good thing, because I think the biggest problem with the film is the lack of balance between the backstage milieu and natural friendships and camaraderie of the women with the entwining story of Amalric's troubled past as a impresario trying to salvage his damaged reputation with his new act."

Dennis Lim talks with Amalric for the New York Times.

Update, 5/22: On Tour's won the FIPRESCI award for the Competition.

Site. Page at Cannes. In Competition.