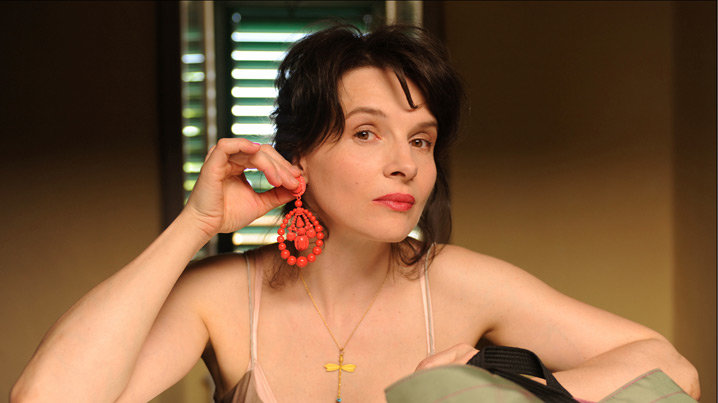 (1) The performance of Juliette Binoche, who is uninterested in the film’s simple, confused/confusing gimmick of having two strangers discuss ideas of originality and imitation, a plot that leads her to try seducing the man (William Shimell) by having them both emotionally act out a false relationship.  Instead of indulging in Kiarostami’s highly controlled “experiment” in fiction, Binoche commits to acting her way out of the film, too nuanced and actorly for Certified Copy’s minimal scenery and concise mise-en-scène; it is a performance where “chewing the scenery” essentially burrows through the film's original intentions.  She in fact distracts one away from the rather boring elaboration and exposition of the film’s central idea, and true to Kiarostami’s documentary roots—and cinematic blood—her moving portrait is a document in and of itself, a pleasure generously observed by the film, but indeed a pleasure that is essentially independent of all story, character, theme, and “direction.”

(2) Early on in the film, when Binoche and William Shimell have just met and have yet to start faking a relationship history, they take a car ride through a small town in Tuscany.  Kiarostami shoots the scene with the camera on the hood of the car, framing the couple in a two shot.  But the deep focus of the camera, the light of the day, and the closeness of the buildings on either side of the thin street make for an amazing effect: halfway through the scene (and the shot) the reflection of the town’s buildings on the windshield gradually reveal themselves, then nearly overwhelm and overwrite our extended view of the actors.  For a film so fastidiously dedicated to spelling out its ideas, this natural intrusion and distraction of what’s important in what we’re watching is an strange, welcome relief, an unusual view of the real world outside our fictional drama, glanced only in reflection.

(3) After an opening preface, Certified Copy has a singularly continuous sense of space and time, following Binoche and Shimell first on their drive out of town and then, for the bulk of the movie, on a real time walk around another small Italian village.  But somehow the factuality of following them without ellipses or interruption through a real space over real time, the tactility or concreteness this would normally imply, is avoided.  Instead, Kiarostami conjures an extraordinary, one-note atmosphere, an almost dreamlike treading on water effect, as if all the streets and cafes were part and parcel of the same one big space in which these two people exist and through which they move, repeated again and for ever.  The specificity of the Tuscan location is undermined, and one thinks of a film like Eyes Wide Shut in the way it tries to both film a very real place and yet hold it floating in an unreal world.  The filmmaker so simply, tightly ensures continuity of location from shot to shot—each shot basically beginning with a view of where the last one ended—that the film takes on a gluey sense of one long, thick moment of time.  Certified Copy has such a contained quality to it that it surprisingly feels less like a quasi-documentary on where the actors rove, as is normal in Kiarostami, than something strange and only allegorically whole and real, a Borges story photographically made to honor Aristotle’s rules of space and time.