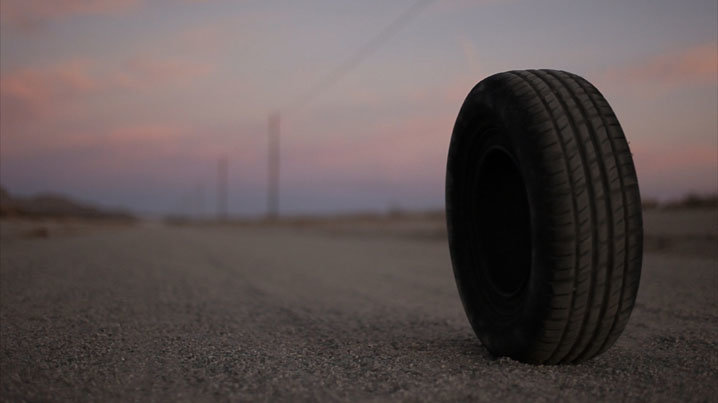 "Quentin Dupieux's Rubber would have made an absolutely stellar twenty minute short," suggests Todd Brown at Twitch. "Yes, this is really a film about an angry psychic tire. And, yes, it is every bit as absurd as it sounds."

"How could it not be brilliant?" asks Sukhdev Sandhu in the Telegraph. "By, at 85 minutes, being an hour too long. By being arch rather than schlocky."

"Though the film is beautifully shot and formally composed, the meta-minded film is deeply ambivalent about delivering any real fun," writes New York's Logan Hill. "It's much more concerned with narrative gimmicks and commentary on filmmaking, via an on-screen audience which 'watches' the film unspool through binoculars, and constant commentary on the 'no reason' meaning of it all. Unfortunately, the meaning is all too clear, and the horror all too disappointing. Worst of all, the tire kills everything (telepathically) in the exact same way, via telepathic, head-exploding powers, so the violence becomes dull and repetitive long before the joke wears out."

For indieWIRE's Eric Kohn, the "more overly ambitious aspects of the movie are also the parts that make it fundamentally hilarious."

"Quentin Dupieux's second feature after Steak (2006) is an irreverent throwback to the 1970s heyday of terror by inanimate object as typified by Steven Spielberg's Duel (1971) or The Car (1977)," writes Allan Hunter in Screen. "Dupieux shows that B-movies can be beautiful by capturing and framing desert images that wouldn't seem out of place in Gus Van Sant's Gerry. The effects are equally polished with a collection of exploding human heads to satisfy gore fans but more importantly a convincingly independent tyre that books into a motel, showers, settles down to watch television or just keeps rolling inexorably down the highway.... Rubber's originality and winning humour combine to make it one of the guilty pleasures of Cannes 2010."

For Alex Billington, catching the flick wasn't "a complete waste because when or where will we see a story about an angry, sentient tire ever again."

This one hasn't fared too poorly at Letras de Cine.