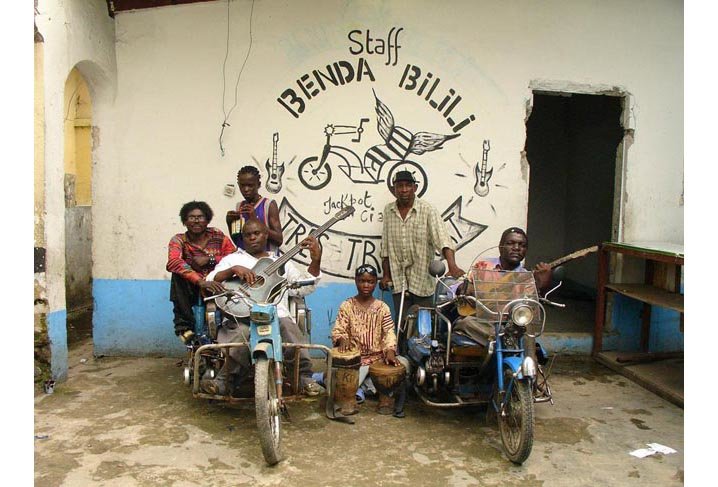 "This joyous French documentary proved a worthy opener to the Directors' Fortnight strand at Cannes," writes the Telegraph's David Gritten. "It's about a group of seven Congolese musicians, the Staff Benda Bilili, four of whom are paraplegic.... [A]t film's end, the Cannes audience gave them a full-throated roar of approval and an extended standing ovation. Deservedly so: this is a remarkable documentary and a music film that is utterly exceptional."

"They've vaulted from the rancid streets of the largest sub-Saharan population glut in Africa, where they played for pittances, to performing before well-heeled crowds in the posh capitals of Europe," notes Duane Byrge in his review for the Hollywood Reporter. "The band takes their name from the Staff Benda Bilili, a street syndicate that lays down the law in the central city, and tries to defend the tens of thousands of street kids who sleep on cardboard and forage the alleys for survival. The paraplegic musicians and singers are a surreal sight: They make their way around on Mad Max-like motorized tricycles and camp down like street nomads in a hideous street square."

"As detailed and also assisted by French filmmakers Renaud Barret and Florent de la Tullaye, the band made a five-year journey from destitution to a recording contract for its supremely melodic music, as well as a triumphant European tour," writes Kenneth Turan in the Los Angeles Times. "As one of the band's lyrics puts it, 'Luck shows up unannounced.'"

"The Benda Bilili! epic is above all a beautiful human adventure, which is moving, sometimes funny, sometimes sad, but always swept along by the consolatory and liberating power of its intoxicating music." Fabien Lemercier at Cineuropa: "Through its subtle portrait of these endearing musicians, the film sketches a picture of Africa as a whole, its suffering and unceasing ability to pick itself up again, its colours and anarchic street life, its women and children. Despite their success, Staff Bilili haven't lost sight of all this: 'Today you have a plate, but yesterday you ate off the floor. Never forget, my friend, the wind can change!'"

Page at the Quinzaine site, where you'll find a clip; photos from the party. Staff Benda Bilili on Last.fm, MySpace and Wikipedia.