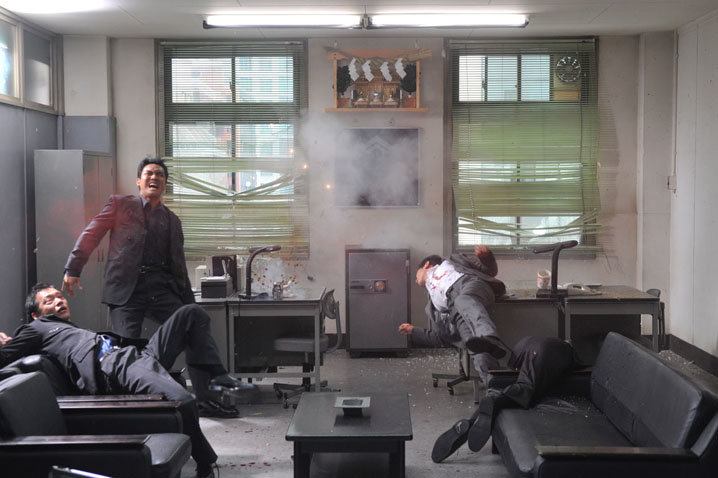 "As violent, amoral and misanthropic as a Jacobean play, Outrage is Takeshi Kitano's first yakuza flick since Brother (2000), and arguably his best film in a decade." And Maggie Lee makes that argument in the Hollywood Reporter: "Cleansed of his pretentious navel-gazing in recent years, it burst with the direct cinematic power of his early works (A Violent Cop, Sonatine), though his style is less minimalist and characters less taciturn. In fact, his representation of internecine gang rivalry and imploding power structure stands up to Kinji Fukasaku's seminal Battle Without Honor series in complexity and unsentimental attitude, with humor as mean and dry as a straight-up martini."

She may not find much company in Cannes. "People left the theater joining in that ancient query, 'Why in the hell did they select this film?'," reports Roger Ebert. "Kitano is a gifted Japanese director who has made many films I admire, but this must be his worst."

At the AV Club, Mike D'Angelo gives Outrage a C+ — "Emerging from a creative wilderness that involved a great deal of bizarre self-reflection — little-seen pictures like Takeshis' (2005) and Glory to the Filmmaker! (2007) rank among the weirdest movies ever made by a brand-name auteur — Kitano has apparently decided to see what happens if he strips his signature genre exercise of everything save for its most crowd-pleasing element, viz. abrupt, gory violence. To that end, Outrage introduces a convoluted, virtually incomprehensible plot involving various rival families, then proceeds to spend the better part of two hours annihilating its entire ensemble cast, one by one (with occasional group massacres)."

"The violence comes in several varieties — knife, gun, chopstick — and for a little while, it's mildly amusing to see the inventive ways Kitano can turn murder and assault into gags," writes Matt Noller at the House Next Door. "Before long, though, monotony sets in, and by the end, Outrage has regressed into a seemingly endless series of faceless yakuza getting gunned down one after the other. Which is, in its way, every bit as tedious as any half-assed art film."

"Kitano's script constitutes a series of double-crossings," notes the Boston Globe's Wesley Morris. "Before long, however, he's just Xeroxing past performances, in pursuit of fresh ideas for hurting people. He runs out of gas well before he runs out of bullets."

"Fast-forwarding into a war of succession that shakes the entire Tokyo crime world and spares no one, Kitano’s picture looks dangerously similar to an exploitation movie catering to a type of audience which doesn’t really care who was standing behind the camera," notes Dan Fainaru in Screen.

"[T]he violence seems an odd substitute for the irony and edgy attitude which made the early Kitano yakuza films like Violent Cop and Boiling Point so fresh and exciting," finds Facets Executive Director Milos Stehlik.

Brad Brevet: "In the press notes, Kitano says 'he [has] never and will never shoot violence as if it's some kind of action videogame.' His goal is for the audience to feel the pain and it's the one aspect of Outrage he nails."

"Not without some nasty laughs, but preening and mechanical," finds Guy Lodge at In Contention.

Update, 5/18: Todd Brown at Twitch: "Though not Kitano's strongest film — I personally give that title to Sonatine — it is clearly his best since Zatoichi and one which stands comfortably beside both Sonatine and Fireworks to create a trio of truly iconic international crime films."

Updates, 5/19: "Rumors have spread that the filmmaker was forced to make another yakuza actioner after his self-indulgent trilogy underperformed," writes Aaron Hillis in Moving Pictures Magazine, "and if all of this gore-splattered chaos is simply a middle finger raised at the studio that made the commercial demand, then maybe Kitano deserves more kudos for his uncompromising artistry."

Outrage "never transforms the material or takes it in new or exciting directions," finds Patrick Z McGavin. "For the first time, the results feel second hand and strangely bloodless."

Update, 5/25: This is "a film world the director clearly wants to take to the extreme, bury, and move on from," writes Daniel Kasman here in The Daily Notebook. "Outrage knows it is out to finish it all off."