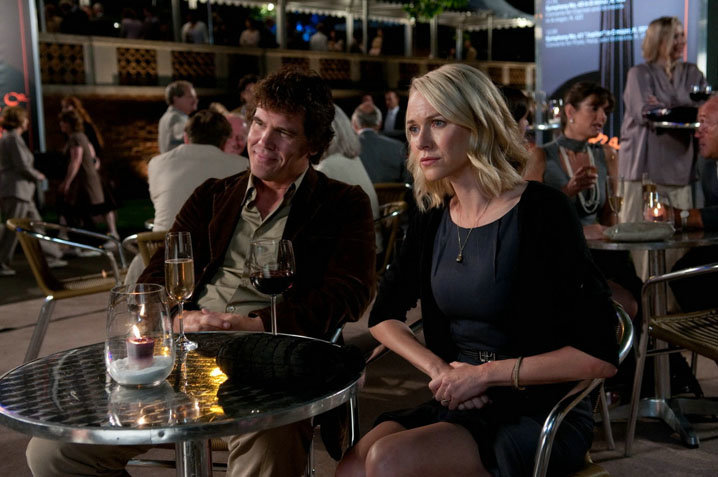 "Thirty-three years after Annie Hall," begins Julian Sancton for Vanity Fair, "Woody Allen is still riffing on the old joke he tells in the film's opening monologue, which leads him to his view on life, that it's 'full of loneliness and misery and suffering and unhappiness, and it's all over much too quickly.' Despite the buoyant jazz soundtrack and the unwavering comic energy, Allen's 42nd film, You Will Meet a Tall Dark Stranger, is perhaps the most somber film screening at Cannes. It's a throwback to his late 80s ensemble pieces, most akin to Hannah and Her Sisters."

"The title alludes to the overall theme that it may be wiser to place our faith in illusions rather than in a reality that inevitably proves disappointing, a theme that provides the film's funniest scenes in which Brolin's medic-turned-struggling writer argues with once-suicidal mother-in-law Jones, now conveniently convinced of reincarnation by clairvoyant Lucy Punch." Geoff Andrew in Time Out London: "Still, despite a handful of good scenes (there are another couple between Watts and [Antonio] Banderas), much of the film feels tired, and some of it rather crass."

The Hollywood Reporter's Kirk Honeycutt: "As a film from Allen's ongoing British/European period, where he spins out comic trifles or morality plays that drift seemingly free of national context, the comedy is more amusing than most, though it lacks the vibrant spirit of Vicky Cristina Barcelona. This is Woody in a bemused mood, devilishly complicating his characters' lives with follies and foibles of their own making until he ties each protagonist into a comic pretzel. Then he takes a tea break."

"Does Allen have a film in him about the mess of human relationships that isn't quite so artifically tidy?" wonders the Chicago Tribune's Michael Phillips.

"The film is notable, if that's the word, for being the first movie Allen has made in London that is every bit as bad as his most awful New York comedies, like Anything Else and Melinda and Melinda," writes Entertainment Weekly's Owen Gleiberman.

"It's sad to see a director who has made so many great movies end up dawdling in such dreary dreck," finds Charles Ealy at the Austin Movie Blog.

Though it doesn't relate specifically to Stranger, Rev Robert E Lauder's interview with Allen for Commonweal last month is no drive-by how-do-you-do.

Updates, 5/16: "Honestly, I wouldn't mind the meanness or moral bleakness of this movie if it had even half the wit, energy or eye for details of place and class found in his best New York films," writes Salon's Andrew O'Hehir. "It may be that Allen's famously rapid shoots and total non-interference with actors, formerly among his distinctive strengths, have become weaknesses: This picture feels like a working draft whose jokes don't click and whose pace desperately needs a shot of adrenaline."

On the other hand, the Observer's Jason Solomons finds this one to be "his most assured and sprightly work for many years."

For Anthony Kaufman, writing at IFC.com, "the movie suffers less from the stifling nature of some of Allen's late-career offerings, but You Will Meet a Tall Dark Stranger never amounts to anything more than a slight diversion loaded with well-worn Allen tropes."

"The movie is easy to take, and perceptive in men's desires for things they can't have," writes Time's Richard Corliss. "But Tall Dark Stranger, like Another Year, shows a top film artist in a holding pattern. For those who find this minor Woody, no need to fret long. He's already at work on his next film, and this time there will be a French connection. Among his stars is Carla Bruni, wife of French President Nicholas Sarkozy. That relationship should make for a piquant group photo on Cannes' red carpet next year."

Mike D'Angelo at the AV Club: "Only once, very late in the going, does Tall Dark Stranger threaten to generate something approaching real drama, as Watts, who's been happily enabling her dotty mother's reliance on a fortune teller (hence the title, though the 'tall dark stranger' also represents Death), discovers that the medium's fake pronouncements have squelched a hefty parental loan Watts needs to launch her own art gallery. But it's just a cute bit of Alanis-style irony, quickly rendered as forgettable as everything else."

"Most of the comedy comes from the older generation," writes Allan Hunter for Screen. "Hopkins has the role that Allen himself might have played and just occasionally slips into an echo of Allen's vocal delivery and mannerisms. He effectively captures the breezy enthusiasm of the born again Shepridge but also the underlying sadness of a man who finally acknowledges that perhaps he does have one foot in the grave and that the other foot is probably not far behind."

"Late-on," notes Todd McCarthy, "Allen throws in an insidious plot twist the likes of which he has occasionally used before, a reprehensible moral as well as legal crime that, knowing Allen, one isn't at all sure the character will be punished for or not. The transgression is quite novel, its trump card a nice little jolt."

"It's painless enough," finds Guy Lodge at In Contention, "but in a film that claims to have at least half a mind on the perils of aging and infidelity, a little pain mightn't have gone amiss."

Page at Cannes. Audio from the press conference.

Updates, 5/17: "Since the beginning of his career, Allen has always been an inconsistent filmmaker," writes Matt Noller at the House Next Door. "But it wasn't until fairly recently — just the last decade, really — that he became such a frequently lazy one."

"Adrien Brody is joining Woody Allen's all-star cast for Midnight in Paris, which begins shooting this summer in the French capital," reports Zorianna Kit for the Hollywood Reporter. "Owen Wilson, Marion Cotillard, Rachel McAdams, Kathy Bates and Michael Sheen are among those already cast in the romantic comedy, as is the first lady of France, Carla Bruni-Sarkozy."

"With each new movie Woody Allen directs, it grows increasingly clear that leaving New York was the best decision he made in ages," argues Eric Kohn at indieWIRE. "While not explicitly funny in every scene, Dark Stranger bears a shrewd backbone soaked in irony. It’s decent without being quintessential."

Update, 5/20: "The real wonder is why Allen bothers keeping up the prolific output when he doesn't have anything to say that he hasn't before," sighs Aaron Hillis in Moving Pictures Magazine. "You're still miserable, Woody; we get it."