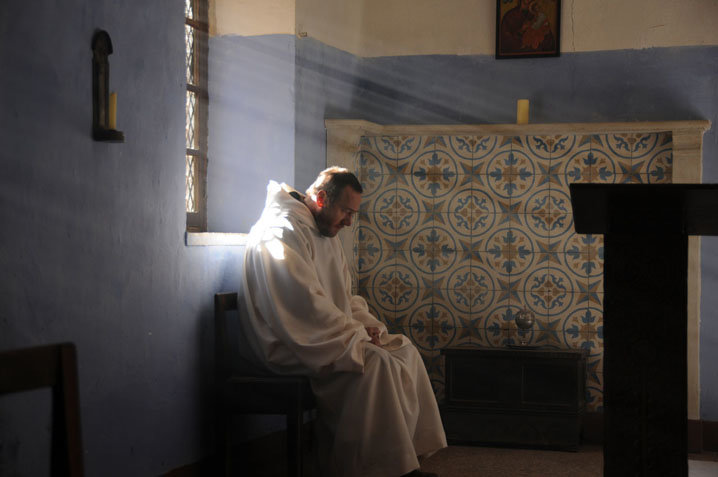 "One-time enfant terrible Xavier Beauvois has long been a respected presence on the French scene, making his name with dramas such as Don't Forget You're Going To Die (1995) and the police story Le Petit Lieutenant (2005)." Jonathan Romney in Screen: "With Of Gods and Men, his time for wider recognition has surely come, this thoughtful but urgent piece showing that Beauvois has matured into a masterly director with tight, calm control of his material."

"'Dying for my faith shouldn't keep me up nights,' says a Cistercian monk to his rational leader Christian (Lambert Wilson), just two of the eight robed Frenchmen whose monastery sits high in the North African mountains, circa the late 1990s." Aaron Hillis in Moving Images Magazine: "Loosely based on the Tibhirine tragedy, in which a brotherhood of monks in Algeria were kidnapped and slaughtered by Islamic fundamentalists in opposition of the government, [the film] attempts to put audiences in the sandals of those impoverished martyrs during their final weeks.... Of Gods and Men is overly pious and not much else, offering neither meaty wisdoms about being men of peace in a violent terrain nor the sensual, palpable pleasures of such a life that the Trappist-monk doc Into Great Silence evoked."

For Matt Noller, writing at the House Next Door, the film "is, no more and no less, a handsomely mounted French prestige picture. Never less than perfectly competent, it's still somber and respectful to a fault: the Cannes equivalent of Oscar bait."

"No one presents any real argument for leaving," writes the Hollywood Reporter's Kirk Honeycutt. "Nor does any one present any real reason to stay. What is gained by their deaths, for them or for the church? Will it do any good for the local community they profess to honor and serve? Does God even figure in the decisions? They say He does but how are they so sure? There are eight individual decisions to be made here, yet Beauvois never humanizes any of his monks. The film instead consumes itself with songs, communal prayers and nightly meals."

But Fabien Lemercier, writing at Cineuropa, sees it differently: "The eight monks each react in their own way, some coming close to a vocation crisis, others assuming their commitment." Roll the clip:

Lemercier: "Of Gods and Men comes close to perfection, but is marred by some overlong passages and above all by an ending that delivers a questionable version of events (the monks are killed by the Islamists, whereas in reality the possibility of a military blunder has certainly not been ruled out), while the magnificent dinner scene that precedes it, accompanied by Tchaikovsky's Swan Lake, would have made an ideal ending."

"Beauvois doesn't linger too long in over explaining just how the Christian and Muslims have come to live in harmony with one another but instead lets quietly rendered moments reveal everything that we need to know," writes Kevin Jagernauth at the Playlist. "While there is some chest thumping on behalf of the local Muslim elders saying that terrorists don't know the Koran and don't represent the Muslim religion, these sorts of obvious messages are largely left to play out on their own."

The grades are high at Letras de Cine.

Updates: "It is the most intensely passionate film at Cannes so far this year, and the fact that the passion is religious makes it no less moving," writes Kate Muir for the London Times.

At the AV Club, Mike D'Angelo disagrees: "Of Gods & Men never sets a foot wrong, but neither does it challenge the viewer to feel anything but passive admiration — it's the sort of thoroughly upright docudrama that people hail to the skies but then quickly forget."

Updates, 5/21: "Part of what distinguishes Of Gods and Men is its intelligence and topicality, its inquiry into questions of faith and fear," writes Manohla Dargis in the New York Times. "But much of its pleasure derives from its attention to the monks' liturgical rituals, quotidian habits and manifestly deep love for one another and the world around them."

Update, 5/22: Of Gods and Men has won the Ecumenical Jury Prize.