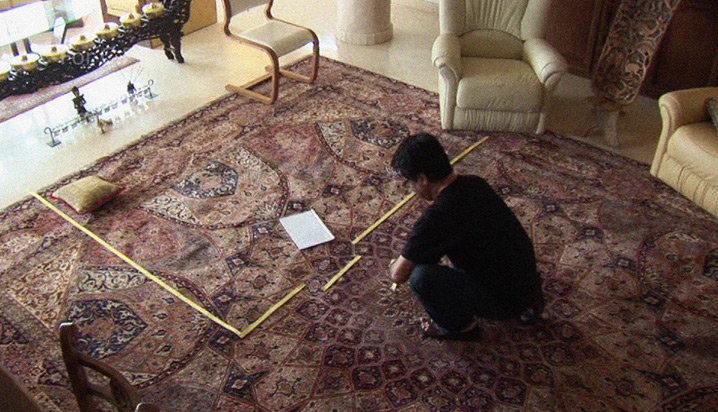 Cannes competition experiments with Venice-style genre programming with Nicholas Winding Refn’s tight thriller, Drive.  A small story and a small production are offset by the ‘scope frame’s extensive, vibrant use negative space, big empty swathes of the screen used for popping shapes of color and light. There is more negative space then there are characters in the film, and this piercing anti-content re-invests the blank fatalism of  Drive’s few people with a further emptiness, as if their vacant stares project out of their eyes pure, vacuous graphic abstractions.

A mostly silent Ryan Gosling plays a taciturn driving expert—he works as a mechanic, stunt car driver, and a part time driver for heists—who falls, in a minimally emoting way (twists of a smile, unusual amounts of staring attention), for his cute neighbor (Casey Mulligan) before becoming inevitably entwined in her husband’s shady background, requiring our man of restraint to become a man of violence.

But onward from the conventions—L.A.’s suburban clutter replaces the volcanic, empty Nordic landscapes of Winding Refn’s Valhalla Rising, but the same social, human, and political emptiness of that imagistically stunning digital film is retained in this new setting by those who move through it.  No film I’ve seen in Cannes has used color or the widescreen as well, the latter calling back to the sharp craft of Japanese studio genre masters of the 1960s, finding flares and geometries that please and complete (or incomplete) the cinema frame.  But, in Drive, to what purpose other than to carve with precision fat free comic book imagery? The film has a neo-Melvillean quality in its restrained acting, its uncompromising people-just-doing-their-job, its mise-en-scène dragged out of the soul of its hero.  But it is also evacuated of the forces that drive Jean-Pierre’s lonely criminals, and what is dragged out of Drive’s soul is a near sublime absence.  The film is clearly inspired by silent, lonely driving through the nocturnal streets of Los Angeles—making it a strong double feature with Michael Mann’s Collateral—only this driving state of mind is that of a sociopath whose physical beauty and predictable restraint (and later, lack of it) are matching analogs to the film’s pure, beautifully controlled surface. The zen calm of this night cruise is the calm of the soulless.

Each year in Cannes I discover something truly fantastic in the always small and usually unsurprising Cannes Classics retrospective sidebar.  This year was the early talkie what's-it Niemandsland (No Man’s Land), a marvelous creation, part film essay part dramatic fable about World War I, made in 1931.

The first half sets up five characters—one Englishman, one Frenchman, one German, one Jew, one “Negro”—living their pre-war life in a geography-spanning montage anecdotally and of course allegorically establishing what they do and who they hold dear—new babies, new wives, camaraderie, stardom—at the same time giving some flavor of their cities, their surroundings. Some of their lives are dramatized: the loveliest and most human scene being a tram car pick-up in Paris which carries all the early 20th century modern city charm and dizzying location work (shot on a moving tram, and showing action inside the car and out) of the contemporaneous People on Sunday.

Much of this first section is a highly mobile, drama-free collage of images representing peace time and its transition into enlistment.  The early reverie does not last long; on comes war: various national flags are waved and hats of nations throw up, bamboo umbrellas in Japan, top hats in England, berets in France.  All five men are impacted differently—my favorite of the bunch is the German who, after being drafted, joins a crowd marching on the street, walking arm in arm with his sorrowful wife, who, as the march (and shot) continues forward, gradually feels the beat of the drum, the enthusiasm surrounding her.  Her smile grows, she holds her husband tighter.

The film uses its early sound with clever aplomb—only the film’s second half, set, predictably, in a battlefield crater where all five combatants find themselves waking from a daze, features direct sound, but the rest of the film is a creative montage of audio much in the manner of Dziga Vertov’s Enthusiasm.  This second half threatens pacifist, idealized corn but never succumbs.  It grants the “negro,” amazingly, the ability to speak five languages, and as the five linger in their international pit of war this second act muddy kammerspiel becomes a wonderful panoply of languages heard and not understand, of translations, song, food, pensiveness. The finale is endlessly optimistic and endlessly pessimistic at once, stepping back from the human drama of the five and returning the movie back to its first mode of address as a film essay, less a melodramatic story than a moving, poetic view of the fragmentation and unity engendered by nationality and by nationality’s progeny, war.

The film of the festival of 2011, This Is Not a Film, was reported to be smuggled to the Croisette via a cake from Iran.  The humble, ingenious origins are fitting for this sweetly sad video diary created in a collaboration between repressed and imprisoned Iranian auteur Jafar Panahi and director Mojtaba Mirtahmasb﻿, and it meditates with touching simplicity on the very nature of filmmaking (which Panahi is currently banned from, for 20 years) and on Panahi’s isolated existence in Tehran.

Folding in on itself repeatedly, the film begins as a self-shot video of Panahi staging speakerphone conversations with friends and lawyers about his current situation—created, in rough estimate, in February 2011.  But he quickly sees through his own acting—an evaluation not as the director of the film but as an actor acting in it, acting falsely.  In steps Mirtahmasb﻿﻿ who helps Panahi conceptualize a different way of visualizing his house arrest and inability to film—namely, to movingly evoke his last officially rejected screenplay by re-staging it and reading it in his living room.  Panahi remarks that while he may not be able to direct films no one is stopping him from acting in them or reading screenplays.  And, to prove a greater point, the filmmaker takes out distressingly weathered looking DVDs of his own films (from a shelf whose only visible title is Ryan Reynold’s Buried) and shows how in one scene an actor dictated the film’s direction, in another how the space dictated the actor’s acting, and in a scene from The Mirror how the response of an actor changed the entire production.  In short, Panahi, with a humble admission behind which is a baffled desperation, proves that everyone involved on a film set is making a film, that all are complicit and are creative, all directors in their own right.

Explaining his blocking and direction on his "film set" of tape placed on his living room carpets, Panahi gets repeatedly choked up, and whether his emotion is being felt as a director unable to direct an actor who is not there or as an actor unable to direct a filmmaker who has been banned is an ambiguity that pierces through the film straight to its heart.  The idea is simply, truly, that what is behind the camera directs as much as what is in front of the camera.  In this film, Panahi is not allowed to direct, but he acts, and the set is his home, and his home is in Iran, and all these things direct the ideas, the feel, the expression of the film.

The re-enactment of the script stutters because of Panahi’s doubts and his emotions, not to mention his and Mirtahmasb﻿﻿'s masterful touch that knows when to step back from this gracefully forlorn one man production of domestic imprisonment and provide a little humor or breathing room.  Most of the outside world is evoked in absences, phone calls and unseen women (who they are unable to shoot because the majority of the movie takes place indoors), fireworks popping like gunshots outside, a yipping dog.  Inside the apartment, there is only the actor (Panahi), the director (Mirtahmasb﻿﻿), the cameras and a beautiful, friendly iguana that crawls around Panahi like a cat moving in slow motion and, in the film’s most tremendous shot, sneaks behind a book case and starts to climb it from behind in some kind of strange, surreal domestic allusion to where such subversive art as This Is Not a Film exists, where its filmmakers reside, how they and their art moves in the world.

The final portion of the film absorbs Mirtahmasb﻿﻿'s documentary into Panahi's fiction, with Panahi taking up the camera again himself—notably after trading, back and forth, short and reverse shots with his co-director from HD video to iPhone, the observer becoming the observed, the prisoner the filmmaker, and vice versa—he takes it up and leaves his apartment for a sequence as funny as it is unsettling as he chats with his building’s mysterious temporary janitor in an elevator that is going down, all the time getting closer to the explosions popping outside.

Those sounds, beginning early in the film, initially seem like gunshots, but a later news report re-contextualizes them as fireworks from an illegal anniversary of a protest.  Is it a celebration outside or a warzone?  The sounds, the explanations, and even eventually the vision—Panahi and the film leaving the interior as much as they possibly can, and still remaining behind iron bars of the building's compound—is left to an ambiguous imagination.  And that, perhaps, is the ultimate state this wonderful artist tragically resides in—uncertainty.  And his and Mirtahmasb﻿﻿'s film, using the barest means but inspired by their art, their passion, and their existence in the world, have crafted one of cinema’s rare masterpieces of truth.