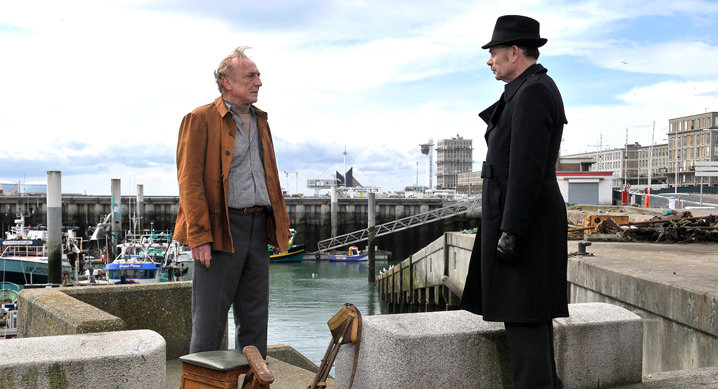 I think my favorite thing in Le Havre, Aki Kaurismäki's blend of fable-style plotting, classical studio storytelling, and a real world context and social message, has little to do with this unusual mix of several usual kinds of films.  It is, instead, lead actor’s André Wilms voice, the tenor of his line readings; a hilarious and moving collaboration between Wilms and Kaurismäki's direction, lending his spoken words a clipped, positive upward inflection in his sentences that gives the ends of lines a quality of affirmation, an enthusiastic aphorism, the punch line to a joke.  My favorite instance of this is when Wilms is visiting his wife (Kati Outinen) in the hospital.  He brings red flowers and she remarks that the moment she leaves the house he starts spending money.  He counters, saying they were cheap, pauses, and then rushes through “Who am I kidding? They were the most expensive.”  The line is perfectly written, but it is Wilm's deadpan plucky tone in the admission, the gesture, and the romance, that got me, made the romance a joke and the joke romantic.

A veteran stranded in Directors’ Fortnight amongst greenhorns, André Téchiné surprises with the most digital of films yet seen in Cannes, Impardonnables. That’s praise indeed: Téchiné , working with cinematographer Julien Hirsch, uses digital as obviously digital, not a film stand-in—we get saturated, flat compositions, painterly rather than spatially deep, and always impressing on the images and the characters staged in front of them that they are inseparable from the film’s precise Venetian locations.  Waterways careen around in the background of the frame, colors are pastel blobs, with rough, pixelated textures to the faces, skin, and clothing.

The story moves from Venice to an island outside the main city, and from this vantage point pivots in space so that the rest of the story requires boats, helicopters, trucks and foot travel to get to and from the rest of the world.  A writer with a fractured family life holes up on the island to finish a book and spontaneously invites his beautiful realtor, thirty years younger, to live with him.  Cut to a year later: writers block and suspicion of infidelity.  Thus: binoculars and friends and youths hired to keep track of people, genre brought in via detectives, a missing daughter, runaway Venetian aristocrats.  Yet like the coming and going boats, the darker genre elements propelling the plot always come back around, spawning from and returning to the film's center of unhealed family dynamics and romantic relationships as difficult as that of parents and sibling.  And each and every one is as much in agitation as the beautiful, unsteady digital imagery, just as incomplete, in question, in the midst of instability.