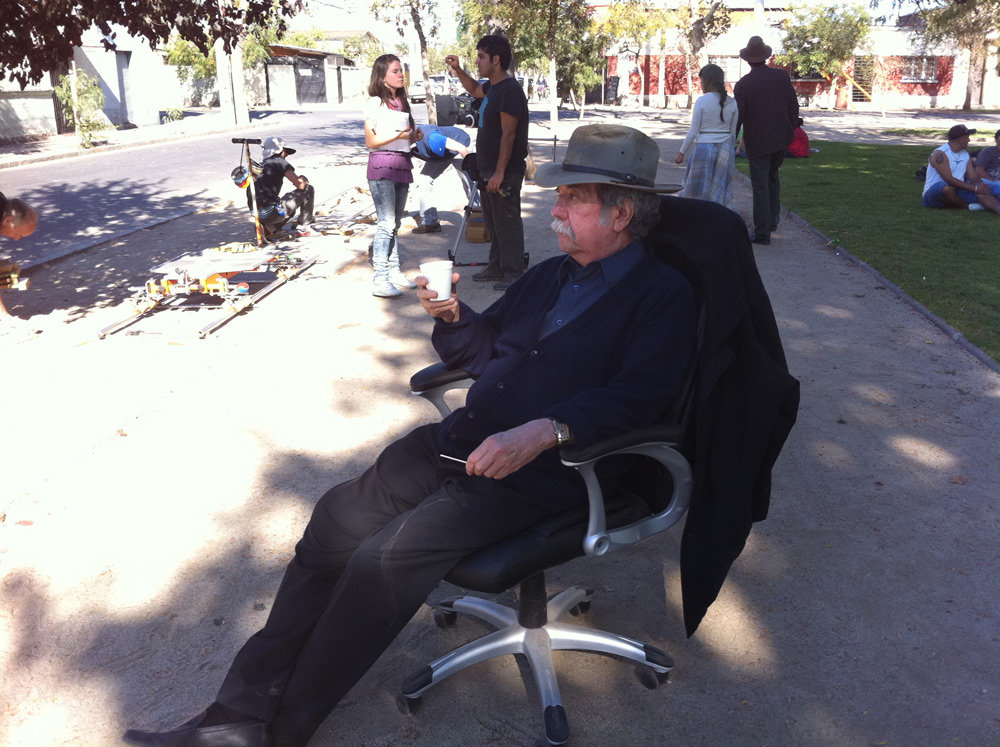 Sometimes I think Raúl Ruiz purposefully makes in-between-masterpieces, inconsistent but immensely interesting films﻿ engrossed in both the details and the big picture of elaborating with variations and digressions books, histories, myths and the director's own films; that masterpieces are a calculated anomaly, unusually vivid and vivacious crescendos of the on-going dream that is the master's body of work.

La Noche de enfrente, presented in the Directors' Fortnight, is said to be Ruiz's last film, but I have a suspicion that more dreams will show up unexpectedly, like Bolaño novels. Coming after Ruiz's popular triumph Mysteries of Lisbon this new work may be bound for disappointment, as it resembles so many of the director's films of the 2000s that seem to exist as part of an elongated continuum of recollections, farces, reveries and skewed realities instead of works of punctuation, unexpectedly shouting out. (Mysteries inadvertently seems to be punctuated, like Mulholland Dr., as a kind of accessible encapsulation of an auteur's interests and appeal.)

Then again, Ruiz's films have always seemed of a piece, one long tracking shot through rooms within rooms, each room a film or a possible film. Maybe it's these 2000s films that seem, like much of later Rivette, to linger in spacious, well-lit interiors letting their actors convince themselves and us that they are (or think they are) in a normal story. In fact, Ruiz's actors exist as fluid, mobile figures who transmute and reform themselves, collapse into beings as thin as paper or rearing up as irrepressible presences in a film, these even going so far as to show up in different guises, absorbed into and then returning from the mise-en-scène﻿. The consistent sense is of movement, even if lugubrious, viscously dreamy, a camera passing around a space, one image leading mysteriously to another. One of the most startling sequences in La Noche, which is one of Ruiz's infrequent Chilean productions, has its actors taking a stroll around the city with the camera tracking along next to them. Only, the tracking shot is faked—the actors are walking in front of a greenscreen showing this moving shot, they are actually on what must be a treadmill, walking in place, and, hilariously and almost imperceptibly, walking slower than the camera's “movement” through the city suggests.

Shot digitally, like Mysteries, the film presents a flattening of worlds, that of the characters' actions, the actors' existence, a beautiful record of a passing city, all has been made one single, flat image, legible but uncanny, at once united and discreet, times and places, fictions and reality pressed unto inextricably in the pixels. The film itself is quintessential Ruiz, and it will be, and I suppose must be said, a thematically “appropriate” final film—an old man, becoming increasingly distracted at work and prone to visions of his youth, is forced into retirement and, later, his own death. Though how could this be a picture of Ruiz? The director is probably still working beyond the grave. (In a moving and bizarre introduction, one of the film's producers claimed to have called Ruiz before the screening and took dictation of the filmmaker's remarks.)

A strong political element in La Noche is lost on me not recognizing several eras in Chilean history; I believe the film takes place around 1970 but the near total integration of scenes of the man's youth with the supposed present muddy the costumes and personages so really someone in the “now” could be a vision of the past and viceversa. Fantastic stories of his youth—an obsession with Beethoven, who the man as a child escorts to a local cinema, a cinema projecting pixelated scenes from DVDs, long conversations with Long John Silver, the mystery of the possible deaths of his entire family—blend with his present, a secretary in love with him who may in fact be loving him in a different era, his boarding house containing characters who, later, appear as the dead family of his youth. Through it all he is stalked by retirement and death, but in a lucidly oneric calmness, as he clearly is already living the world as a place where boundaries like death, the past, or the imagination are not just permeable but whose undefinable but unignorable artifice is a defining aspect of human life.

Thus when they said this was Ruiz's last film, and when, after the credits are nearly done, you realize you're hearing the sound of a take after the action is completed, and finally the director's voice sharply says “cut,” I don't believe at all that this is the end for Ruiz. Even now, while I write this, down in the Cannes Market, there is a poster advertising a little something called The Lines of Wellington...﻿