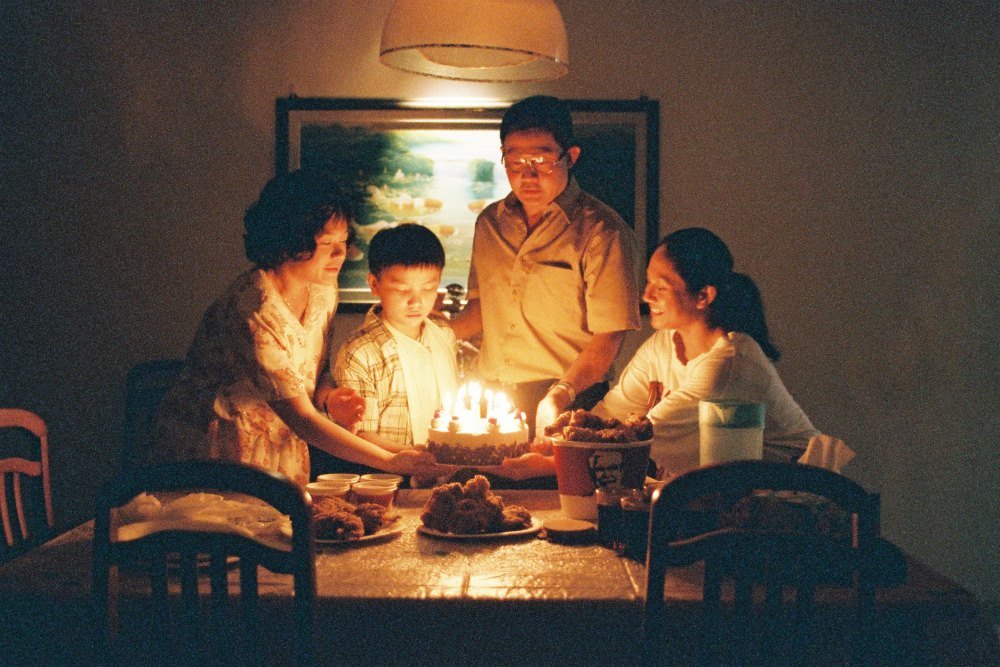 Set in Singapore on the verge of the Asian crisis of 1997, Anthony Chen's first feature starts with a blurred shot: the back of a young boy doing something noisy and strange in front of a window. It works as a metaphor of what the film will tell: blurred reality, blurred futures, blurred conscience of the world in a young boy's mind before affection will make him grow up.

In young Jiale's middle-class family, Dad is a not too successful sales executive and Mom is a public officer, and she's expecting her second child. This is why she insists on hiring a maid. And since it is how the market goes, the maid will be Filipino. Teresa arrives in the family's small flat: not talkative, a good Catholic, keeping much to herself but frequently listening to music from home on her Walkman. Jiale bluntly rejects her, in the tradition of Chinese first born male tyranny. To the spectator's great satisfaction, Teresa reveals herself as a witty, strong-tempered woman who does not hesitate to firmly scold the brat. But while the relationships between Teresa and Jiale grow to affection and complicity, the family situation worsens. The financial crises eats up the family securities, the father loses his job and secretly takes on a night watchman position, the mother fears losing her own job and gives in to the local Dianetics-like phonies ("Hope is within yourself!"). Teresa secretly takes another job to make for the even more difficult situation of her family back home. Young Jiale alone seem happy to have found in Teresa the companion he needed, sparking off his mother's jealousy. The economics put a brutal end to Jiale and Teresa's friendship: the family has to send her home. Nothing is blurred anymore. Things are all too clear: inaccessible powers have made ordinary people pay for charlatan like speculations. The poorer they are the more they pay.

To tell his story of a not so far away past that says a lot about the present, Anthony Chen has chosen to focus on characters with a very welcome sense of "democracy." As Renoir's motto went: "Everyone has his own reasons." The father looks weak? He has the bravery to accept any job that comes. The mother nags more than the average? Despair and anxiety lead her to well-intentioned illusions. Jiale behaves like a brat? He dreams to cherish and protect someone.

In a time when "vintage" has affected so many productions, making most look like trendy antique shops on screen, Anthony Chen's reconstruction of the late 90s, thanks to his sense of colors, locations and faces, feels like a heartfelt, lived-through vision. Just as memory works: not as a catalog of objects but as a mix of images, sounds, words and details. Not easy to achieve in a place like Singapore where changes are lightning quick. Chen's direction mixes with great sensitivity his British NTFS experience and a most probable affection for Edward Yang's films, if not for Cantonese melodrama of the 50s. His commitment to real life and to characters make the episodes of the story unfold with a bittersweet naturel that never seem predictable nor forced.

In 2005, another Singapore director told the story of a Filipino maid in a middle-class family with one son. Kelvin Tong's The Maid was a horror film with a social touch. In Tong's film, the Filipino maid was a victim of a middle-class Chinese family's horrific plan during the "Ghost Month," when spirits and hungry ghosts come out from the lower realm. Anthony Chen's family also meets with the hungry ghosts that came to haunt Asian societies. Teresa has known them for ever. Anthony Chen, as well as young Jiale, wants her favorite song to be listened to and remembered.﻿