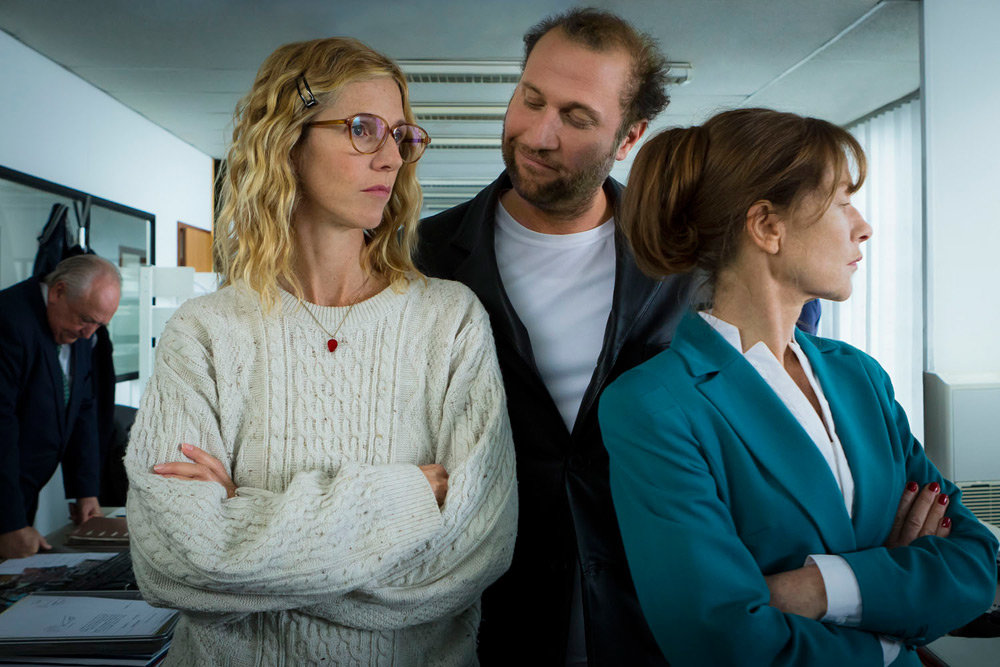 After a wait of 6 years, Serge Bozon has followed up his expansive and beautiful La France with a far more modestly scaled what's-it: Tip Top, a pseudo-detective film at once burlesque and jabbing, adapted from one of a series of novels by Welsh author Bill James. It overlaps not just genres (crime, comedy) but production "genres" or types; in the sense that a minimalist Rotterdam arthouse movie is a "festival film," Tip Top feels both a distinctly auteurist film from Bozon, and a strange lower-middle range product of Euro-financing (France, Luxembourg, Belgium) involving a certain specific combination of border-crossing actors, regional locations, and a deadpan, glammed up smalltown modesty. It makes for variegated﻿ film texture combining the poetic and the mundane, complicated considerably by an unabashedly ethno-political context.

The crime investigated by internal affairs detectives Isabelle Huppert and Sandrine Kiberlain, that of the death of an Algerian police informant, occurs in a small city, and the film tells a story paradoxically small in nature but extensively plotted. Nondescript locations and crime genre conventions subsumed by an emphasis on quirky, character-based humor undercut the specificity of the city, and the story is leisurely distracted by the quality of things over events, a constant repelling of direct engagement in favor of anecdote. Tip Top bobbles uneasily in some half-defined middle ground between things. (It comes back to me that Bozon talked extensively of the influence of Tourneur on the mise en scène of La France.)

The movie is very funny, Huppert's explosiveness (her character is intensely into S&M and “protocol”), and particularly the endless grimacing and cavorting nuance of François Damiens (as a local detective too bulky for his tight leather jacket) who is admirably willing, in the opening scene of the film and its best, to spout racist diatribes in a local Arab bar to save the face and guise of an Algerian informant. The presence of Algeria and Algerians runs through nearly every scene of Tip Top, from this absurdly hyper-racist opening heckling (“Arab Spring is a spring for faggots!”), to seemingly every white character paired to an Arab, whether it's Huppert's husband, the detectives' informants, or an eerie and melancholy series of shot/reverse-shots pairing a local captain of the police with television footage of Algerian riots. The film is a veritable nest of conceptually off-kilter relationships between various elements of the police force and the local Algerian population, schematically delineated by Bozon, and likewise filmically presented in an often trite emphasis on Kaurismäki-Sundance presentational quirk, but just as often offset by the very oddness of these pairings presented in this style.

The aim of the humor seems so calculated, yet what is added to on screen, block by block—as the film has an effect of staccato decoupage and sequencing—is a bizarreness whose tone has little in common with the overriding sense of humor. Something seems subtly off, odd, and unidentifiable, as if this kind of movie, made this way, set in this kind of place, with this kind of story, is trespassing somewhere it shouldn't, provoking new channels through which something strange can flood in. The nearest aesthetic equivalent in Tip Top are the luminous, crepuscular scenes taking place at night but clearly photographed at dusk, with a mild, lunar spotlight isolating the actors out of the blue-black background. Something clear and tangible—yes, night—but consciously uncanny, provoking and beautiful. These are mere interludes in the uneasy expansiveness of such a small film and contained production, but they are direct, albeit more abstract, expressions of something traveling like an undercurrent throughout.﻿