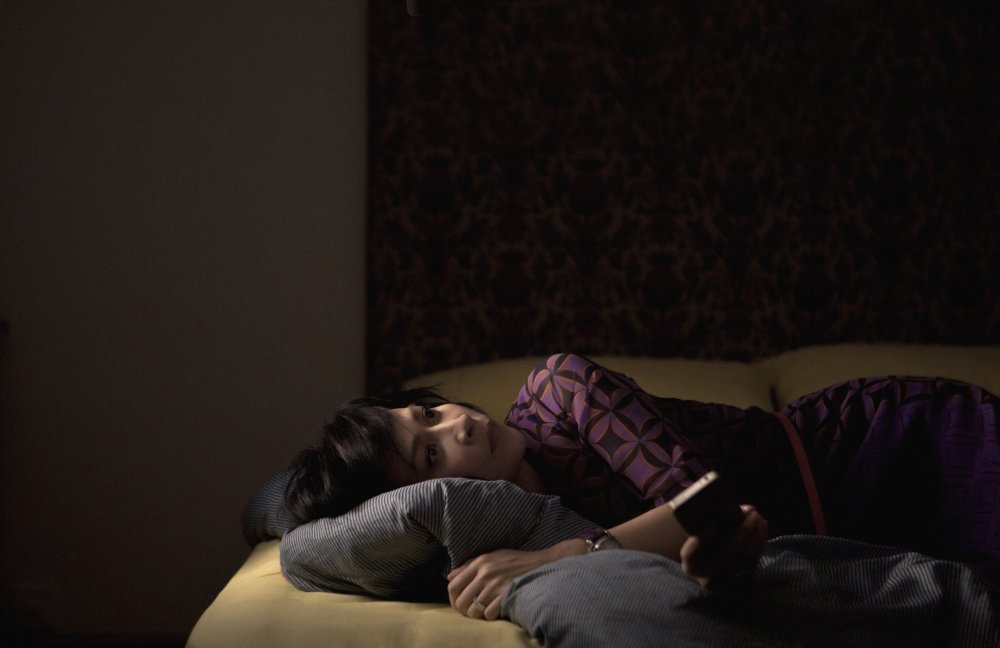 Above: Carina Lau in Bends.

The narrative potential of the "driver-boss" couple has been used many times either to describe class relationships and conflicts or to redesign the part of the "commenting choir" by placing it behind the hero. In Flora Lau's first film, the relationships between Anna Lau (Carina Lau) and her chauffeur Ah Hui (Chen Kun) materialize social differences, but the story puts this classical pattern in motion through a third term: a border.

Anna lives in Hong Kong, the wife of a wealthy businessman, only busy with her socialite circles, as goes with the status. Ah Hui is a Hong Kong citizen but his wife is from Shenzhen in the Canton province, a mere 18 kilometers from Hong Kong. She is expecting a second child, and all of Ah Hui efforts are about making her give birth in HK, on the "other side."

One night, Anna's husband disappears. She is soon faced with the necessity to keep up appearances and to deal with money issues. The Mercedes where the two main characters "meet" is to her the last principle sign of her fading status. To Ah Hui, the car is a job, a possible source of money (through the lucrative replacement of mechanical parts with fake ones), and maybe an ultimate solution. Money has become a key concern to both Anna and Ah Hui, each one of them not knowing what the other is going after. Anna needs money to go on with her lifestyle and not lose face, a "face" that she has probably conquered and defended at the price of real happiness. Ah Hui needs money because having a second child outside of Hong Kong's "special status territory" means paying a heavy fine that the family cannot afford.

As the story unfolds, tension grows for the two main characters yet social differences do not vanish. In Flora Lau's script, there is no room for any good-hearted "sunny side of the road" solution to what is at stake. Money divides social groups as it divides a whole country. Rich and poor are separated by a border as harsh as the one that separates Hong Kong from the rest of China. While Ah Hui struggles to explore all the possible ways to cross the geographical / financial border, Anna goes into various "magical thinking" illusions of changing her reality, from Buddhist good deeds to Feng-shui. The parallels, as embodied by the script and the editing, are bound never to meet.

Carina Lau's restrained acting conveys beautifully Anna's inner torment and growing conscience of the hollowness of her life, with a constant elegance that the film eventually transforms into a possible moral quality. She is a perfect match to the "low key" choices of the director, since the film manages to convey its critical comment without ever giving in to melodramatic twists nor demonstrative developments. Flora Lau's direction is about saying as much as possible through limited but chiseled dialog, through expressive notations and secondary characters (like Anna's mother in a short yet heart-breaking scene). Careful location choices and a sharp sense of space as well as Christopher Doyle's sensitive images provide the right frame to the story: from upper class apartments, shops and tea-houses to urban landscapes that give the impression of an endless metropolis, Hong Kong and Shenzhen appear like one. The story shows how deep the real differences go.﻿