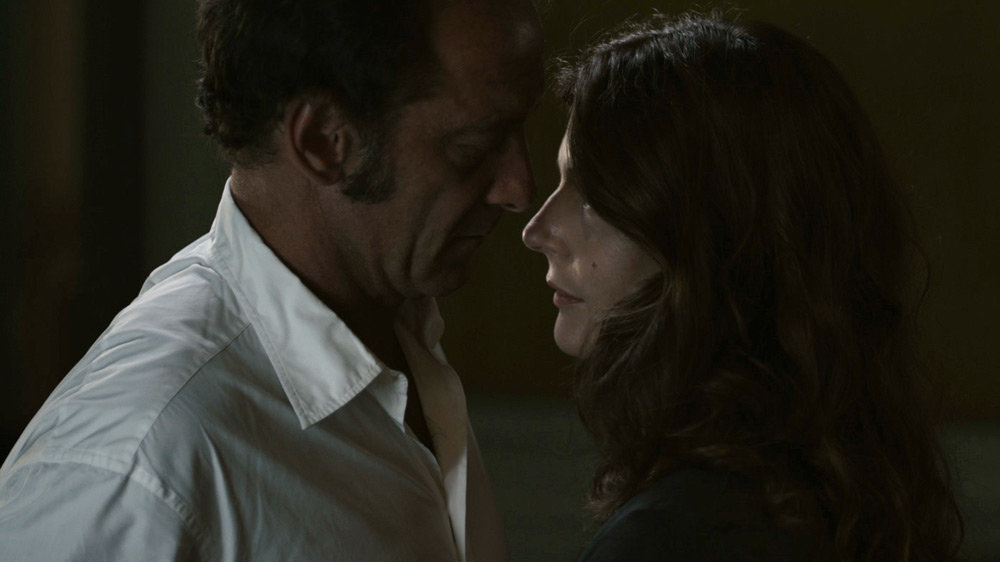 Bastards [Les salauds] begins, like Garrel's A Burning Hot Summer, at night, with a suicide. An explanation for the gesture will never come, although, through the film's near imperceptible ellipses, it comes close. A film of profoundly somber gloam, of loneliness and anger and even stifled madness, of complicity and solitude, its sadness is almost absolute.

A torrid string connects a cast predominantly made up from Claire Denis' family of actors: Vincent Lindon, Michel Subor, Alex Descas, Grégoire Colin. There are so many of them that they stand out as coming from somewhere before, some shared place, and their figures seem at once human and also something more so, grander, archetypal. (Lola Créton creates a similar effect in a small role with such a brief but so recognizable presence that it both reaches outside the story, as well as expanding something within.) The string begins at the suicide and touches the two families involved, one, that of the deceased, is dissolved, and fraught with despair and separation. Lindon is a ship's captain, divorced, returning to deal with the death of his brother-in-law and the bankruptcy of his sister's company. The other, a wealthy family headed by Subor, who lives with his mistress, the lone and much younger Chiara Mastroianni, is intact, powerful and seductive. Already intertwined before the film begins, the opening's nocturnal, rain-scored suicide reveals the mysterious connection between the two and plunges them into darkness.

With Claire Denis' enigmatic unfolding of only bare details of histories—familial, economic, sexual, existential—Bastards continually moves half a pace ahead of the encroaching penumbra. One has to keep guessing, furtively, amidst the intense sensuality, the ashen color palette (it is the director's first digital feature), the restrained passions and intimations of both exploitation and revenge. The figures all orbit one another in cryptic relation, but Lindon's burly figure is the center, and, like Joseph Conrad's Axel Heyst of Victory, is a self-isolated man who makes the profound decision to re-join humanity, and thereby inevitably leaves a horrible mark upon it. (One of the sophistications of the film's story, unlike that of Victory, is the suggestion that he damns his family and fellow man one way through solitude, and another way through participation.) He seduces Mastroianni in a series of tender love scenes at Bastard's heart that build a bridge between the pulsing fatal momentum infused in the film, and the traces of goodness, of commiserating spirits and bodies, that can be found in their ambiguous relationship.

It is another small film from Denis, as befits its Paris setting, a retreat from the sprawl of White Material, but brings back from that film the violence and primal darkness of its climatic night, finding it lain across a more modern but everyday world, with terrifying results. Ending with startling sharpness as all Claire Denis films do, Bastards is well named indeed as the closing credits follow only a further descent into startling disgust, opening to reveal a pit of pixels that will take a long time to forget.﻿