THE LAST OF THE UNJUST (CLAUDE LANZMANN, FRANCE/AUSTRIA)
OUT OF COMPETITION 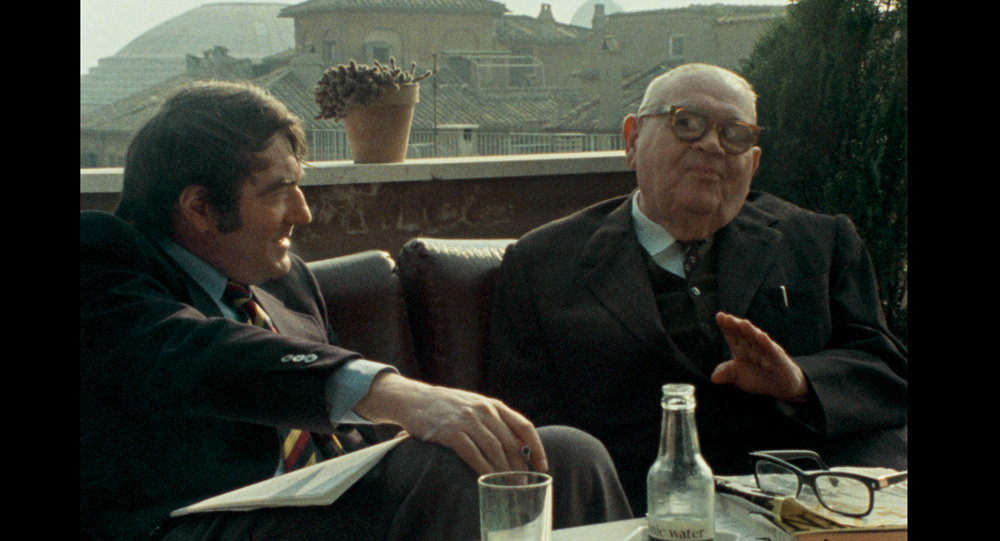 Above: Lanzmann and Murmelstein in Rome, 1975.

Claude Lanzmann has brought to Cannes a new film whose heart is the interview footage shot for the Shoah project of Austrian Benjamin Murmelstein, the so-called last (and as of the 1975, the only surviving) of the Jewish Elders, those nominally in charge of the Nazis' Jewish ghettos. Filming Murmelstein in exile in Rome in 1975, Lanzmann pulls from the man some consider a Nazi collaborator and some consider a hero long and anecdotal recollections of his experiences working with Eichmann, the various logistical organizational concerns of his pre-war emigration efforts for Jews in Vienna, and his wartime years first as an administrator in the Czechoslovakian “model ghetto” of Theresienstadt﻿ and later as its Jewish leader, or "Elder of the Jews."

This old interview is intercut, in a variation on Shoah's structure, with Lanzmann's visits to the locations featured in Murmelstein's narration and the history surrounding it: the town today, earlier site experiments of similar sui generis ghetto villages (including a wild reference to Poland's mid-30s idea to send its Jews to settle in Madagascar), train stations, and grounds for execution. The 70s footage, shot on 16mm film by the now-deceased William Lubtchansky, features a middle aged Lanzmann interviewing and, as often happens in Shoah, goading or pestering his interview subject; the locational footage is newly shot by Caroline Champetier on 35mm in 2012, featuring a precariously old but vocally vigorous and adamant Lanzmann. Time thereby telescopes outward with the storytelling: Murmelstein in the 70s recalling the 30s and 40s, and Lanzmann in the 2010s recalling both his original interview and, behind it, what remains of a factual record, often recited or retold by the aging director on the site of its occurrence, a record of contemporary topography, absences and transmissions of history. 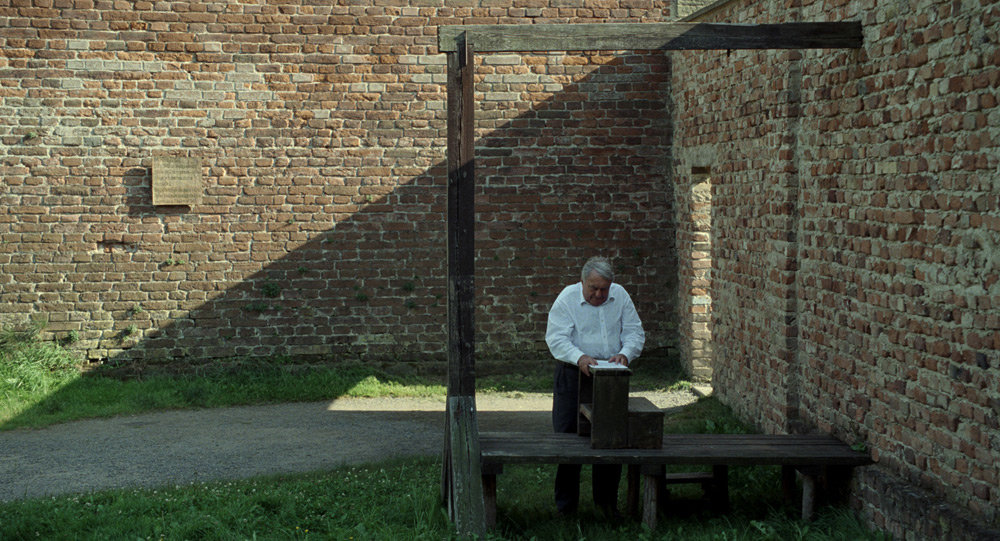 Above: Lanzmann at an execution ground near Theresienstadt, 2012.

With this back and forth in time and telling, narration becomes a clear subject of The Last of the Unjust. The film features the only real before-camera interview of the publicity-shy Murmelstein, whose unusual existence as the sole surviving member of a specific class of Holocaust victim and participant makes his testimony as necessary as it is precarious, and his storytelling and explanation is couched in interpretation and the unverifiable. Theresienstadt is held allegorically if not metonymically as part of the Elder's existence: a farcical “show” town, just as his position as a leader was similarly a hollowed surface, with his work guaranteeing the ghetto's survival as well as his own. It's not until the last third of the film, after incredible tales of the number of Jews he was able to get out of Nazi German, and the ingenious ways this was arranged, that the controversial and severe policies Murmelstein enacted once in power in the ghetto—combined with his claimed ignorance of the death camps many of his town's people were moved to—come to light. Not uncoincidentally this occurs at the same time as the old man's vaguely elusive digressions and anecdotes become contextualized through his explanation of his mission of running the ghetto as “showcase,” and using the Nazi's “own weapons” of lies against them. The Nazis lying to the world, Murmelstein and the ghetto prisoners lying to the Nazis, and now this solitary survivor's testimony placed in this delicate context.

Lanzmann's new footage and his visibly aged presence in it attempts to intercede somewhere in the middle of Murmelstein's fact-filled combination of incredible detail, explanation, and evasiveness. Yet while the location footage from the 70s of Shoah carried with it a totemic, monumental quality to it (blown up to 35mm from the original 16), the new footage, in sharp, ungranulated modern 35 (looking quite a bit like digital and often a bit imprecise) despite similarly panning across or tracking through the historical-present environments, is not of a unified tone with the interview, as it was in Shoah. Instead, the images look and feel from another world, one changed not just in time's passing but in the way images are made of the present, and of a present so informed by the past. The distance spanned in the film seems immense, Theresienstadt so removed and so fantastic sounding, this specially built and run illusion populated by and condemning real people, as to almost appear, dangerously, as a myth. Which is what makes Lanzmann's tenacious resurrections of his interview with Murmelstein, the Elder Jew's testimony, and the director's insistent trips to and entrance into today's places of history at once cinematic invention, turning inward, and cinematic intervention, exploding outward.﻿