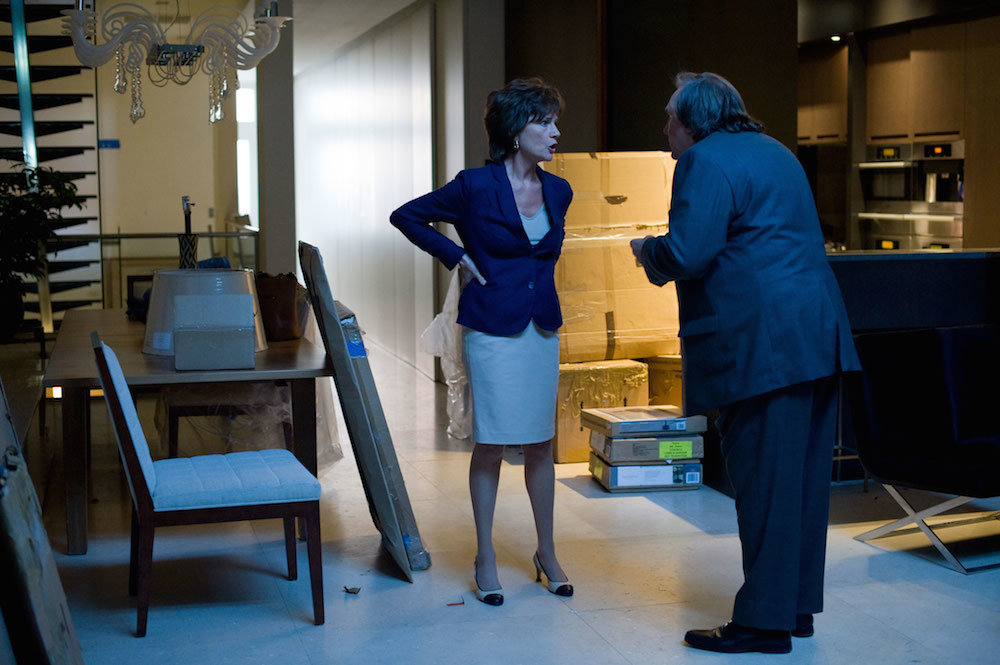 Over in the Official Selection of the Festival de Cannes we can find some very finely burnished biopics—Leigh's Mr. Turner, Bonello's Saint Laurent—but down the Croisette a ways, in a tent on the beach across from the Hotel Carlton, is something too raw, rough and unapproved, too displeasing to the festival and to politicians to be shown here in any official capacity. It is Abel Ferrara's bluntforce drama Welcome to New York, a renegade dramatization of the Dominique Strauss-Kahn﻿ affair.

Wild Bunch, the film's producer and sales agent, staged its "release" as a fuck you during the festival it did not get selected for—and I remember how, unlike almost all outside news which occurs during Cannes, Strauss-Kahn's arrest and accusation of attempted rape in New York in 2011 temporarily interrupted the festival, took over the televisions normally devoted to press conferences and photocalls. They have released this obvious controversy magnet in France through video on demand, a potentially groundbreaking move in a hyper-conservative national industry whose laws require significant time delay for a film to reach VOD after a theatrical release—a couple months for transactional VOD, years for subscription-based access. Its release is certainly a resounding, if local, gesture that not only is Cannes not necessarily essential for one of the industry's biggest players but of course for one of its most irrepressible artists, as well.

In fact, the film began—after a to be expected but nevertheless awful, irritating show of delay, anticipation, lines, rare tickets, and French TV press all presumably staged or encouraged by Wild Bunch to generate fervor—as if we were watching it on demand, with a canned video mimicking someone purchasing the film (for €﻿7 ) online, confirming the purchase, clicking the "full screen" icon, and then the film beginning. With the waves of the nearby beach lapping in my right ear and the thumping base of the unrelated party happening at the adjacent beach tent frontally assaulting the audience of the temporary "theatre" constructed in haste, the experience clearly resembles a post-cinema engagement with the movies: informal viewing conditions where one's  domestic/lifestyle surroundings bleed directly into the viewing, degrading the image and sound in such a way as to flatten its affect until it becomes just one aspect of your surrounding experience. New York Times critic Manohla﻿ Dargis wrote recently wondering if filmmakers knew what subpar conditions their films are often reviewed in because of disrespect for the press, and indeed this weird publicity stunt, which was followed immediately by a press conference with the cast, director, co-writer, and Wild Bunch head honcho, gave little honor to the film itself and much to the nature of its existence and release. The now festival-wide embrace of digital projection as the preferred method of exhibition appears all the more embarrassing in this context, where a film by a major auteur is screened in the city named Cannes and projected in a format essentially identical to official screenings...so then what is the Festival de Cannes?﻿

And yet it was all clearly fitting. Ferarra's film is a clandestine production and unwieldly, containing a series of languorous, lengthy and explicit sex surrounded by a kind of claustrophobic, low budget factual reporting of the scenes before, during and after the hotel room attempted rape perpetrated by Gérard Depardieu﻿'s Strauss-Kahn doppelgänger, Devereaux﻿. The French actor, whose bulk approaches epic proportions and when shown nude resembles a late Lucien Freud painting, owns every frame of the film, radically transforming it away from the specifics of the sex life, New York incarceration, and volatile marriage of his subject. He is simply too big, his gravitational pull is too much; he pulls in the true story and Ferrara's invention and they orbit around his bulk while he makes his way through orgy and jail and infamy with a remarkable heavyset normalcy.

The sparseness of the production and of its images suggest a movie shot secretively, on the sly, and lends it a vaguely apocalyptic air of Devereaux﻿ being the last libertine, a once-great figure and far from the expansive grandeur and decadence of the world of Scorsese's Jordan Belfort. This is way more intimate, more personal, and the drama more rough and unfinished. Many of the dialogue scenes, shot in Ferrara's magnificently philosophical way—a camera tracking a bit sideways in front of a scene, a cut to another camera clearly capturing the same take from a only slightly different angle from a similar position, giving the sense of controlled liveness—appear as if in the middle of an acting workshop, Depardieu and Jacqueline Bisset﻿, who plays Devereaux﻿'s wife, testing out their theories of character in front of the camera.

The spoken lines in English clank awkwardly but always transparently, as if everything we see is an attempt by the production, a complicit attempt to try, try to imagine this thing, this person, this life, this confinement. A whole sequence, like in Hitchcock's The Wrong Man, of Devereaux﻿ being arrested, processed, moved, jailed, moved again and re-jailed in calmly degrading humility and humiliation clashes in its realism against the hot-lighted flailings of the actors afterwards attempting to get at the passion and conflict in the characters. The wife speaks of herself and Devereaux﻿ wearing skins, and he of presenting realities, and we see the film actively working in front of us at this thing, this real occurrence, its—in Bisset's citation in the press conference—very basic Shakespearian dramatics, and in its bare, presentational sense of being a modern myth.

Depardieu is here a true modern day god who stumbles in one of many trips to earth. Yet only his body and indifferent, almost unflappable aspect, his abstracted lust and anger, indicate his godliness. The film cloaks him well in scenes of checking into and out of his hotel, going from and to the airport, getting undressed and dressed with gross difficulty. But Ferrara exposes him, behind the scenes, in his bedroom, in his home's living room, and in a gorgeous shot on a Tribeca rooftop, as a god working out the concerns of his human form and finding them confusing.

When we see Depardieu-as-Devereaux﻿ force his crotch again and again into prostitutes, or in the incredulous scene of his hotel attack, his pale sagging belly and glimpsed scrotum, this is not a man but a god struggling in a man's skin, wheezing uneasily after each attempted rape. There is no glamour to his life or lifestyle (a great detail: he always carts his own luggage, asking for no help), no enviable excess, just something bizarre, oddly banal, uncomfortable and bare. The expressions and exertions of something not quite understood from within or from without. Bisset's wife nearly says as much, and the weird history of her family background (pure wealth, collaborationist father) only tips the play into a kind of classical debate or dialog, not a melodrama of husband and wife and infidelity.

There is absolutely a certain strange melancholy in this horrendous, gross figure, his pathetic existence in the office, hotel, jail, court, and home. The vision of America, and of New York, is, from New Yorker Ferrara, unflattering, utilitarian, entrapping. Is this our world as seen by a god descended? Is his frustration that of schism between his proper place and ours? Regardless, here and now he is a louse, forlorn. And what could better fit this slimy charisma, this scuzzy idealism, this New York story of threadbare affluence than to exhibit it in an even more degraded and banal manner, through video on demand? There is undoubtably more than a little bravery and force in such a inchoate, lumpen vision as this film and its release.