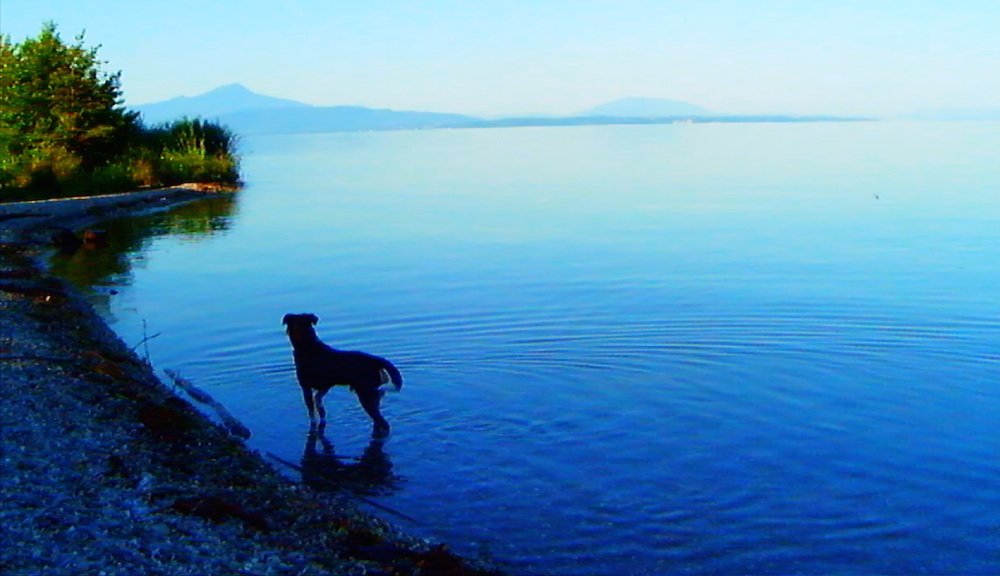 I fear to write about a film quickly is to write it weakly. But there is an obligation here because, finally, Godard. Oh, Godard. Ah, dieu. (Adieu, Godard?) Jean-Luc is in Competition again, his first inclusion since over a decade ago for my favorite of his films, In Praise of Love. This could be his last; it feels like his last. Not the solemn, Mediterranean tableaux canvas of Film Socialisme nor the thicket-dense essay of his first 3D film, Les trois désastres,. No, Adieu au langage is softer, smaller, lighter and light filled. A poem, not an essay.

A poem about a dog who connects two people, a couple having an affair. Nearly half the film is the dog and the dog's roving vision, in scalding, phosphorescent colors and smudgy 3D. The couple, sensual and lucid, eventually wilt under the weight of domesticity and inequality not just in the home or between the sexes but between two people. As the film says, one cannot be free when looking in another's eyes; but it is hard to be free, to be alone. The dog seems alone, alone and wonderfully free, wandering a resplendent countryside of forests and waters. But he also often seems sad, and his glory as well as his solitude affects the film. It, like him, are on a quest for a new reality. "When imagination has failed one must take refuge in reality," but in Adieu au langage it is obvious that reality has been lost, lost by painting, by cinema, by two dimensions. One must keep looking.

The humans are cut up in space. Godard takes 3D even further than his evolutionary short film last year, doing things on the cheap with mere composition—color and form in delineated space—that no other 3D film has done before. In a revelation that inspired spontaneous, delighted applause from the premiere audience in Cannes—a screening which began with an anonymous person in the dark shouting "Godard forever!" and inspiring enormous applause—the director even splits the 3D image, one plane and image in one eye, one in the other, the image splitting with seemingly two opposing camera pans, one becoming two that can be one, cinema uniting and splitting and uniting. Impossible, but there it was. The two: people are always two, each their own, and long to be one, together. The radically deep, sculptural 3D takes the ideas Raúl Ruiz﻿ took from Orson Welles and Edgar G. Ulmer and adapts it for the false trueness of 3D, where the image jumps at you, longing for your eyes, or your eyes for it. And often it is so 3D it hurts, a grasp towards reality that pierces.

The shots, the scenes are brief. Scene, pause, intake of breath, scene. Limpid and lithe, with sweetness and room for your senses to move and think. Fresh, very fresh, your eyes are pleased and the sound, oh the sound in the Lumière﻿ theatre, ricocheting from side to side, music, sudden intrusions, and a man and woman in dialog, the assertiveness of it, and its marvelous tone, inquisitive, searching, rarely aggravated. The melancholy and sadness, a biography read from an iPhone at a roadside bookstore, wonderful, an admonition that Solzhenitsyn﻿ did not need Google to find the subtitle "An Experiment in Literary Investigation﻿." Nor does Godard need Google to find a "farewell," but he may need Apple. A man holds an iPhone in 3D, an image so powerful that no one in Hollywood could conceive of it, though Ulmer, the Siodmak brothers, Zinnemann﻿ and Wilder might have done so if we transported them from 1930 to 2014.

The couple, always back to the couple, the two, in Godard, to love and to work, the struggle to be and remain one. Godard himself, a rare voice on the rich soundtrack, introduces a reading of Shelley's Frankenstein (written in Godard's Switzerland), where the doctor asks if not creating the monster a companion was a vice. A vice to create someone to be alone. Which, I suppose, is why we invented language, and, later, images, to lose our freedom and try to communicate what's inside.

Indeed, which is why we need an animal to show the way: this moving color poem says that Rilke said that what's inside is known only to animals. Godard's is a film of the outside, of the supine skin, of reflections and bodies hanging in space, literally of the outside, outdoors, of travel and transport, outdoor movement. But to get inside, here it seems impossible, which may be why the camera follows the dog, Roxy, so tenderly, intently, with such dedication. As one should follow anything that may help us reach an accord.