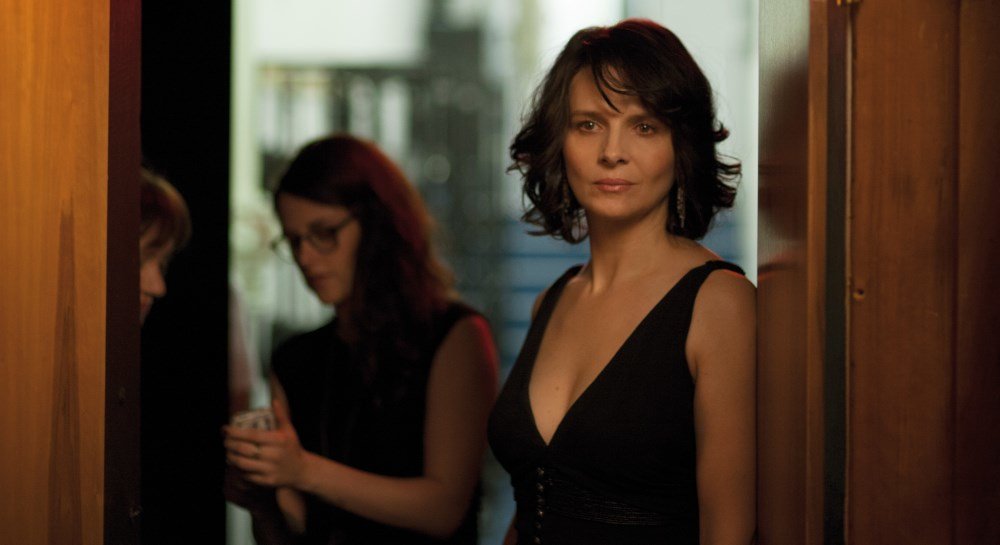 Here is a film that feels its age, the age of its maker. But this doesn't mean a young hotshot's film or that of an old master—though Cannes had its share of both. French director Olivier Assayas is 59, and his Clouds of Sils Maria feels it. A unique thing, a movie that feels an expression of middle age, of considerate maturity, of a medias res—a favored storytelling technique for the director—movie very much aware of this age between the entitled, risk-taking energy of the young and the settled, comfortable wiseness the senior artist.

Yet it's not about him, the auteur, it's about a woman, an actress, a veteran: Juliette Binoche as an actress of Binoche's age (50), caliber and reputation. After the death of the playwright and director who made her acting name as the young girl in a psychosexual play opposite an older woman, she is moved to star in a theatrical revival now in the part of the older woman. Binoche's personal assistant, played by a very American Kristen Stewart, acts as a sounding board for the actress's worries swirling around the death of her mentor and a self-evaluation of her life, as well as a rehearsal partner for the old-new play. The relationship of the two clearly echoes that of the two women in the play, which sounds vaguely like Alain Corneau's Crime d'amour, where an older professional becomes dependent on—psychologically, professionally, sexually—her young protégé. To complicate things further, the young actress in the play’s revival, played by Chloë Grace Moretz, is envisioned as a new generation of actor, a hybrid figure of professional training, a Kristen Stewart-like pop genre career in the movies, and the tabloid candy public life of someone like Lindsay Lohan.

This final figure in the triangle, and Clouds of Sils Maria﻿ is indeed structured in three parts, is definitive in expanding the scope of the film's inquiry into womanhood, acting, artistry and aging. Despite its staging of this swirl of female self-questioning in the majestic Swiss retreat of Sils Maria—a world away from the world, where the deceased author lived and after which his play is named, a kind of mythical-natural origin point, not to mention where Nietzsche spent some time—Assayas confronts Binoche's clearly Bergmanian persona crisis with the techno-pop world within which her work and life now exists. Though well integrated and true-feeling, Assayas reveals his age by his foregrounded interest in Skype calls to agents, the PA juggling iPhones and Blackberries, the seriousness and integrity (or not) of comic book movies, Google Image searches, wonderful simulated press conferences and an actress paparazzi freak-out, and the flattening of celebrity culture and acting. In a highlight, this attention to modern culture even lets the film exuberantly and joyfully stage a scene from a sci-fi superhero movie starring Grace Moretz and then have Bincohe and Stewart debate its artistic merits after the screening.

In other words, unlike Bergman's more abstract, interior, psychosexual Persona, Assayas sticks to the interwoven surface of the acting world which would inspire any actor of any age to continually question their work and themselves, on the inside. The beautifully unshowy relationship between Binoche and Stewart is at the film's center and is emblematic, a blended dynamic touching that of employer/employee, peers, friends, lovers, and actors. In Binoche's confident but erratically worried and self-doubting actress, we find the position of the film’s director: she's at the height of her powers and sense of self, but inextricably aware of a rapidly aging world whose renewing, complexly layered youth are not only unavoidable in life and profession but necessary.

﻿Yet the film is hardly as heavy as Bergman's psyche-probes, or, say, Jacques Rivette's theatre conspiracies, both of which Clouds of Sils Maria lightly touches upon. It moves with a direct clarity, introducing its ideas outloud and letting its excellent actresses move and articulate the mise en scène﻿. The actresses—and a very particular sense of atmosphere to the Swiss setting, sun-drenched windows, open to the outdoors, necessary drives from town to chalet, the mountain hikes. It actually calls to mind the terrible English title of Assayas' last film, Something in the Air. The thin mountain air and characteristic lighting of this origin point, of this staging ground, of this retreat, suggest both a fragility and a serenity. As if, the closer to the top one gets, the older, the greater the vision and understanding, but also the greater the danger.﻿