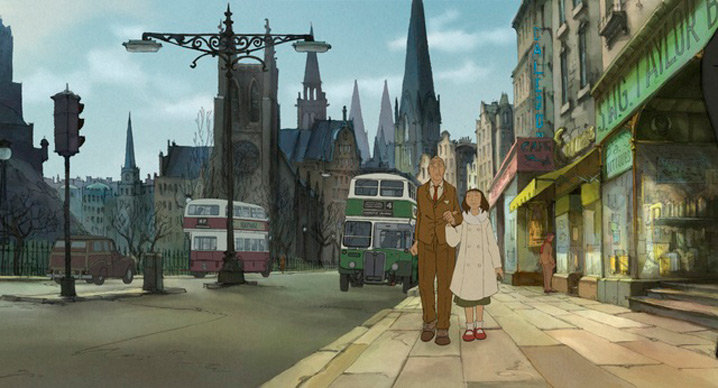 Alors. The opening gala film at this year's Edinburgh International Film Festival, The Illusionist is an animated film by Sylvain Chomet, who made The Triplets of Belleville, based on an unfilmed script or treatment or scriptment by Jacques Tati. So, rather like the Kubrick-Spielberg hybrid A.I. Artificial Intelligence, it's tempting to treat it as an artifact whose uncertain authorship is its most interesting feature. But as with the fascinating blurring of two very different sensibilities seen in the earlier science fiction fairy tale, to get too caught up in that question may result in paying insufficient attention to the object itself.

Certainly Chomet's view of the world is closer to Tati's than Spielberg's to Kubrick's. His first feature paid respectful homage to Jour de fête (and being a French visual comedy with a bicycle in a central role, how could it not?) which brought Chomet to the attention of Sophie Tatischeff, who bequeathed to him one of her father's projects (there are others which, who knows, may still surface). Though Chomet dabbled with live action for his episode of Paris, je t'aime, his decision to create The Illusionist as drawings moves him a comfortable distance from Tati's work, while his "casting" of a Tati caricature as central character pulls the other way, encouraging us to see the film as a posthumous work by a (re)animated auteur. 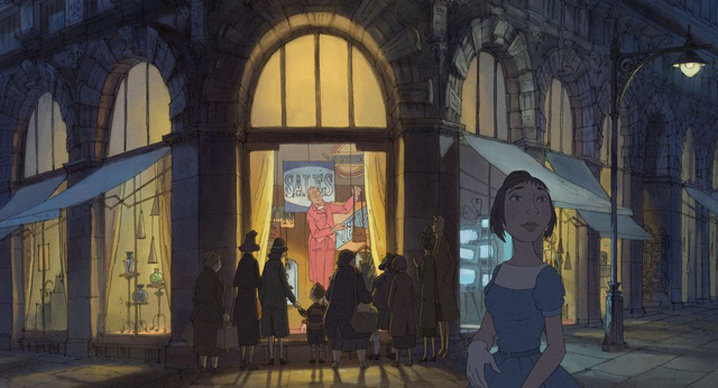 As they say in France, whatever. The Illusionist, a tale of a magician making the rounds of the dying music hall circuit in the early sixties, acquiring a runaway teenage girl from the highlands as temporary foster-daughter (the story was Tati's tribute to his own child), is extremely charming and sometimes funny. Sometimes it echoes Tati in unexpected ways, such as the crowded backstage opening sequence, where different lines of action compete for our attention rather as they do in Playtime. Chomet's characters, all designed by the director himself, are comparable to Tati's since they exist largely in terms of overall design (costume and physiognomy) and movement. Dialogue is deemphasized, with Tatischeff the illusionist mumbling in French, his protege from the Northern Isles speaking Gaelic, and various varieties of Scottish and other voices emanating elsewhere (a solitary American in a fully-automated car expostulates a serious of fractured soundbites composed of a garbled mix of Americanese catchphrases and sheer gibberish). This means that nobody understands anybody except by the context of the scene, and like Tati, Chomet proves adept at making us understand quite nuanced interactions purely through situation and body language.

The action shifts from Paris to the Hebrides to Edinburgh, where the bulk of it unfolds. Tatischeff struggles to earn a living, supplimenting his theatrical takings with an unsuccessful stint in a garage (the jokes about technology have an unusual quality, since they're a 21st century rendition of 1960s parodies of modernity), and his young charge finds love in the arms of a hunky Scotsman clearly patterned on the young Sean Connery (Edinburgh's favourite native son). The film is a joint love letter to Tati and to the city Chomet has made his home in (Tati's story, I believe, was set in Prague), and at times there are almost too many glowing vistas of ricketty old-town quaintness. But Chomet clearly admires the way the light changes from moment to moment (the very thing that makes Scotland a difficult location to shoot live action in) and his Gallic take on Scotland, and on the Scots' take on France, reconfigures the city into a kind of dreamland. (Chomet has always been inspired by the foreign idea of Frenchness: onions worn as an adornment, and all that.) 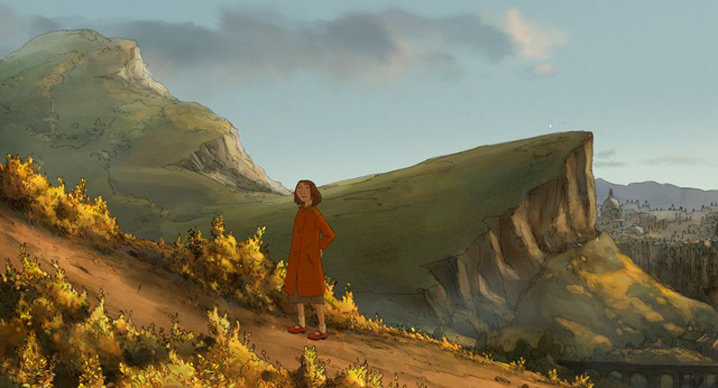 Chomet hits the sentiment slightly harder than any Tati film ever did, although he's still impressively discrete about it compared to most. The score, which he composed himself, underplays the big moments and references Monsieur Hulot's Holiday only glancingly. The world of Chomet's movie does include a few unpleasant characters, including a gang of kids seen kicking a drunken clown, and various mean Scotsmen who deprive the magician of his earnings, which points up how singularly free of meanness Tati's own films were.

Some of the gags have an authentic Tatiesque feel, though sometimes they feel too widely spaced. Mature Tati would often go quite far out of his way to avoid the obvious joke, and deliver instead some humorous moment of behavior or observation which couldn't quite be termed a gag, and existed on some unnamed plane between insight and fantasy. You don't quite get that here, and it seems churlish to ask for it. And we should realize that, however detailed Tati's testament-script may have been, his true magic was created on the set/location, in the interplay of camera, actor and space. Even the gloriously un-PC joke of the cross-eyed man attempting to hammer in a tent-peg in Jour de fête was suggested by the presence of an actual villager with a spectacular strabismus. But sometimes it's enough for Tati to suggest a situation: the film's funniest sequence is probably that when Tatischeff suspects, wrongly, that his young ward has converted the rabbit he uses in his act into a ragoût. Chomet then extends this moment into a small symphony of wordless discomfiture. 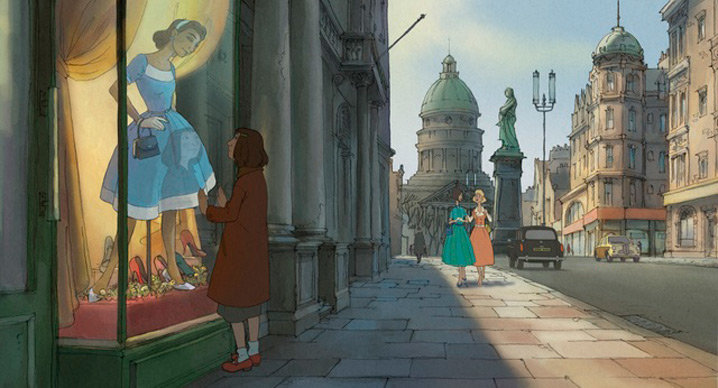 In the end, this is a Chomet film, as it had to be. Fans of Chomet will love it, and fans of both Chomet and Tati (which I confess to being) will really love it. Those who were able to resist the charm of Chomet's previous feature may not be so pleased, although the new film represents an advance in terms of use of colour: The Triplets of Belleville achieved its nostaligic feel partly by useing a restricted palette of mucus-hues intended to evoke sepiatone, whereas The Illusionist is as radiantly rich as Tati's own movies, without losing any sense of period.