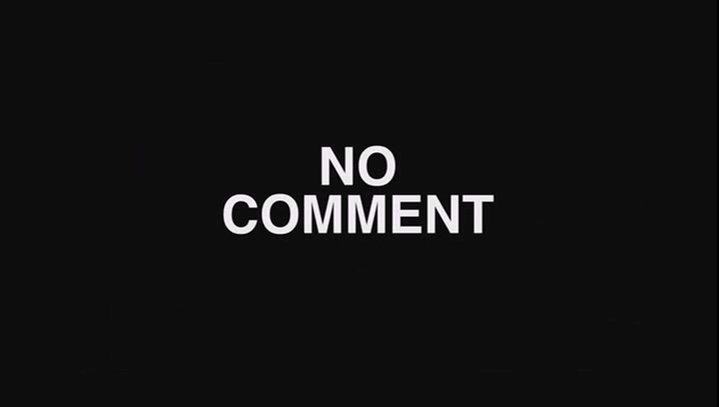 "No Comment," reads the final title card of Film Socialisme. Despite being on screen for only a few seconds, it's become—in the year or so since Film Socialisme played at Cannes—the film's calling card, an endlessly Tweeted cinephilic in-joke repurposed as often to express love for the film as frustration with it. Coming at the end of a stridently polyglot movie stuffed with statements, "No Comment" stands out by being 1) a well-known English phrase and 2) the ultimate non-statement. On its own, it appears to be a puckish deflection, a great big jokey shrug to ward off interpretation and criticism, but within the context of the film—and, most importantly, as the last thing the audience sees—it reveals itself as the opposite.

Film Socialisme ranks as one of Jean-Luc Godard's most optimistic films, one of his most idealistic, for the simple reason that it seems to have been made for a better world. For his entire career, Godard has positioned himself stubbornly, permanently, tragically at the terminal end of cinema—or whatever "cinema" may constitute at any given moment in his life, be it the playground of profound hokum and momentous moving pictures of the mid-20th century, or the melancholy world of conflicting images of the present. His body of work attempts—amongst many other things—to address a medium on its own continually-shifting terms; Histoire(s) du cinéma, for one, sometimes resembles a letter or a poem that expresses an unrequited love using the private language and personal history shared by the lover and the object of his affection.

Unlike, say, Notre musique, Film Socialisme lacks any aura of private correspondence; it's not a work addressed to something that the audience is privy to, but a work addressed directly to its audience. Profoundly sincere and therefore destined for rejection, Film Socialisme wants an audience that is willing to be make the film's images its own. In an age when films are largely seen (or at least advertised) as foreign objects to be consumed in order to satisfy immediate, specific desires, wanting this sort of audience involvement—personal, intellectual, emotional—is idealistic. Whether in the movie theater or on the living room TV, movies are often expected to serve roughly the same purpose as cheap take-out. Half-a-century ago the idea of a movie made for everyone that played off an audience's yearnings was a model for good business; in the 21st century, it seems downright Utopian. In this day and age, a film made for everyone might as well be made for no one (it goes without saying that the makers of second-tier "slow cinema" features meant for the Rotterdam crowd are playing to the expectations of a target demographic just as carefully as the folks behind X-Men: First Class); similarly, a film whose specific meanings are open to a degree of personal interpretation by the viewer appears obscure or even meaningless.

"No Comment" is not a deflection of responsibility, but a declination (from, of course, the master of declining) of authorial control. That is: he has declined to comment so that others might instead. Directly preceding this final statement in Film Socialisme is the second-to-last image of the film, in which the FBI anti-piracy warning that usually goes at the beginning of DVDs is overlayed with the words, in French, "When the law becomes unjust, justice comes before the law."

Godard's made a few comments lately about his stance against copyright, and a few gestures, too, including a token contribution to a pirate's legal defense fund. Being, in part, a film about how culture is (or isn't) transmitted and repurposed, Film Socialisme is also a film about copyright. Copyright law replaces authorship with ownership; it institutionalizes the barrier between the creator of a work and his or her audience. So, in a world where the more draconian expressions of copyright—the transformation of a work into a property to be sold and controlled, instead of a protection of the authors' rights—are givens, the only way to resist is to cease being an author yourself. The notorious Navajo English subtitles, then, begin to look less like a fuck you and more like an invitation to play "author" along with uncle JLG. The bare-bones English subtitling removes both the actors' and the writer's authorship from the dialogue; sentences are boiled down to sets of nouns that—free of style or ideology—the viewer can use as guide-posts to establish their own statements.  (Two important stories should be mentioned here: the one about how the old Cahiers gang used to watch unsubtitled prints at the Cinematheque and the one about how Godard supposedly asks his actors to write the lines of dialogue out themselves in order to learn them, in a sense letting them become authors of the work.) So while the bootleg-English-subtitled version of the film that's been circulating since last year is closer to the actual content of Film Socialisme, the "Navajo subtitles" are closer to its intentions.

And yet very few want to come out and play. For all its (comparative) looseness and goofy humor, for all of its bursts of familial warmth, Film Socialisme—unconsummable, unmonetizable, organized and yet not hierarchical—seems alien, a film made for a world that accepts images instead of merely digesting them.