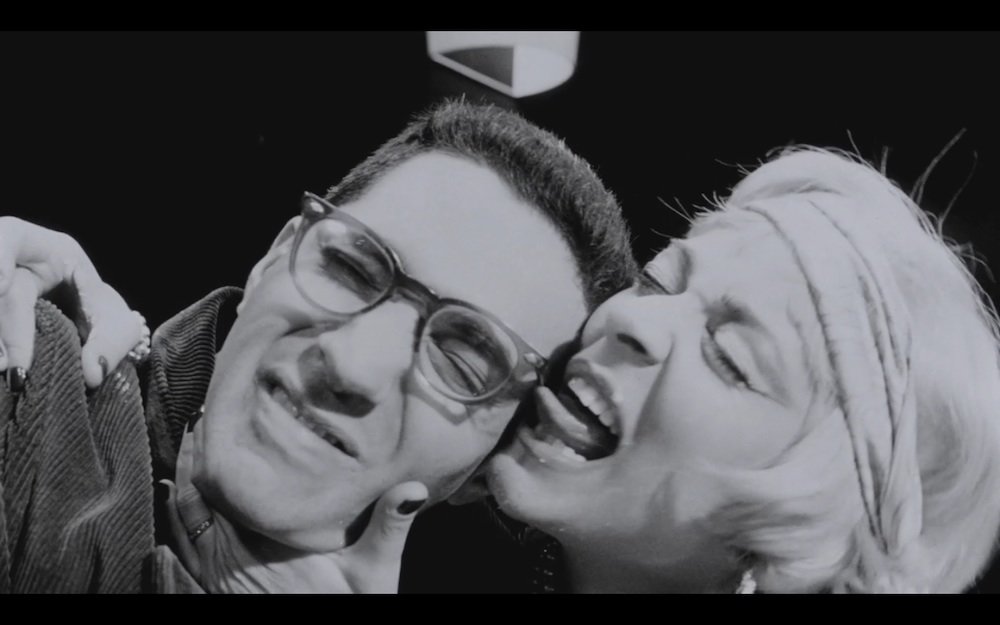 At the end of the most recent season of his superb FX series, Louis C.K. made an unusual pass at long-form storytelling. “Late Show” finds Louie at its most overtly dramatic and—for a show that regularly exults in narrative ellipsis and melancholia—its most accessible as well. It tells the story, over three episodes, of our hero’s unlikely journey to succeed an apparently retiring David Letterman. As an increasingly confident director, C.K. has continued to explore more adventurous possibilities. Louie is essentially a hybrid of the comedian’s impulses as a stand-up and as a straight-ahead sketch writer. The man on stage, with all his fear and responsibility and desire and dread, is dropped into a world conceived to afflict these very qualities, a world that must be endured. The jokes come later, when we can make sense of it all. Whatever truth is to be discovered in Louie is shaped by the man’s perspective, so his heroism is aesthetic, and every image is also an image of him. This, unmistakably, is personal cinema, and it surges through “Late Show” almost effortlessly. In the end, defeated, Louie still raises his fists Rocky-like beneath Letterman’s marquee in defiance and triumph.

Defiance, sure, but triumph is less obvious. We might say it belongs to the real Louis C.K. who, after thirty years working mostly in the margins, has finally mastered his fate in the way his avatar could only dream. Aside from the total creative control he has over the show, C.K. is also producer and distributor of his own stand-up specials. He’s even talked more and more lately about a return to feature filmmaking, which, if “Late Show” is any indicator of what we can expect, is already overdue.

Perhaps to lend greater context to this part of his career, C.K. has released a digital restoration of his debut feature, Tomorrow Night, on his website for the now-familiar going rate of five dollars. The film premiered at Sundance in 1998 but never found a distributor, and has gone largely unseen until now. C.K. had been producing short films professionally since 1990 (many of which are available on his YouTube channel), using friends and fellow performers, and Tomorrow Night largely emulates the rhythm of those sketch-like pieces. Production designer Amy Silver and photographer Paul Koestner still work with C.K. from those days. The latter especially applies deft, almost impressionistic touches, expanding the visual palette with moments of unexpected stillness and beauty—a bicycle in the rain, a silent man on a ferry, all in crisp 16 mm black and white—between more tense and chaotic character-driven scenes. Fans of Louie will recognize that characteristic typeface, lounge-lizard score, and a Pittsburgh whose subways suspiciously make stops on Houston Street, but the comparisons begin to break down from there.

Comedian Chuck Sklar plays Charles Brown, owner and operator of a camera store whose days consist mostly of discouraging customers from bothering him with their business, and obsessively cleaning his counter. When growing stacks of unclaimed photo packets begin to offend his sense of order, Charles sets to tracking their owners down. One such truant is Florence (Martha Greenhouse), a dull, hapless old woman living in a drab apartment block with her abusive husband and the memory of her son now twenty years lost. Tomorrow Night is ostensibly the story of their May-December companionship, but the two of them aren’t set into motion so much as cut adrift. The film is rife with digressions; outbursts of absurdity that threaten to tear an already tissue-thin sense of reality apart.

The mildest of these eruptions comes from Mel the Mailman, played J.B. Smoove, already a fully formed comedic persona nearly ten years before his career-making turn on Curb Your Enthusiasm. Loquacious and charismatic, Mel takes time from his route to genially skewer the awkward and immovable Charles, seemingly arriving from another film altogether. With his warmth and dimensionality, Smoove augments the film’s cartoonishness without overpowering it, deployed by C.K. as though the director sensed his film needed a pep talk in the midst of its parade of grotesques. 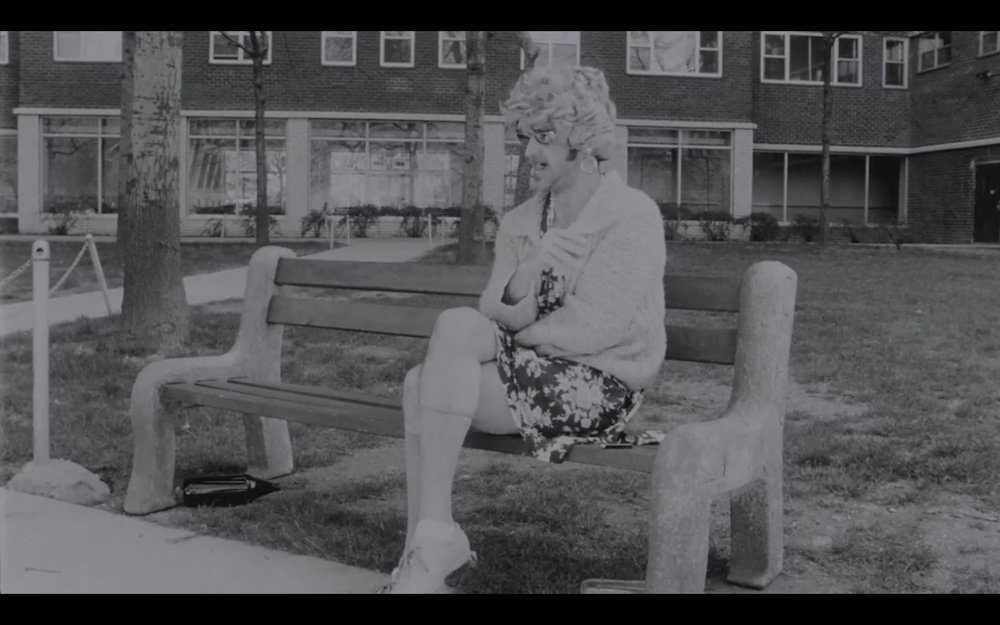 The most memorable of these, and the funniest behind Smoove, is Rick Shapiro’s Tina. A disaffected and resentfully libidinal housewife, Tina is also very clearly a man. Shapiro’s sideburns show beneath an ill-fitting wig, and his Adam’s apple shows proudly beneath prodigious facial stubble. Her voice is a gravelly smoker’s, and most un-ladylike. Tina’s eyes dart manically from side to side behind a skewed pair of glasses as she spouts inflamed sexual anecdotes about her husband and anonymous men from the Port Authority. Shapiro’s character, channeling early John Waters, is the first indication that Tomorrow Night has stranded us in the realms of the truly bizarre, and that the salvation from something resembling reality might be beyond our reach.

This may lead to the film’s major shortcoming. For all its goofiness, Tomorrow Night is a world of the mind. Its plotlines are abstractions, its characters shallow contrivances. There is the sense that C.K., a writer for the likes of Dana Carvey and Conan O’Brien, has seized the opportunity to run rampant with his strangest and most precious ideas, ideas that are antithetical to network television. The film’s humor harps exclusively on the same desperation and stupidity that fuel the more primal moments in Louie, albeit stripped of that show’s emotional stakes. There’s humor to be found here, but it can be wearying at feature length. For all the abuse he might sustain or the ridicule he might deserve, Louie’s main character rests on human bedrock—even while silent, or gesturing opaquely, Louie wears his empathy like a halo. But we have no investment as viewers in Florence’s loneliness or Charles’ frustration. They are selfish, unreflective people, powerless to rise above their types, though this is perhaps due less to wretchedness or stupidity, and more to the film’s generally schizophrenic climate. We share in the film’s contempt for them, and it’s indifference when they meet their respective ends. Whatever grain of sympathy there is to be found in Florence’s wailings or Charles’ faint grasping for empathy might only expedite our perverse wish for their destruction. This could be C.K.'s point, but it’s an arid and academic one. 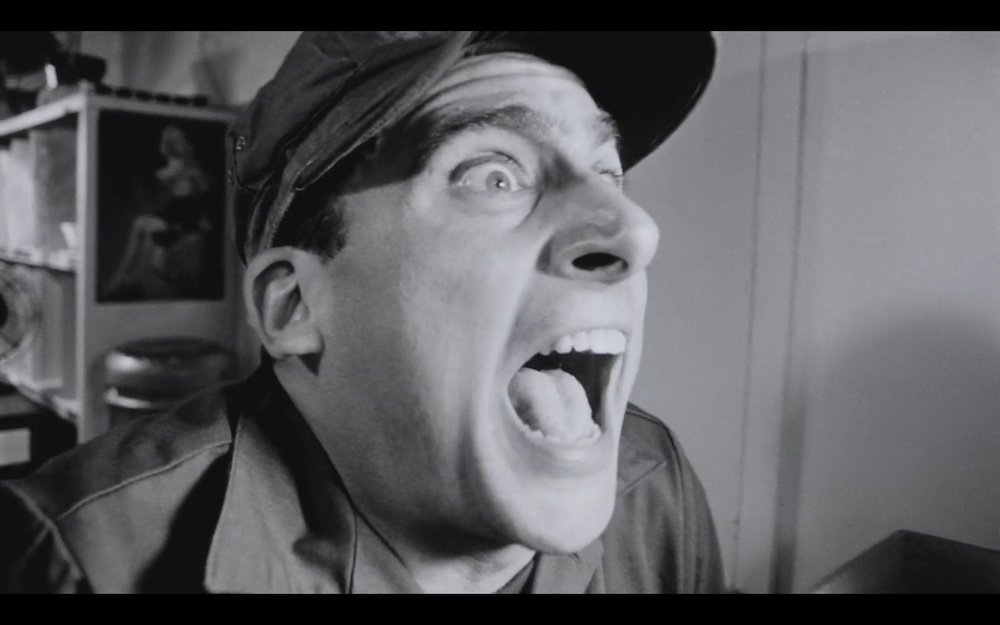 Another of the film’s asides even recapitulates this willful authorial cruelty in miniature. The twenty-year silence between Florence and her Army-bound son Willy is, as it turns out, actually the work of two sadistic mail clerks, played by Robert Smigel and Steve Carrell. Willy is dumb as nails, a born sucker, and they aim to make him suffer for it. When they offer to pay his fare back to Pittsburgh, the bus they put him on is bound for Mexico City. Even lying to Willy’s face, Carrell cannot resist howling with the laughter of the possessed. 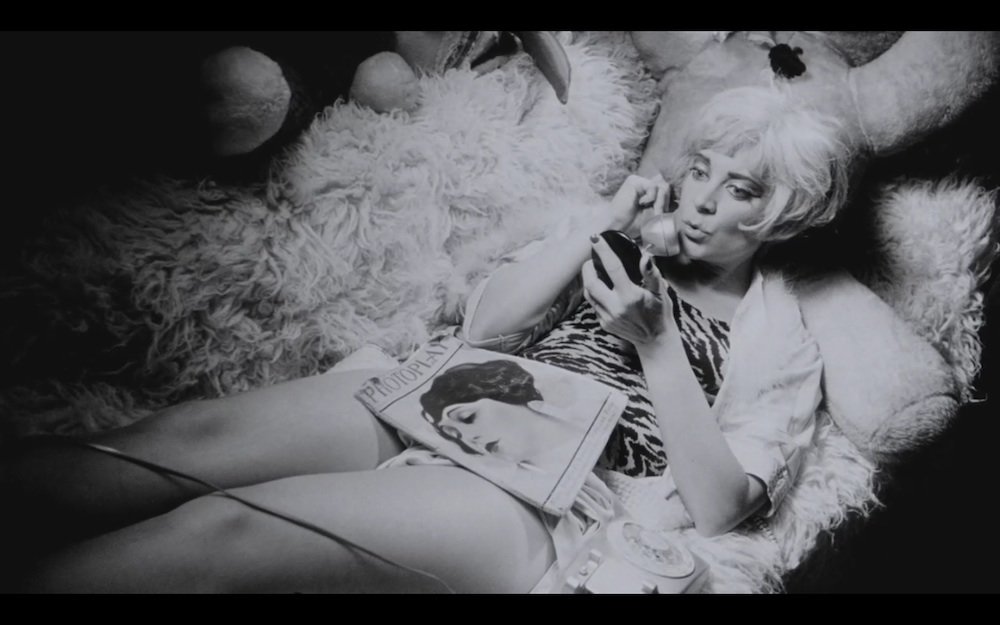 The Pittsburgh of Tomorrow Night is a kind of hell in its own right, populated by the likes of Florence’s cackling, demonic husband Lester and the militantly sexual Lola Vagina, played with vaudevillian expansiveness by Heather Morgan. Early in the film, Lola propositions Charles for a date, though in the course of things she seems more interested in devouring him whole. Back at her apartment, Lola’s husband—apparently rendered sexually inert by his wife’s ferocious appetite—gives Charles coital instructions so heinous he’s forced to flee. Such emasculations start to seem redundant, but our director is seeking hard truths in belaboring the point. Whereas in Louie, C.K. might lend his character (and his viewers) a moment to reset, to return to a psychologically and morally stable ground floor, in Tomorrow Night, total elasticity reigns.

Coupling and its discontents is apparently on the comedian’s mind. From the psychotic catatonia of the Vagina household, to the claustrophobia and terror of Florence and Lester’s marriage, and finally to Charles and Florence’s wedding where Charles’ moment of decision is elided (Lester is conveniently devoured by dogs the night of a big win at the off-track betting parlor), we gradually begin to see outlines of a personal perspective on the institution. 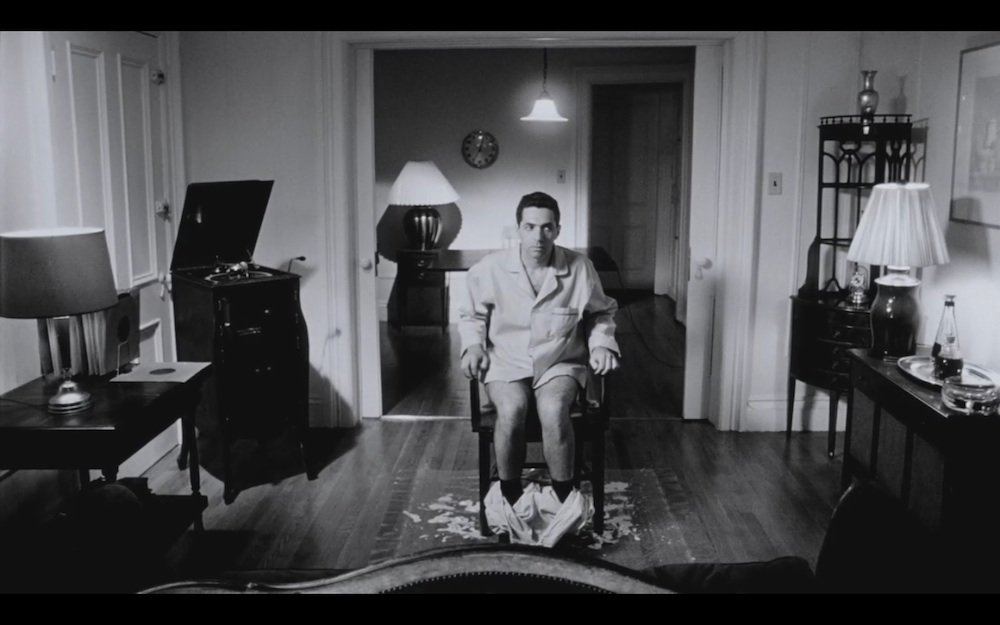 Florence wants a baby to replace her lost son and Charles is unwilling at first. That is until he is ‘caught’—not with a lover, but with a bowl of Neapolitan ice cream. The elaborate onanistic ritual, wherein Charles grinds his exposed nether-regions into the overflowing bowl, is shown in methodical detail (the bowl is always stainless steel and spotless; an old gramophone record is always playing in the background) at several points in the film. Were Tomorrow Night to succeed more fleetingly or fail outright, this sequence—a complex and ridiculous interplay of gratuity and compulsion, of oral indulgence and anal shame—would still flash with undeniable comic genius. Florence is horrified, but agrees to remain in the marriage if Charles will agree to a child.

Clean, the mildly sociopathic adolescent whom the Browns adopt, doesn’t have much interest in his new family. By this point we might not have much interest in them either. It’s a weak third-act gesture, necessary if only to complete the domestic farce. Saddled with the care of a child that’s a stranger to him, in a life that is not his own, Charles is a comic mirror of that anti-comic family man, Henry Spencer in Eraserhead. David Lynch is a touchstone throughout Louie, even appearing as Virgil to Louie’s Dante in the overtly Lynchian “Late Show.” On the Freudian plain of anxiety and desire, the two men are kindred spirits—one spins his discomfort into comedy, the other into unalloyed dread. The surreally bursting likes of Lester or Lola wouldn’t miss a beat riding alongside Frank Booth. As Charles, Sklar even dresses to match John Turturro in Barton Fink, himself an homage to Jack Nance’s iconic role. Where Henry’s fate is ecstatic, though, Charles’ is an afterthought, and the meandering Tomorrow Night ends with something of a whimper.

In 1998, the breakthrough that would elevate C.K.’s comedy was still seven years away. He had not yet thrown his first, more obscure stand-up act away, in favor of the confessional material that’s made him famous. Tomorrow Night will have its admirers among his fans in spite of this fact. Others still may see the film as a forerunner of more intensely Lynchian strains in contemporary comedy—an apt double feature alongside something even more abrasive, like Tim and Eric’s Billion Dollar Movie. A similar reassessment has given cult credibility to C.K.’s more ebullient if equally absurd Hollywood follow-up, Pootie Tang, from 2001.

The lessons of that film have apparently not been lost on the comedian. When Paramount was dissatisfied with the cut C.K. delivered, they fired him from the production and released a recut version that was roundly panned by critics and forgotten shortly thereafter. The degree of control C.K. exercises over his own productions today is a testament to a renewed faith in creative autonomy, and Tomorrow Night is perhaps closer in spirit than Pootie Tang to what a new Louis C.K. film would look like. With the distribution secure and the audience already fully in place, this film would have to be the most highly anticipated film from a director that never made a hit.