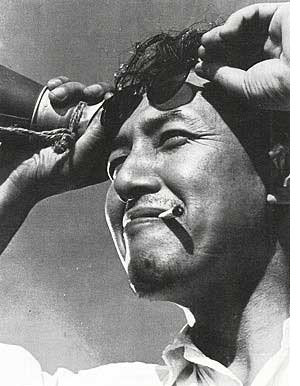 Tomu Uchida first caught my attention during a massive, memorable retrospective of Japanese cinema at the Sherman Theater in Van Nuys, CA in 1980. A quick search of standard reference books revealed that Uchida's official classic was 1939's Earth, a quasi-documentary account of the lives of peasant farmers, shot over the course of a year to capture the changing seasons. No complete prints of the film are believed to exist, and in any case Uchida's reputation in 1980 was too low to generate much demand. For the next thirty years, my assumption that I'd never see Earth remained intact. But I woke up one morning last week to learn that a version had been made available online, with homemade English subtitles; and twelve hours later, Danny Kasman and I were watching it, astonished to be living in such exciting technological times.

Uchida had a broken-backed career. He began directing in the 20s and rose to prominence at Nikkatsu in the 30s: during the years 1936-39, he placed four films in the Kinema Jumpo top five. During this period, Uchida was known as a director of politically charged, left-leaning films, with his most acclaimed work often made in collaboration with writer Yasutarô Yagi. In the early 40s, he left Nikkatsu and took a job with the Manchurian Film Company; he logged some time in a Manchurian internment camp after the war, but apparently prolonged his stay abroad voluntarily. In any case, he did not return to Japan until 1953, and directed no films between 1940 and 1955. The second phase of his career, lasting until his death in 1970, was not without prestige or awards, but he never equaled his prewar standing in the industry, and his later output is dotted with genre projects. Still, if critics failed to find thematic consistency in his postwar work, Uchida retained his impressive visual gravity, adapting it effectively to the more stable compositional style of the widescreen era.

Earth, based on a 1910 novel by Takashi Nagatsuka, was the sort of project likely to appeal to film intellectuals of the time, with its focus on the plight of the poor farmer and its invocation of the authority of documentary. Donald Richie relates that Nikkatsu vetoed the project, but that lower-echelon studio functionaries helped Uchida make the film on the sly by diverting money and resources from other productions. According to this story (which I can't quite make myself believe), the studio heads were annoyed when presented with the finished film, but released it as a favor to their workers, whereupon it became an unexpected commercial success. Perhaps this unusual production history explains Earth's freedom from the overt patriotic flourishes so common in wartime films. Still, the film's social awareness stops consistently short of a political advocacy that might not have been acceptable to the Japanese government.

The print of Earth that made its way to the Internet was apparently discovered in Germany in 1968, and is seriously compromised. On top of a bad case of nitrate damage and hard-coded German subtitles, the film is missing its first and last reel. (The IMDb says that Earth was originally 142 minutes long; this version is 93 minutes.) A 119-minute version of the film, again with hard-coded subtitles, was discovered in Russia around the turn of the millennium. It too is missing the last reel.

Whatever allowances one makes for the degraded image, the missing footage makes it impossible to evaluate some aspects of Earth. The plot, which is only occasionally foregrounded, centers on the hard-luck peasant Kanji (Isamu Kosugi) who is embittered by having to pay off the debts of his dead wife's aged father Uhei (Kaichi Yamamoto) and whose protectiveness of his daughter Otsugi (Akiko Kazami) is beginning to restrict her interaction with the community. Often these threads seem less important than the images of farm life, which have their own narrative progression. Though the story's dynamic is not simple—Kanji's treatment of his father-in-law rouses the ire of the entire community, yet Kanji's mournful sense of victimization is depicted sympathetically—the filmmakers do not engage fully with the family's emotional problems until near the end of the truncated print. With twenty or more minutes missing from the beginning and end, it remains unclear whether the documentary material is a background from which the personal story emerges decisively, or whether the personal story is sketched lightly on the surface of a film whose primary mission is to depict a milieu and a way of life.

If the incomplete print garbles story strategies, it gives us more than enough evidence. despite its deterioration, that Uchida's visual and conceptual invention never flags. One first notices in Uchida's style a kind of romantic expressionism, both in the lighting and in the performances, that sometimes suggests Murnau, sometimes Eisenstein (two filmmakers who perhaps have more in common than film history alleges). The hieratic performance of the old grandfather Uhei is a striking stylistic flourish: his larger-than-life aura, which contrasts with his unremarkable qualities as a human being, is a function of the sculptural slowness of his motion and the high-key lighting that picks him out of his environment.

In addition to this abstracting tendency, Uchida fully exploits the vast spaces of his locations, broadening the scale of action to epic proportions. A lovely example is the scene in which Otsugi, working in the fields near a river, engages in a shouted conversation with several of her girlfriends who are being ferried across the river in the distance, and who urge Otsugi to join them as they travel to lucrative work in the city's weaving mill. Uchida alternates between closeups and vistas of the gray river valley, casting Otsugi's internal conflict in majestic, geographical terms.

Murnau too combined a strong sense of space and expressionist elements, and after a while I started to think that Uchida's affinities with Murnau were not merely superficial. For both directors, space is less a realist element, to lend a level of documentation to the drama, than it is an opportunity to create a tension between concrete reality and a heightened abstraction of the composition. A few variations on this idea:

•  When Uhei and Kanji's son Yokichi (Donguriboya) accidentally start a fire, Uchida composes so that the fire fills two-thirds of the screen, with Uhei's and Yokichi's efforts to extinguish it confined to the screen's upper left corner: the composition reconceives the drama in pictorial terms.

•  A long shot of a farmhouse of village women preparing food for a wedding is invaded from the left of the frame by the village men, who infiltrate every part of the image, linger to get food, then withdraw. The mundane reason for the men's arrival is nearly displaced by the clearly rendered drama of the image's transformation.

•  Hiding from the authorities, Kanji is completely invisible in a barn: we hear the voice of Kanji's employer trying to locate him and announcing the departure of the authorities. Finally Kanji enters the frame from the side of the barn and opens the barn doors, so that Kanji's employer and her companions are revealed in center frame. Making the world manifest in this fashion is as much Méliès as Lumière: the complete transformation of the image is the goal of the shot.

Resemblances to Murnau notwithstanding, Uchida projects an eclectic temperament, not shy about alternating between Russian montage and Toland-style deep-focus master shots, or between emotionality and formalism: he seems driven to make every scene a coup. We can only hope that someday we'll see a complete enough print of Earth to assess it properly from a structural point of view. On the basis of this and the only other 30s Uchida I've seen, the remarkable 1933 genre exercise Policeman, I'm guessing that Uchida's 30s work, rather than his 1955-1970 period, would best make the case for him as a major director.

If only we could talk openly about the online sources that supply films like Earth, we could rhapsodize about an amazing second childhood for film buffs, in which fan subtitling is unlocking a seemingly endless supply of treasures from foreign countries, and sheer accumulation is creating archives that dwarf any brick-and-mortar institution. But we can't talk openly.