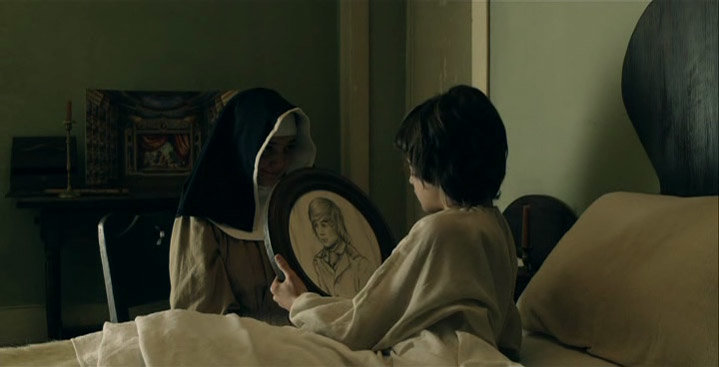 When the camera moves in Raúl Ruiz's Mysteries of Lisbon (a film that manages to be baroque, Gothic, Expressionist and modernist at all once), it moves so weightlessly, relentlessly and unexpectedly that it seems as though it might at any moment pass—Fincher-style—through a wall. And sometimes it actually does. It performs the trick it's been hinting at. It slides sly, unshowy, snake-like from one room into another without missing a beat of the action.

For example: A priest and a boy are sitting in the waiting room of a country estate. The boy stands up to look at some paintings that are hanging on the wall, and Ruiz cuts from the boy's perspective of the paintings to some reverse shots of him to some vague and distorted images (suggesting "memories" in '40s shorthand) and then back to the wide shot of the waiting room—the trusty, musty old master shot (or so we think). A man enters the room and asks the boy and the priest to come with him, but instead of continuing with the editing rhythm (close-up, reverse, wide, close-up, reverse, wide) the scene has already set for itself, Ruiz opts to stay with that familiar wide shot. The camera then softly skates through the wall to a drawing room on the other side, where the boy and priest are met by a woman. The woman asks the two to sit down, and the camera proceeds to shift back and forth between different views of the table at which the three are seated for the next three minutes.

Through these kinds of unexpected, playful movements—which upset the rhythm of the images while keeping with the rhythm of the plot (in the above-mentioned three minutes, the camera swings like a pendulum as secrets are revealed)—Ruiz cultivates an air of possibility. Plot twists trickle so steadily that it eventually starts to seem like any goddamn plot twist is possible; the images, in turn, suggests that any change of angle or perspective might be possible, too. A fluid camera suggests a fluid world. The movie's a catalog of glides, swivels, cranes, pivots, changes in angle,  and dolly creeps—but also discoveries, foreshadowed secrets, confessions, flashbacks and (of course) mysteries. Too liquid to be called a labyrinth, it's a series of identities, candles, death-beds and mirrors that the camera moves around, toward, through. Ruiz's style—always chimeric, capricious, game-like—takes on a paradoxical form here: it's rigorous in its devotion to elasticity.

Besides Ruiz, the world of Mysteries of Lisbon is governed by two Brancos: Camilo Castelo Branco (1825-1890), prolific and influential writer, and Paulo Branco (b. 1950), prolific,  influential producer and a general stand-up guy of cinema (besides his long-standing associations with Ruiz and Manoel de Oliveira, he's also had a hand in Der Rosenkönig, Maine-Océan, Casa de Lava, Four Nights with Anna, Changing Times, etc., etc.). Doomed Love, another Branco adaptation produced by Branco, is a film where time itself often appears fluid—or at least pliable—in a roundabout, theatrical way (one shot comes to mind: an immobile long take of the inside of a convent where several minutes of on-screen time serve as several hours; no undercranking is used to achieve the effect, just good ol' dialogue). In Mysteries of Lisbon, though, it's the characters who are pliable. They're all made of rubber; their identities can be stretched if necessary.

Tricks (narrative, conceptual, even technical—check out those split diopters!) being a Ruiz specialty, the greatest trick of Mysteries of Lisbon is that it appears to be (and everything merely appears to be; Ruiz's great big authorial clue is the main character's prized diorama of a theater) constantly peeling away layers of a mercurial world, where even familiar objects (like the aforementioned diorama) can change in meaning from one shot to the next. That's pretty much how Ruiz handles the big "finale" (or, just as accurately, "dissolution"): three shots of the same objects and character, assigned different purposes in each iteration. Everything in this film is at once malleable and permeable—or is that preamble? Because Ruiz's final trick is to suggest that—in a film that seems to constantly be on the verge of finally revealing its great inner secret, only to reveal another secret that just might lead to the secret—what's more important than the layers is why the layers are there to begin with.