Trees of Syntax, Leaves of Axis (2009, 35mm, 10 minutes, colour, sound) by Daïchi Saïto, screened at the Lantaren Cinema during the Rotterdam Film Festival, as part of the strand, 'Exercises in Film'.

"I paint as I see, as I feel, and I have very strong sensations." —Paul Cézanne

"The lyrical film postulates the film-maker behind the camera as the first-person protagonist of the film. The images of the film are what he sees, filmed in such a way that we never forget his presence and we know how he is reacting to his vision. In the lyrical form there is no longer a hero; instead the screen is filled with movement, and that movement, both of the camera and the editing, reverberates with the idea of a man looking. As viewers we see this man's intense experience of seeing." —P. Adams Sitney

Images, projected at a speed that would define them as "fleeting" (or, when they rest in stasis, seeming to vibrate), frame-by-frame (as they were edited), as if "an image beckons another image," driven to their respective deaths that is represented by the appearance of the black screen which threatens every cut. The filmmaker has ventured into the forest which happens to be a park in Montréal, Canada, and he simply films, on Super-8 and 16mm film (material originally used for an earlier film), the maple trees he encounters—

(trees that remain subjects of an eternal fascination among experimental filmmakers, perhaps because of their state(s) of coexistence, transformation, betweenness: between the stasis of the trunk and movement of the leaves; between the durable and the fragile; the ever-transforming coexistence of textures and colours; between the earth, from which they emerge, and the skies, to which they aspire...)

—images which must then represent this encounter with nature through the use of another encounter, in the darkroom: the film undergoing hand-processing, where certain elements remain beyond the control of the filmmaker, subsequently rephotographed with an optical printer, and edited frame-by-frame (as they move). After all, viewing a film is also bearing witness to its material creation.

Because we are doomed to forever classify and compare: Daïchi Saïto's Trees of Syntax, Leaves of Axis is seemingly in the tradition of the structural film, albeit one that merely "uses" certain tropes that the spectator identifies as belonging to the structural film (emerging, for example, from the constant use of the black screen, despite the destroyed duration) to arrive at an absolute poetic, or "lyrical," or, certainly, a musical, sensibility. (The ecstasy remains uncalibrated in Saïto's film, and we witness rhythms liberated...) Kurt Kren, for instance, has also filmed trees for the entirety of some of his short films, capturing their fragility, and transforming it to a rhythmic vibrancy that is specific to the medium of film: 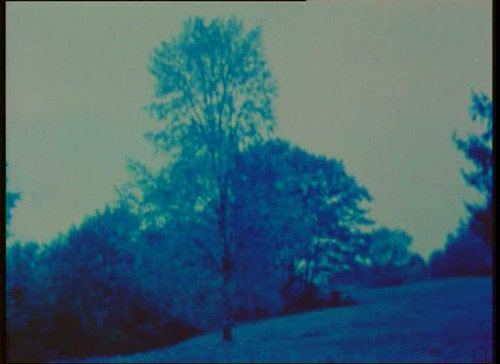 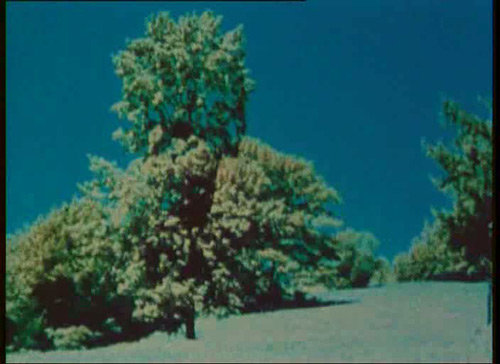 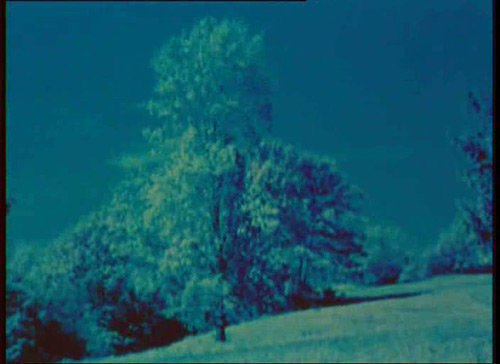 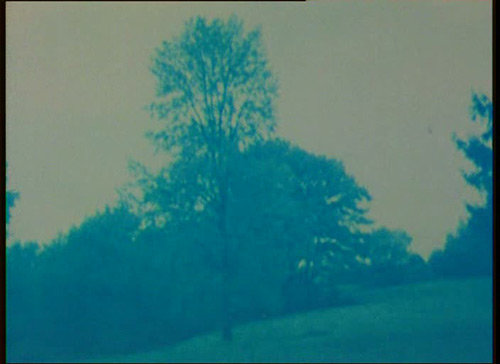 The organisation of space in counterpoint to waves of sound: In contrapuntal, yet deeply and movingly harmonious, accompaniment to the images in Saïto's film, is the largely-improvised violin score, "Hues of the Spectrum", by Malcolm Goldstein. Such is this unique negative-convergence between image and sound—sense-affirming (experience), and thus, life-affirming (existence)—that the spectator is subject to the impressionistic mirage of listening to the images, of seeing the sounds. The sensorial "absence" of either (whether in silence, which is also a sound here, or with the black frame, which is also an image) threatens a formal death, experienced by the spectator, as the image+sound complex vibrates, dances, lurches towards its abyss. 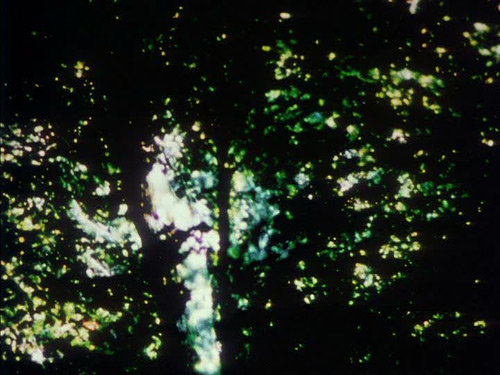 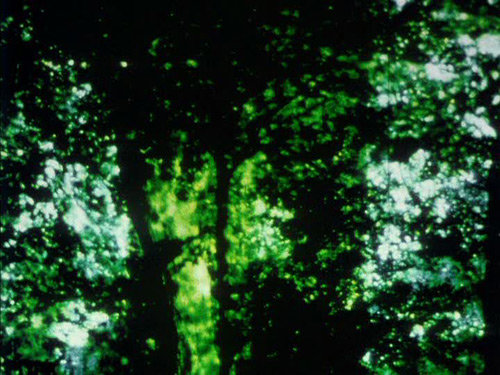 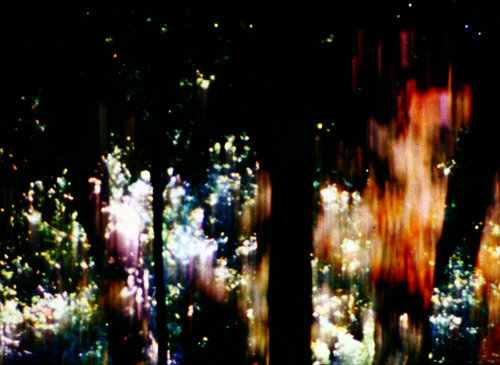 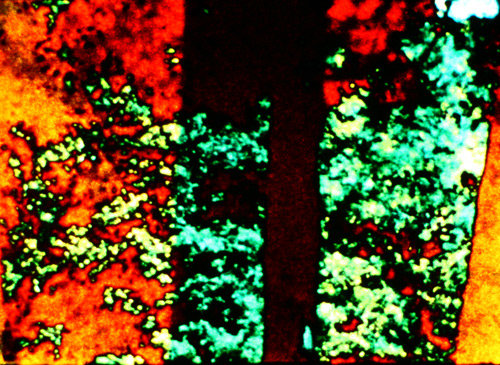 Above: Images from Trees of Syntax, Leaves of Axis.

This is the second film on which Saïto has collaborated with Goldstein on the sound. Their first film together, the equally astonishing, All That Rises (2007), is, like Trees of Syntax..., an impressionistic document of a specific space, an experience of a space that comes to be defined by the time it takes the film to run through the projector, by the rhythmic movement of light/colour across the screen, by its breathing. A space rendered conspicuous by the montage—which mimics breathing rhythms, when it is not mimicking a heart beating at its most excited—of trees in seeming proximity to each other (amidst occasional flickers of the sky and earth: remnants from another world), in the newer work.

"Vision is not fact but an aggregate of sensations. Vision creates its own efforts toward realization; effort does not create vision." —Carolee Schneeman

As the image manifests itself before us, we ask of it: "What is there to see?" The film becomes an invitation for the spectator to actually experience the trees as the filmmaker's experience of the sensation of nature, feel their material ghostliness, their (absent) presence, when the black spaces occur, or when the spectator’s eyes are closed to Saïto's flickering images. An imprint of the image just passed, "destroyed" by its projection, lives on in the human eye and mind as far as memory permits, as bright colours slowly dissolving into black fluid. Light as nature’s means of transferring energy through space, and indeed, matter.