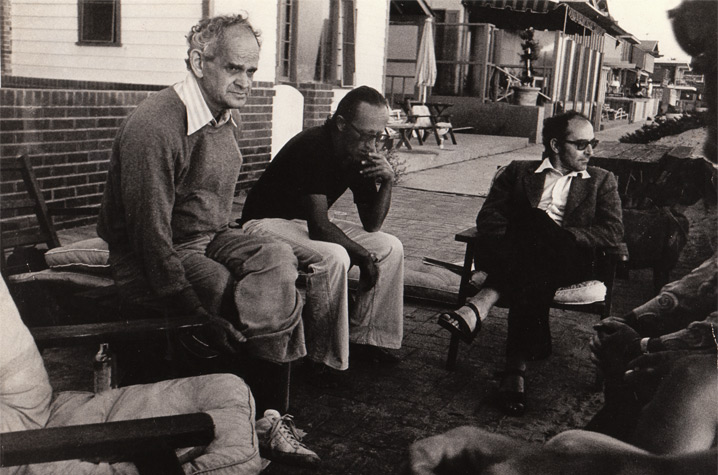 Above: Manny Farber, Heiner Muller, and Jean-Luc Godard in California in the 1970s.  Photo by Wim Wenders.

The Farber equation is never simple.  That sentence is a variation on a Samuel Beckett line I've wanted to adapt for an essay, review, biography, even poem, ever since I read the original in college. As the opening sentence to his first book Beckett wrote, "The Proustian equation is never simple," and from the outset I was comforted by the promise of persistent, accelerating, perhaps eternal difficulty and puzzle.  But as over the years I repeated to myself the sentence, "The Proustian equation is never simple," at the blind start of any obstinate piece of writing, I found myself startled by Beckett's conflation of "Proustian" and "equation": his brisk juxtaposition of involuntary memory and the painstaking working through of quantities and variables.

I never found a space for the sentence because the bewilderment the arrival of Beckett's six words in my head customarily signaled turned out always to expose only a lack of preparation or confidence, a private anxiety that refused to intersect the subject at hand. But for Manny Farber's film criticism and paintings, the introductory oddities, muddles, crises, contradictions, dead ends, multiple alternatives, and divergent vistas spiral along "chains of rapport and intimate knowledge" (to quote his essay on Don Siegel) into still more tangled and intractable mysteries; following Beckett on Proust, the Farber equation creates “a sustained, powerful, and lifelike pattern of dissonance" (to quote his essay on Preston Sturges) that insists on insinuating the steeped-in-time personal and sensual alongside the abstractly intellectual, formal, and conceptual.

For much of his writing life Farber was branded an advocate merely of action films and B-movies––as though it might not be distinction enough to have been the first American critic to render serious appreciations of Howard Hawks, Samuel Fuller, William Wellman, Raoul Walsh, and Anthony Mann. Yet Farber resisted many noir films of the 1940s as inflated and mannerist––“over the past couple of years, one movie after another has been filled with low-key photography,” he complained in 1952, “shallow perspectives, screwy pantomime, ominously timed action, hollow-sounding voices.” Farber also was among the first critics to write about Rainer Werner Fassbinder, an early champion of Werner Herzog, and an exponent of such experimental directors as Michael Snow, George Kuchar, Andy Warhol, and Chantal Akerman.  Village Voice film critic J. Hoberman told me that upon discovering Farber in college, he was “stunned by how eclectic Farber was, how wide-ranging his references were. I wasn’t that interested in commercial films. I was interested in underground movies, the French New Wave, and such B-movies as existed. I would read Andrew Sarris, I would read Kael, but I felt they were operating from a different perspective––whereas Farber seemed to me to be a much hipper intellect.” As Hoberman quipped in the introduction to his collection Vulgar Modernism, Farber played "both ends off against the middlebrow." 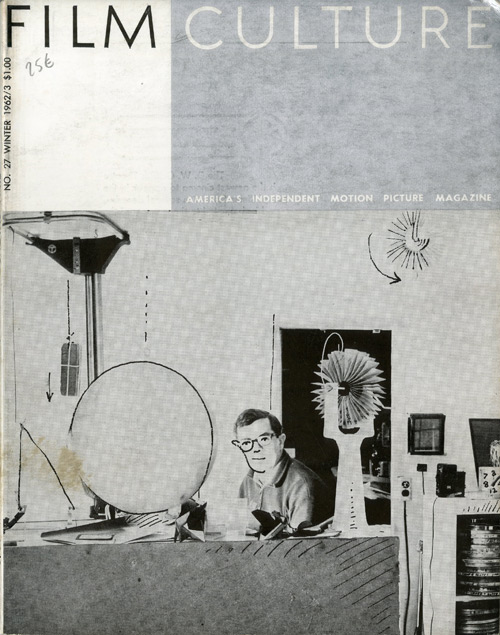 Still, Farber's notoriety as a film critic largely resides in his B-movie–steeped, careering slams of the 1950s and '60s––"The Gimp" (for Commentary, 1952), "Underground Films” (also for Commentary, 1957), "Hard-Sell Cinema" (for Perspectives, 1957), and particularly "White Elephant Art vs. Termite Art" (for Film Culture, 1962). The termite/white elephant essay cashiered "masterpiece art, reminiscent of the enameled tobacco humidors and wooden lawn ponies bought at white elephant auctions decades ago." White elephant directors "blow up every situation and character like an affable inner tube with recognizable details and smarmy compassion" or "pin the viewer to the wall and slug him with wet towels of artiness and significance." Farber instead tracked the termite artist: "ornery, wasteful, stubbornly self-involved, doing go-for-broke art and not caring what comes of it." Termite art (or "termite-fungus-centipede art," as he also bottled it) is "an act both of observing and being in the world, a journeying in which the artist seems to be ingesting both material of his art and the outside world through horizontal coverage." Against the white elephant “pursuit of . . . continuity, harmony," termite art mainly inheres in moments––"a few spots of tingling, jarring excitement" in a Cézanne painting where the artist “nibbles away at what he calls his 'small sensation'"; John Wayne's "hipster sense of how to sit in a chair leaned against a wall" in The Man Who Shot Liberty Valence; and “one unforgettably daring image” in Les mistons, “kids sniffing the bicycle seat just vacated by the girl in the typical fashion of voyeuristic pornographic art.” 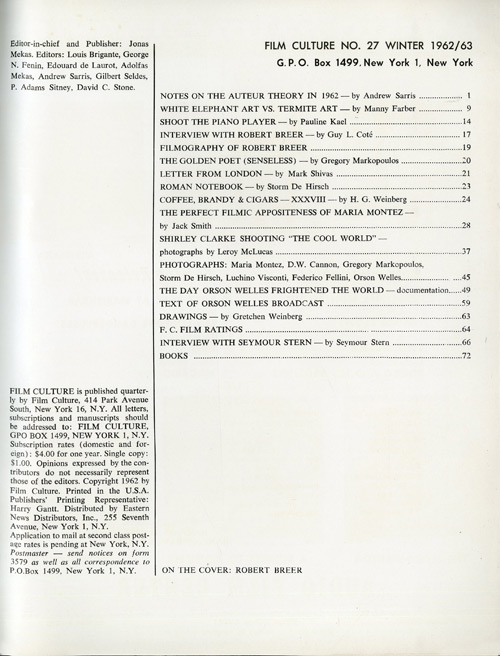 Above: the index to the Winter 1962/63 issue of Film Culture, with an article by Andrew Sarris, followed by Farber, followed by Pauline Kael.

Farber’s attention to vivifying details and gestures rather than the encrusted masterwork reminds me of Robert Frost in his Paris Review interview. “The whole thing is performance and prowess and feats of association,” Frost asserted of his poems. “Why don’t critics talk about those things––what a feat it was to turn that that way, and what a feat it was to remember that, to be reminded of that by this?” Farber similarly personalized his termite/white elephant division for the introduction to Negative Space: “The primary reason for the two categories is that all the directors I like . . . are in the termite range, and no one speaks about them for the qualities I like.” As termite artists he indicated a diversity of painters, writers, photographers, producers, and actors, which encompassed Laurel and Hardy, Otis Ferguson, Walker Evans, Val Lewton, Clarence Williams, J. R. Williams, Weldon Kees, Margie Israel, Isaac Rosenfeld, sometimes James Agee, and film directors Howard Hawks, Raoul Walsh, William Wellman, Samuel Fuller, Anthony Mann, and Preston Sturges. 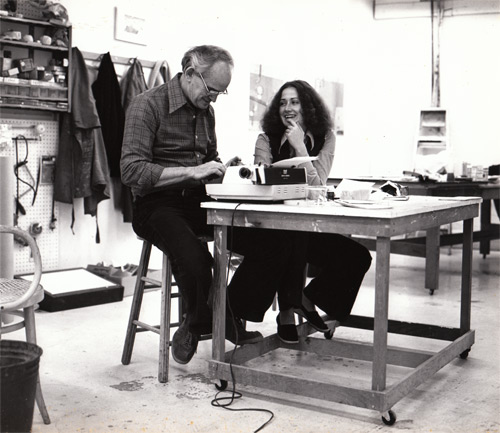 Above: Farber and his wife Patricia Patterson.

Farber published his last film essay, “Beyond the New Wave: Kitchen Without Kitsch,” in Film Comment, in 1977, a few years after he moved from New York to San Diego with his wife, the artist Patricia Patterson, to paint and to teach film and painting at the University of California. Among his reasons for abandoning criticism, as he told me: "I no longer wanted to be viewed as the film critic who also paints." In New York Farber traveled among the late 1930s generation of New York writers and critics, many aligned with Partisan Review––Clement Greenberg, Agee, Saul Bellow, Jean Stafford, Mary McCarthy, Kees, and Ferguson, among others.  For his reviews and essays for The New Republic, The Nation, Time, Commentary, Commonweal, The New Leader, Cavalier, Artforum, and City, Farber manifested overt and enduring affinities particularly with Ferguson, Agee, and Greenberg. Yet his approach to the actual writing could not be more divergent, incongruous, maverick, perverse. Where Greenberg aimed at what might be styled a fastidious lucidity, even as he traced the destruction of representation, and Ferguson and Agee offered distinctive variations on conversational lyricism–– Ferguson tilting toward 1920s jazz, Agee canting into rhapsody––Farber is perhaps the only American critic of modernism to write as a modernist. He emerged as the boldest and most literary of film and art critics of the 1940s and '50s by coursing along almost stridently anti-literary tangents. Farber advanced a topographical prose that aspired termite-fashion through fragmentation, parody, allusions, multiple focus, and clashing dictions to engage the formal spaces of the new films and paintings he admired.

Farber once described his prose style as "a struggle to remain faithful to the transitory, multisuggestive complication of a movie image and/or negative space." No other film critic has written so inventively or flexibly from inside the moment of a movie. His writing can appear to be composed exclusively of digressions from an absent center. One of his standard moves is a bold qualification of a qualification, in a sequence of vivid repositionings. His strategies mix self-suspicion, retreat, digression, and mulish persistence, so that Farber (once more Beckett-like) often proceeds as if giving up and pressing on simultaneously. There are rarely introductory overviews or concluding summaries; his late reviews in particular spurn plot summaries and might not even name the director of a film, and transitions seem interchangeable with non sequiturs. Puns, jokes, lists, snaky metaphors, and webs of allusions supplant arguments. Farber wrenches nouns into verbs (Hawks, he writes, "landscapes action") and sustains strings of divergent, perhaps irreconcilable adjectives such that praise can look inseparable from censure. Touch of Evil, he writes, is "basically the best movie of Welles's cruddy middle peak period." He will cast prickly epigrams––“Huston is unable to countenance the possibility of every gentleman being a murderer at heart, preferring instead every murderer being a gentleman at heart.” His sentences will dazzle through layers of poise and charm:

"What is so lyrical about the ending [of Don Siegel’s The Lineup], in San Francisco’s Sutro Museum, is the Japanese-print compositions, the late afternoon lighting, the advantage taken of the long hallways, multilevel stairways, in a baroque, elegant, glass-palace building with an exposed skating rink, nautical museum, and windows facing the sea with eye-catching boulders."

But Farber qua Farber typically arrives at a kind of backdoor poetry: not “lyrical,” or traditionally poetic, but original and startling. This is Farber on How I Won the War: "At its best, it has a crawling-along-the-earth cantankerousness and cruddiness, as though the war against fascism were being glimpsed by a cartooned earthworm from an outhouse on a fake hillbilly spread somewhere in the Carolinas." Or here he invokes the “underground” theaters along 1950s Manhattan’s 42nd Street:

The hard-bitten action film finds its natural home in caves: the murky, congested theaters, looking like glorified tattoo parlors on the outside and located near bus terminals in big cities. These theaters roll action films in what, at first, seems like a nightmarish atmosphere of shabby transience, prints that seem overgrown with jungle moss, sound tracks infected with hiccups. The spectator watches two or three action films go by and leaves feeling as though he were a pirate discharged from a giant sponge.

Many of these writerly aspects are on display in Farber's magnificent Hawks piece, originally published in Artforum in 1969.  The essay manages neither a welcoming preface nor a resolving conclusion––the start and finish are all canny abruptness. The first four long paragraphs compose a docket, or roster––one Hawks film for each paragraph. Farber situates Hawks inside a vast allusive complex––Piero's religious paintings, cubist composing, Breughel, F. Scott and Zelda Fitzgerald, Tolkien, Muybridge, Walker Evans, and Robert Frank; almost a kind of collage of allusive appropriation. Many phrases describe Farber’s own writing practice and anticipate the complex, tangled surfaces of his future paintings: "secret preoccupation with linking," "builds detail on detail into a forbidding whirlwind," "each one bumping the other in an endless interplay," "many plots are interwoven," "the idea of topping, outmaneuvering," "intricately locked humor," "the ingenuity of its pragmatic engineering," and "the geography of gesture." And, rare for Farber's prose, there is an explicit autobiographical reference––to the border town of his birthplace. The seaport in Only Angels Have Wings might be good, he writes, for a Douglas, Arizona, high school production.