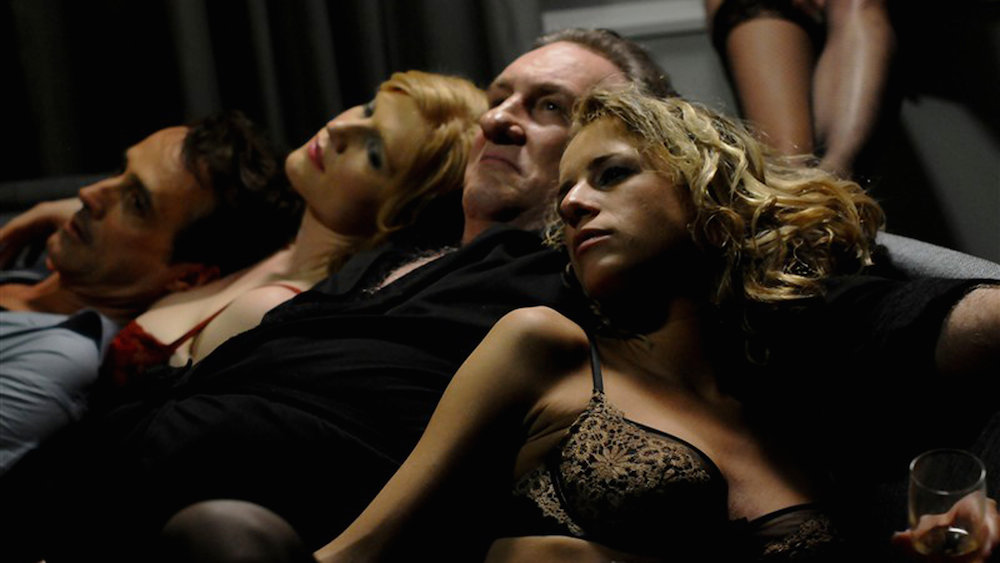 After days if not months of intense marketing-oriented buzz and so-called provocative statements about the distribution strategy, the film is eventually out. From a French perspective, as stated by most of the reviews, the avalanche of comments about the "DSK case film" had already reached the close-to-indigestion stage.  A deep sigh of relief comes out of the comments ("It's finally over, let's move on").  The happy few who commented before Cannes in a mix of embarrassed clichés (from worn-out "film as documentary about its actors" to not-really-a-surprise "film about addiction") and careful praises of Ferarra's overall inspiration, are now replaced by others who, after the Cannes screening, qualify the whole operation as a cover-up bluff for a rather mediocre effort, basically half soft-porn, half pantomime. On the other side of the non-barricade, the usual post-modern gang's  support of Ferrara, praising (unknowingly?) the most Hollywoodian traits of his talent while showing off their ignorance of European realities (and languages).  Whatever the relevancy of comments, and depending upon which side of the Atlantic you live in, it must be said that if you look for the portrait of a charismatic and brilliant political leader and the story of his final fall after a last act of abuse in a long carrier, nothing in the film will convince you that "this" is DSK, ex-boss of the IMF and virtual French president. "Devereaux" looks more like a half-wit French province businessman on a vacation in the States. Don't look for anything that would place the character anywhere too precise: he has some kind of "power," and that's about it. Yet the second act of the film works with a strong "based on true events" effect, indicating how much Ferrara wants his Depardieu to be DSK: arrest and pre-trial are staged with real protagonists in real locations, in a dry realistic style that gives the film its best moments, eventually succeeding in the combination of fiction and reality, and making the best of Depardieu's commitment. The same goes for the dry and implacable "core" scene with the chambermaid: the man is guilty, and this last abuse is the result of his total sliding into oblivion of his own acts, the ultimate sign of his addiction, sick arrogance and absence of consciousness.

So much so that in retrospect, the previous debauchery scenes (with almost all possible petit bourgeois clichés about hookers and champagne) look all the more tedious, with their unconvincingly grunting and panting Depardieu, sometimes dangerously close to a personal "I'm too old for that shit" line . So much so that the flashbacks of Devereaux's previous abuses look all the more clumsy and useless (telenova style in repetitions for the hearing impaired).  So much so that the scene between Devereaux and his daughter (after he abused the chambermaid) flops as a "good idea that did not come through."

Blame all this on a sloppy editing, an obstinate clinging to a visibly unconcluded voyage along kilometers of material. Blame it maybe on an inconclusive production relationship.

If a "documentary about the actor," then, not a particularly original one. French viewers will recognize the actor's favorite mimics and effects, as well as they'll perceive his moments of mere "minimum service." We know our Depardieu. Could it be that Ferrara, fascinated by Depardieu, has let him go free style, without that many indications nor directing (hence the many looks into camera of the actor, as if asking for instructions), happy enough with the exhibitionism and lazy moves of the "monster," unaware of the absurdity of his Franglish dialogs?

Then comes the last act.  Improvisation rules in the Kammerspiel scenes between Devereaux and his wife (Ms. Bisset) in their Tribeca mansion (the real one, mind you). Fact is that Depardieu really starts to act when confronted with Bisset, who visibly challenges him to get down to work and respond. But why have them speak English with a few French words here and there, why let him improvise sentences like "I want un coup de rouge"?  Some kind of exotic trip into Frenchness (the still often seen Maurice Chevalier syndrome)? And why the pompous formulaic declarations about "human nature" while Lady Macbeth scolds her puppet and political commitment is stripped bare of its illusion to reveal a man's suicidal impulses…

All the above doubts, as so often in film criticism, can be turned inside out to prove how subversive and inventive Ferrara may be. What will be more difficult to turn inside out, though, is the Mantis syndrome for the wife's character. Simone (Ms. Bisset) is first shown at a Parisian socialite dinner where she is praised for her "generosity towards Israel." The scene is long enough to make it a point. At the Tribeca mansion, Devereaux insinuates that his wife's family fortune would come from unclear activities linked with WW2. And this whole third act aims essentially at pointing out how much she pushed him, how much she wanted him to be president, how much she cornered him with her own power…and money. Now, if this is not a set of nauseating equations and allusions …Was this all about an abusive Jewish (hence rich?) Mom bullying her boy into suicidal sex-addiction? Let's back off. And because it is Ferrara, let's pretend that this also could be turned inside out. That the whole film tends towards a sharp, uncompromised, experimental, not politically correct and (why not) Shakespearian moral play. But then, this is where one has to question once again the film's editing,  its unbalanced length and its overall sloppiness…  its linear structure that leads from criminal effects to cherchez la femme causes. And therefore to question the very sense and interest of the project: let us not think too much about politics and power, it may well all depend upon a woman-mother's attitude towards her man-son. She is the motive for the not-dealing with addiction ("the analyst you sent me to"). She is the key to the question of power ("What a disaster! What a waste!" she says).

No thanks, then, to Ferrara for conveying in the end such a heavily conformist vision.

Quite a Weltanschauung problem this film has, would Master Jedi say.