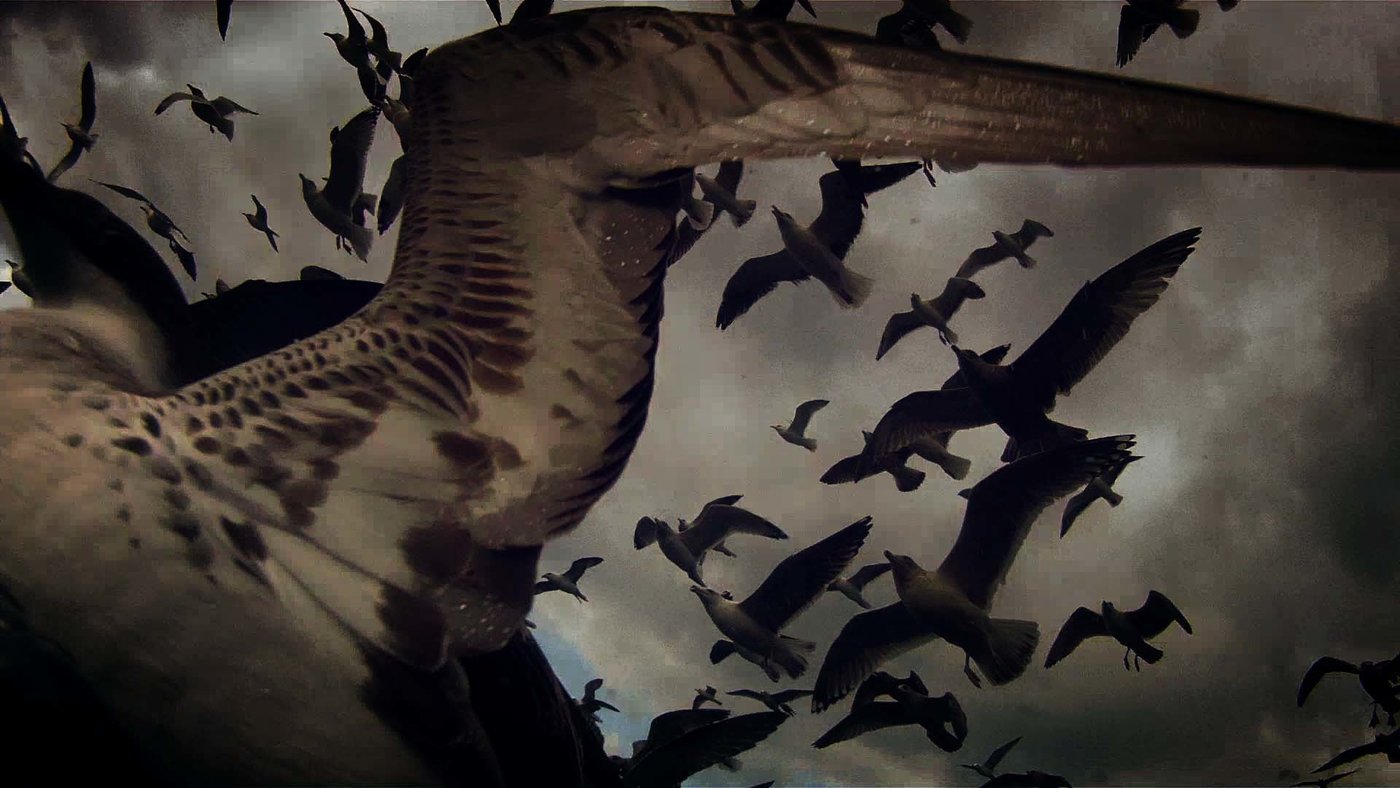 Leviathan is yet another rich project hailing from the Harvard Sensory Ethnography Lab, which has brought us fascinating, anthropologically-driven experimental work since its inception in 2007, including award-winning films like Sweetgrass (2009) and Foreign Parts (2010). The lab was formed by Lucien Castaing-Taylor, who co-directs Leviathan with Véréna Paravel. The film takes place on a fishing boat, shot on cheap, tiny digital cameras that are attached to fishermen, dead fish and even thrown overboard on tethers. Just as Abbas Kiarostami's Five was a film that somehow articulated the essence of Yasujiro Ozu with its patient observation of the slow and beautiful ebb and flow of life, Leviathan does the same, though unconsciously, for the late Tony Scott with its kinetic, often aesthetically stunning visual noise. It is a film that evades description with its originality, something which is brought up in the following exchange I had with Véréna Paravel at the Locarno Film Festival, where the film debuted in competition.

NOTEBOOK: Can you describe how Leviathan was filmed and the cameras you used?

VÉRÉNA PARAVEL: We started doing ethnographic research around the harbor in New Bedford, the former whaling capital of the world, using big cameras, EX3, EX1. We were interested in documenting an industry which economy goes back to the bay colony. Then, we went at sea for the first time with the idea of dispersing other small GoPro cameras between the fishermen and us. We lost all of our bigger cameras at sea but at the end, those small cheap cameras that we used were the most interesting tools for us to be able to work with the fishermen and to go even beyond that, to share and spread the perspective also to the catch and the elements… ﻿

NOTEBOOK: …To express the experience of all these different points of view.

PARAVEL: Exactly. We didn’t want the film to be an imposition of our own intentions.

NOTEBOOK: It’s more like an investigation, to experiment with placing the camera in these different roles and finding out what the perspectives are like.

PARAVEL: Yes, it was a constant search to capture the experience of being there. We didn’t have any pre-conceived statement in mind. Lucien and I share this belief that filmmaking is not for communicating a single idea, it’s a form of engagement with the world. ﻿

NOTEBOOK: And it’s very visceral, this engagement, it’s the process of experiencing.

PARAVEL: The film itself is a very honest reaction to being at high seas. We had a discussion for less than a minute about what to do. The film is a gesture, a physical and emotional reaction to our experience, almost like an epileptic crisis or something—an aesthetic translation of what we have been subjected to. ﻿

NOTEBOOK: How would you describe your experience of being on the ship? Frightening?

PARAVEL: A lot of fear, yes. A lot of physical pain. Being crushed by the magnitude of nature, entangled in it. Feeling fully alive. And an inch away from death. ﻿

NOTEBOOK: I think we actually get a sense of that pain watching the film.

NOTEBOOK: For me watching it, there was sense of alienation from the environment. Everything looked so strange to me.

PARAVEL: Maybe because we attached those cameras to the fisherman themselves the result is an embodiment of this very cephalic point of view. It’s not only the body that’s moving, you’re literally in their head, you’re with them, you’re a part of their actions, but your spatial and temporal orientation disappears and this is how you feel on a fishing vessel. So, we wanted to privilege this unique perspective, but we didn’t want to limit it to the fisherman. Unlike in most documentaries where it’s only the human subjects’ perspective, we wanted to give the same ontological weight to the fishermen and their catch and it spread to the elements as well. ﻿ 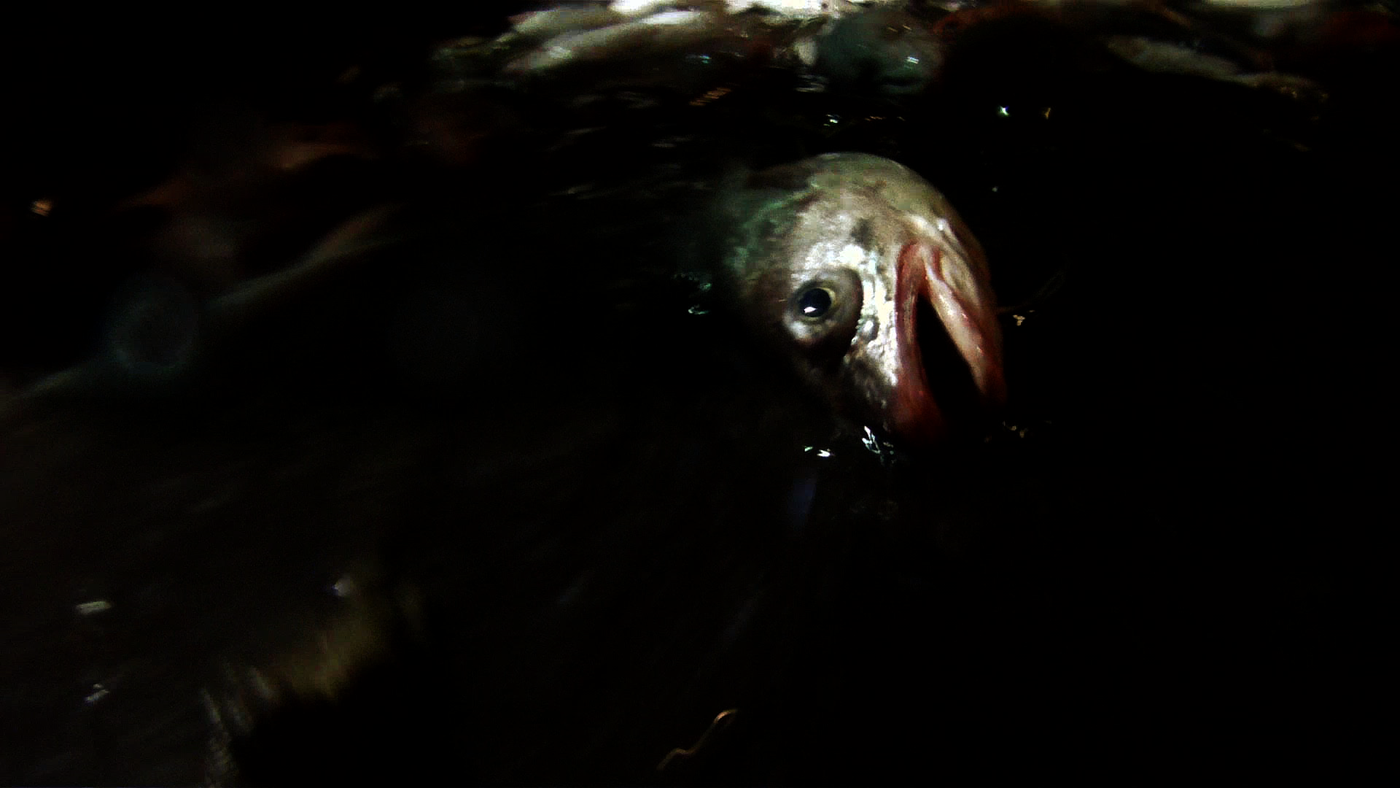 NOTEBOOK: How long did you spend at sea?

NOTEBOOK: Did it get easier or harder each time?

PARAVEL: It depends. Some trips were really, really difficult for us. Some were easier. In the winter when it’s really cold and the sea is really rough, it’s physically challenging. Lucien was unfortunately very sick. We knew it was worth it though, that we were doing something… ﻿

NOTEBOOK: …New, completely. As a film critic I try to contextualize the movies I see, and part of that is comparing new films to other work and trying to relate it in that way, to find precedents, and this is such a challenging film to do that with. If I told you of the filmmakers I thought of while watching your film, you might think I’m crazy. They’re only vaguely linked, but nevertheless Leviathan evoked the following names for me: Stan Brakhage, Tony Scott [Note: this conversation took place before his passing] and most loosely Werner Herzog, only for the way he can render our world alien to us like you and Lucien do in your film. That’s the closest point of comparison I could find, was a synthesis of very specific aspects of these directors’ work: motion, strangeness, disorientation and visual and sensory pleasure. It doesn’t come close, but I think that illustrates how unique Leviathan is.

I noticed a thank you to Claire Denis in the end credits?

PARAVEL: She was the first to see a really rough, rough, rough cut and it was a very important moment for us because we didn’t and still don’t know what the film is—we know it’s a monster. She sat, watched the film, and she was touched and discombobulated by it, in a way that we could strongly feel. Feeling that in her gave us the energy and the strength to continue our project. She was very encouraging. We, of course, admire her work. ﻿

NOTEBOOK: Me too, very much, and now that you mention it, something in the motion of L’intrus also feels vaguely reminiscent of your film, and some of the noise on the soundtrack feels like a cousin to the noise in Leviathan. Another silly comparison! [laughs]

PARAVEL: [laughs] You’re not the first person to say “I can’t compare it.” Maybe it’s better to compare it to painting or poetry, or different forms—

NOTEBOOK: Could you talk about the heavy metal music in the film?

PARAVEL: This is what the fishermen listen to. It’s a heavy metal film. 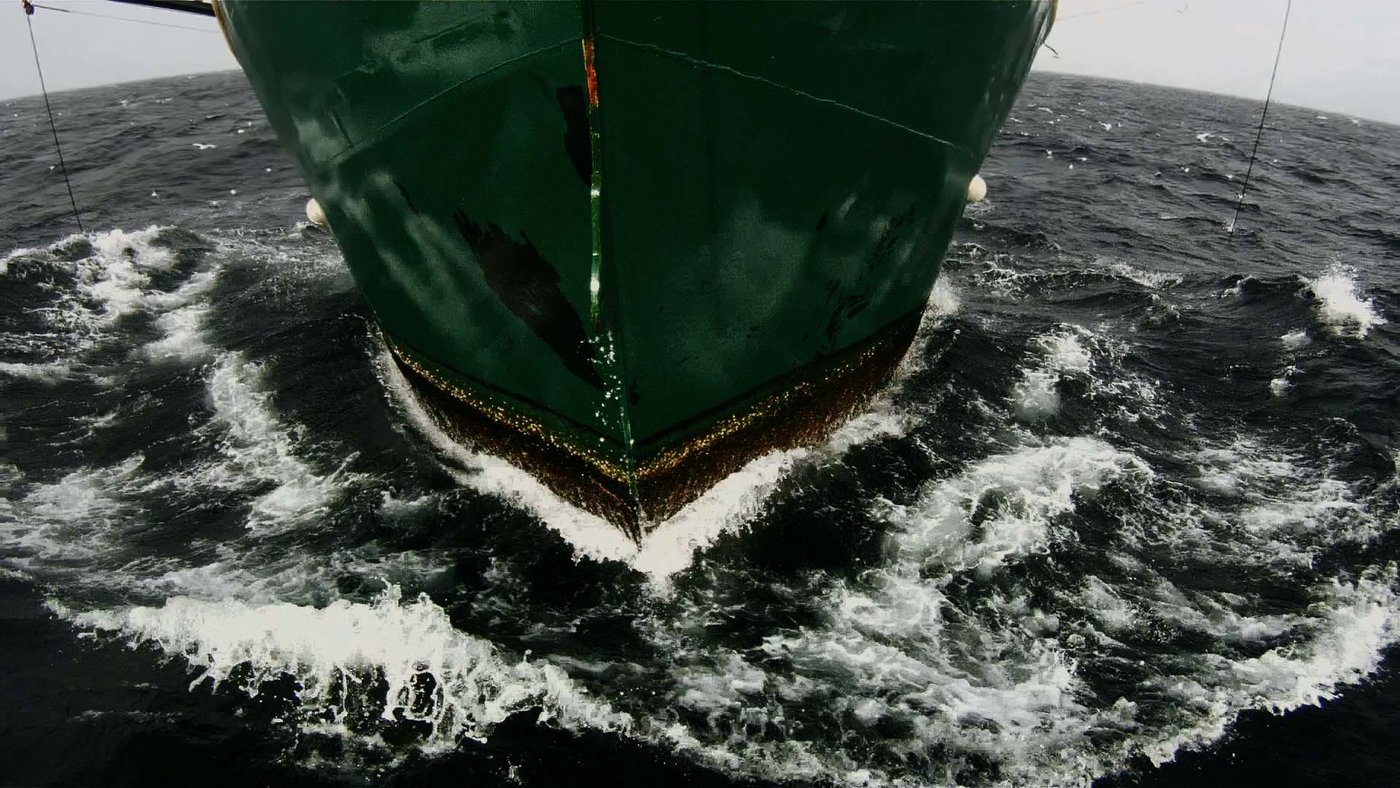 NOTEBOOK: You’ve collaborated with J.P. Sniadecki on Foreign Parts (2010) and now with Lucien Castaing-Taylor on Leviathan. Can you talk about why you like working in partnerships and how it works?

PARAVEL: I wish Lucien were here. It’s our film. To answer your question, we don’t divide the work, we organically share it. With J.P. in the junkyard, we helped each other, we protected each other, we hold each other, passing the camera from hand to hand. With Lucien, it was a real pleasure to share not only the camera and the sound device but also endless beautiful discussions on Leviathan. For us, making a film is about sharing. And anyway, you can not be alone in a junkyard, you can not be alone on a boat, and you’re never alone making a film, read the credits… ﻿

NOTEBOOK: One thing I wish I did is count the number of shots in the film.

NOTEBOOK: As I expected, lower than how it feels as you’re watching it, because there’s an illusion of montage in the movie, from the constant submergence and emergence in and from the ocean—this is what evoked the intensity of Scott for me. It feels like a rapid succession of shots, but sometimes these are drawn out takes, and there’s an automatic-cutting in the interaction between nature and the camera, it’s frenetic.

PARAVEL: They’re long takes, yes. I mean this is true and not true because the first fifteen minutes of the film looks like a single shot, but it’s not. We really worked on fluidity—it is, also, a liquid film. ﻿

NOTEBOOK: Can you talk about the sound design in the film and Ernst Karel? Sound plays a huge role in the film, obviously.

PARAVEL: We recorded with a sound device and we recorded hours and hours of sound but we realized that the sound coming from the little GoPro camera, especially when it was in its plastic case, was—I guess most filmmakers would have gotten rid of it, but we decided to work with it…It’s so disturbing… ﻿

NOTEBOOK: …The digital noise. It’s like in Film socialisme. Godard uses raw digital sound from the scenes on the boat, and it’s noisy but there’s something sensually beautiful about it.

PARAVEL: Absolutely. So, to highlight that, we did our sound and we edited our sound, but at the end we gave Ernst the film so he remixed it and worked with the extra sound from the GoPro camera, and I hope you listened to the end credits because he composed the end credits. We also worked for the first time with another sound designer in New York, Jacob Ribicoff, who has done amazing work. Ernst and Jacob helped bring the film to another level. ﻿

NOTEBOOK: I’ll leave it there, but with one last comment: Leviathan is best seen close to the screen, with the volume as loud as possible.

PARAVEL: Thank you for saying that. 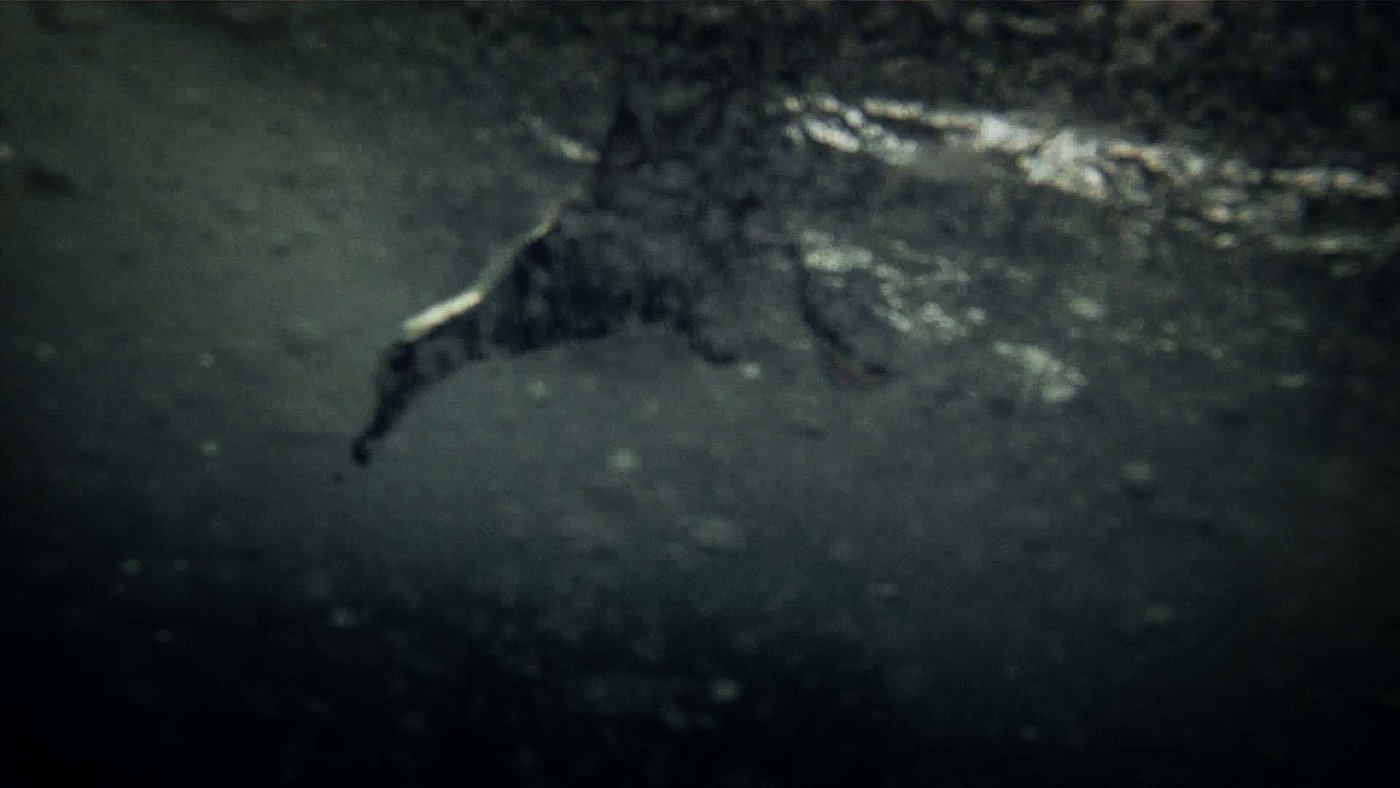