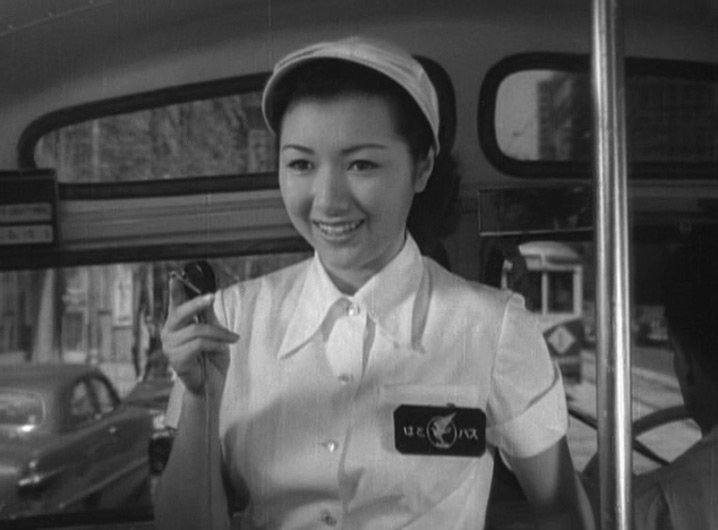 2010 began and ended with the deaths of great octogenarian film artists. Eric Rohmer died on January 11, a few months shy of his 90th birthday; and Hideko Takamine left us on December 28, at the age of 86. In Rohmer's case, death had been waiting in a corner of the room: just a few months before, we had seen Jackie Raynal's 2009 documentary footage, showing the alarming decline of his physical (but not mental) powers over the course of a few months. But it was quite different with Hideko, who was said to be living happily in retirement in Hawaii with her husband, writer Zenzo Matsuyama. Out of the sight of film audiences since 1979, she existed in a sunlit, remote corner of the imagination: there seemed no reason for her ever to die.

The image of Hideko that comes quickest to my mind is a scene from Mikio Naruse's A Wife's Heart (1956) in which she does a broad, funny impersonation of an obsequious waitress. Of course Hideko was a hambone at heart: after all, she was a famous child actress, well paid to show off. All the stranger, then, that she made her lasting mark on the cinema in the company of director Naruse, for whom she tended to restrain her ebullience and project an undemonstrative dissatisfaction and disappointment. Often she seemed to stand to one side of life, dodging the shrapnel from the explosions of one destructive Naruse family or another: most notably in Lightning (1952), where only the focus of the narrative lifts her from the background for most of the film's length; and in Flowing (1956), where glimmers of rage are the evidence of a thwarted emotional life. In her greatest movie, Floating Clouds (1955), Naruse allows the would-be cut-up try to steal the spotlight with her martyr act, so that co-star Masayuki Mori finally learns to chuckle with appreciation at her reflex accusations on her deathbed. For Naruse, the cheery, expressive demeanor of the former child star was best administered in small doses, to hint at an imaginative life overwhelmed by mundane concerns. Did his pessimism provide the extra layer of complexity that turned a gifted performer into a great one? I know too little of her vast career to be sure.