Hollywood Exiles in Europe is a screening series co-curated by author Rebecca Prime and the UCLA Film and Television Archive. 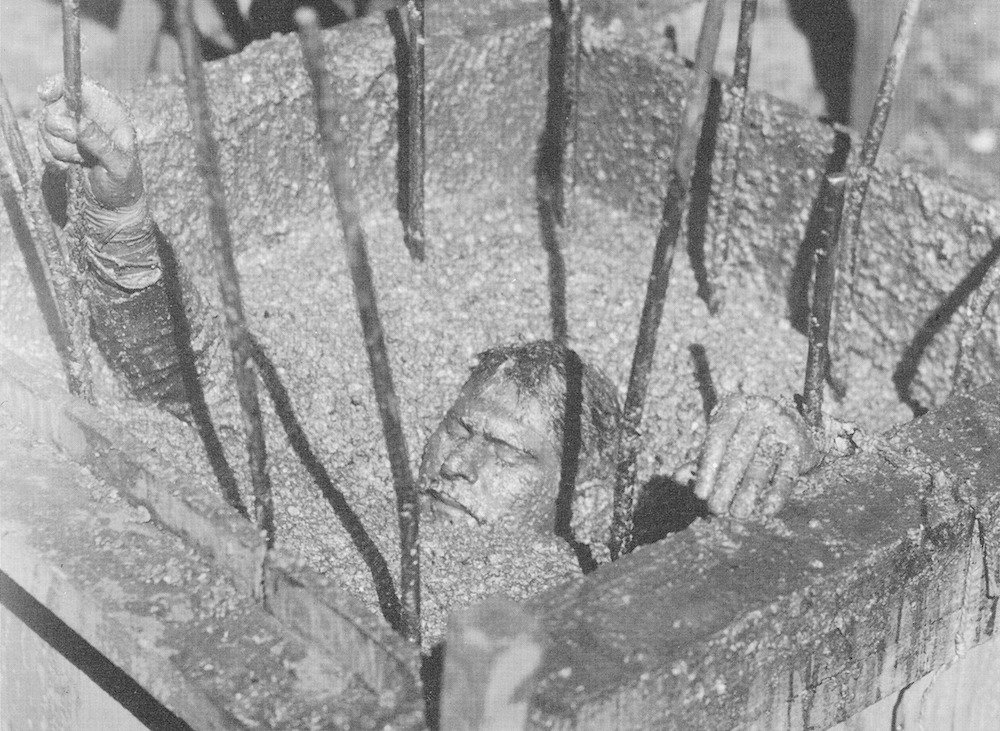 Following a recent presentation of Christ in Concrete (1949) at the Hammer Museum's Billy Wilder Theater, Norma Barzman, wife of the film's late screenwriter Ben Barzman, stated “it was the hope of her husband as well as director Edward Dmytryk that Christ in Concrete would at least explain the motivations of the Hollywood Ten and at best absolve them.”

Production for the film took placed in London during Dmytryk and Barzman's self-imposed exile in Europe following their blacklisting by the United States Congress's House Un-American Activities Committee. When Christ in Concrete (later re-titled Give Us This Day and eventually Salt to the Devil) arrived in American theaters it did so quietly, playing to regional crowds in New York before its hasty exit into a relative obscurity—at least as far as domestic audiences were concerned. While it is often my attempt to separate a film from any historical and political context in order to discuss the aesthetics of what is actually seen,  Christ in Concrete wears its politics on every frame— serving as a reminder that it is often the politics of a film that inform its aesthetics.

We enter the film low—roughly waist height—and remain there for the first ten minutes as Geremio (Sam Wanamaker), a union bricklayer, traverses through an urban environment that is all at once gritty realism and expressionistic flair. Cinematograp her C.M. Pennington-Richards' camerawork here is true populist filmmaking—higher than no man, ever gazing upward. As Geremio approaches his tenement his head turns up to the cloudy, high-contrast sky composited overhead before moving into his building wherein the sky is replaced with ceiling. From the very beginning, Dmytryk makes his audience acutely aware of that which looks down on his characters. This deliberate, fore-fronting form suggests that the true oppressor of “ the working class” is the claustrophobic nature of landscape itself. Christ in Concrete depicts the struggle of a working class family attempting to rise from their current socioeconomic status, and the sum of their goals is represented tangibly by a house in the suburbs they are slowly saving to purchase. For them a better landscape is the end of their struggle.

Yet any attempt at upward motion on their part is met with setback—the blame of which for the most part rests solely on their shoulders. They continue to have babies, drink heavily, and, in the case of Geremio, indulge in an extramarital affair. Theirs is a struggle against oppression. However, more than an objective good vs. evil, oligarchical oppression, it is the way in which the characters perceive and interpret their environment that manifests a sense of struggle against a force greater than themselves. They exist under an oppression of their own creation. Their consumerist notions, which fetishize houses and suburbs, are what drive Geremio and his family towards tragedy.

This, I feel, is what sets the film apart from much of the commercial cinema of the time—the fact that more so than any external force, the true enemy of people’s happiness is the way in which they contextualize their present. While many films of the era feature characters pitted against tangible enemies, Geremio and his wife Annunziata (Lea Padovani) rather than battling a physical or political entity are instead turning their struggles inward—deliberating the cost of one's freedom when compared to the effect it has on the greater stability, or perhaps more importantly the effect it has on one's own definition of freedom. In one particularly visceral moment, Geremio, in a fit of personal turmoil, slams his clenched fist down onto a rod-iron fence post leaving a large gash in his palm. This tendency of Geremio's to turn his frustration in on himself posits capitalism—within the context of the film—as an existential struggle for which the only cure is an external support system.

Desperate for a different landscape, Geremio and Annunziata spend their spare time in the less urbanized Brooklyn borough, tending to their future home, and yet while there are no skyscrapers or low ceilings, in the suburbs the two are never free from the confines of the frame itself, which extends the notion of freedom to the cinematic landscape. After all, what we are watching is art originating from a singular perspective that extolls the virtues of collective strength. It is this conflict of ideology that highlights the central thesis of Christ in Concrete, that a pursuit of personal freedom is an ethical contradiction that feeds into the cyclical nature of tragedy intrinsic to Dmytryk's vision of consumer culture.

Geremio leaves his family and betrays his co-workers for what he sees as an opportunity for emotional and economic progression only to realize that without them he is a both weak and self-destructive. After reuniting with his union brothers Geremio still finds himself feeding the source of his oppression by supervising the construction of a new tenement. It is here that Geremio meets his absolution in an industrial accident, buried under wet cement while trapped inside a cylindrical support beam, pleading for the help of his comrades. He finds that though he once saw this type work as a means to a better landscape, in actuality he was merely encasing himself in a frame within a frame within a frame.

It would be inaccurate to say that time and hind-sight have made the overt socialist message of Christ in Concrete more palatable. The film still remains out of print domestically and largely marginalized outside of small communities of film historians. This is perhaps a fitting denouement for a piece so fixated on the dangers of singularity—that where it ultimately finds its strength is in the context of a larger historical landscape.